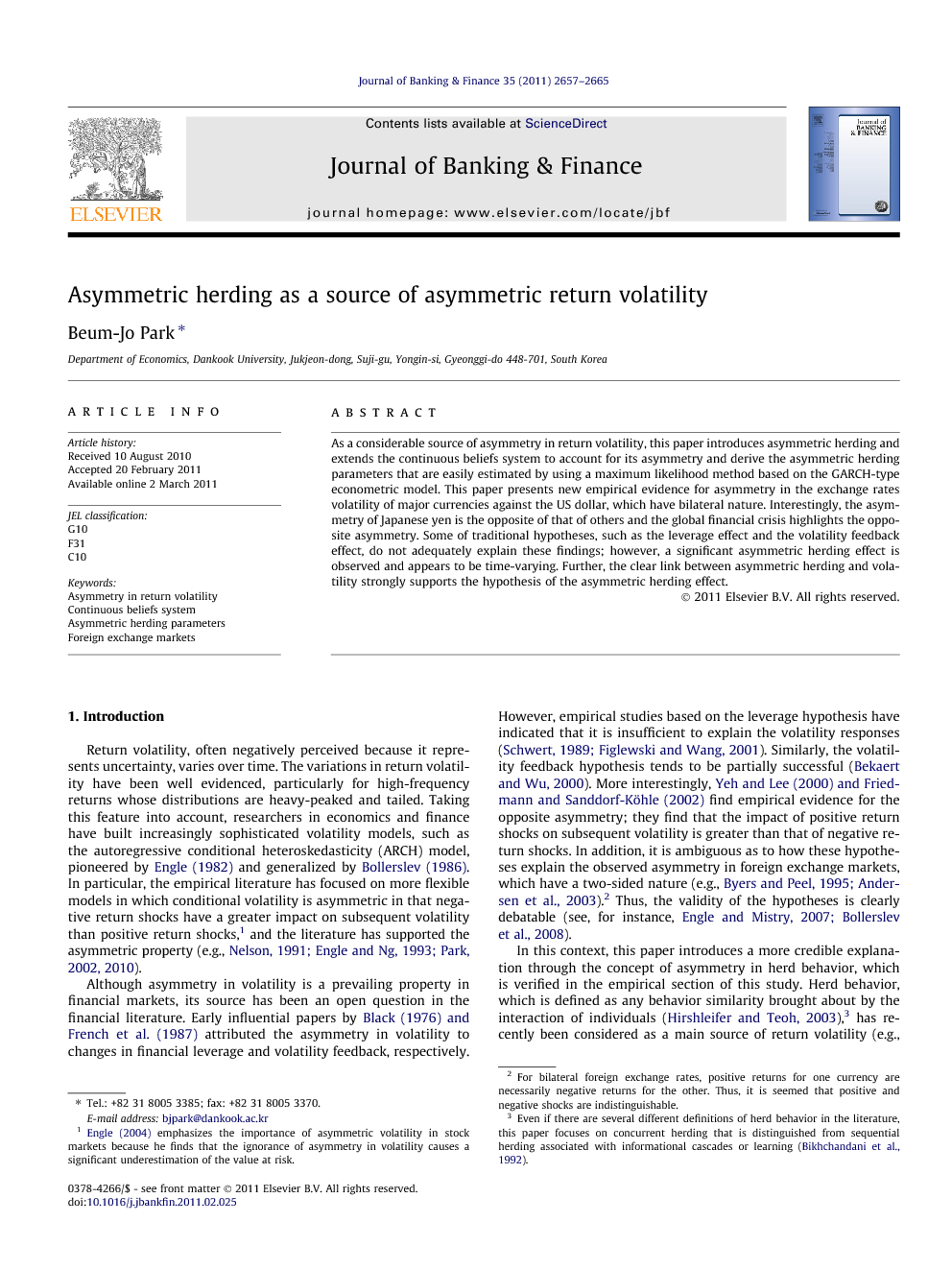 Return volatility, often negatively perceived because it represents uncertainty, varies over time. The variations in return volatility have been well evidenced, particularly for high-frequency returns whose distributions are heavy-peaked and tailed. Taking this feature into account, researchers in economics and finance have built increasingly sophisticated volatility models, such as the autoregressive conditional heteroskedasticity (ARCH) model, pioneered by Engle (1982) and generalized by Bollerslev (1986). In particular, the empirical literature has focused on more flexible models in which conditional volatility is asymmetric in that negative return shocks have a greater impact on subsequent volatility than positive return shocks,1 and the literature has supported the asymmetric property (e.g., Nelson, 1991, Engle and Ng., 1993, Park, 2002 and Park, 2010). Although asymmetry in volatility is a prevailing property in financial markets, its source has been an open question in the financial literature. Early influential papers by Black, 1976 and French et al., 1987 attributed the asymmetry in volatility to changes in financial leverage and volatility feedback, respectively. However, empirical studies based on the leverage hypothesis have indicated that it is insufficient to explain the volatility responses (Schwert, 1989 and Figlewski and Wang, 2001). Similarly, the volatility feedback hypothesis tends to be partially successful (Bekaert and Wu, 2000). More interestingly, Yeh and Lee, 2000 and Friedmann and Sanddorf-Köhle, 2002 find empirical evidence for the opposite asymmetry; they find that the impact of positive return shocks on subsequent volatility is greater than that of negative return shocks. In addition, it is ambiguous as to how these hypotheses explain the observed asymmetry in foreign exchange markets, which have a two-sided nature (e.g., Byers and Peel, 1995 and Andersen et al., 2003).2 Thus, the validity of the hypotheses is clearly debatable (see, for instance, Engle and Mistry, 2007 and Bollerslev et al., 2008). In this context, this paper introduces a more credible explanation through the concept of asymmetry in herd behavior, which is verified in the empirical section of this study. Herd behavior, which is defined as any behavior similarity brought about by the interaction of individuals (Hirshleifer and Teoh, 2003),3 has recently been considered as a main source of return volatility (e.g., Bikhchandani et al., 1992). Prior herding research has focused mainly on the symmetric response with respect to return shocks. In sharp contrast to earlier contributions, however, the present paper focuses on the asymmetry in herding to explain asymmetric volatility. Therefore, the scenarios for the asymmetric volatility phenomenon can be described as follows. According to the noisy rational expectations models of Hellwig, 1980 and Campbell et al., 1993, informed trades tend to result in zero autocorrelation in asset returns, whereas uninformed trades tend to result in non-zero autocorrelation in asset returns. As uninformed trades are potentially related to herding, we can surmise that negative return shocks give rise to the high degree of dependence among uninformed market participants through mimic trades because uninformed market participants are likely to avoid the stress of expected investment risk generated from turbulent movements in market fundamentals (Bekaert, 1996), and the strong act of bringing uninformed market participants together into one of heterogeneous groups governs the increase in subsequent volatility. On the contrary, positive return shocks give rise to the low degree of dependence among market participants with less mimic trades because of the reduction of expected investment risk, and the weak herding, implying higher trading activity by informed market participants, reduces subsequent volatility. However, it is worthwhile to note that, infrequently, the opposite asymmetry in herd behavior is expected when the influence of good news is exaggerated via a speculative market exhibiting overconfidence or a self-perpetuating cycle (e.g., some financial markets in rapidly developing countries experiencing an overheating economy).4 This paper also supports the hypothesis of the asymmetry in herding by the theoretical model extended from a continuous beliefs system (Diks and van der Weide, 2003) belonging to an agent based economic model, which has benefits because price dynamics can easily be incorporated into herd behavior by simply introducing a term representing agents’ mutual dependence into each agent’s utility function. In turn, this paper conducts an empirical analysis by deriving asymmetric herding parameters from the extended model. The asymmetric herding parameters are quite valuable because they detect the herding strength in a dynamic model. Although herd behavior in financial markets has been well documented, few studies have examined the influence of herding on volatility by using empirical methods. The main reason for this is the technical difficulty of measuring herd behavior with time series data. For example, popular methodologies for measuring herd behavior, such as a cross-sectional standard deviation of returns (CSSD) (Christie and Huang, 1995) or an LSV measure (Lakonishok et al., 1992), are not well suited for measuring herding on asset price dynamics and examining the dynamic relationship between herd behavior and volatility. Furthermore, the asymmetric herding parameters can explain the conflicting empirical evidence regarding the presence of herd behavior during periods of market stress5 because the mixed empirical results may be partly due to the dismissal of the asymmetric property in existing herding models. This paper empirically verifies whether asymmetric herding exists in foreign exchange markets and investigates how asymmetric herding is associated with asymmetric volatility. For these purposes, this paper estimates Nelson’s (1991) exponential GARCH model and a GARCH-type econometric model derived from the extended continuous belief system with asymmetric herding by using the daily closing spot prices for the USD/GBP, USD/EUR, USD/JPY, and USD/KRW currency pairs between January 2, 2003 and December 30, 2009. The rest of this paper proceeds as follows. Section 2 describes the theoretical framework based on an extended continuous belief system and derives the asymmetric herding parameters. For the practical implementations of the results, Section 3 develops the GARCH-type econometric model that accounts for asymmetric herding. Using daily data on exchange rates of major currencies against the US dollar, Section 4 provides some empirical evidence for asymmetry in herding and volatility, analyzes the effect of the global financial crisis on the asymmetry, and verifies the validity of our approach. Section 5 concludes with brief suggestions for future research.