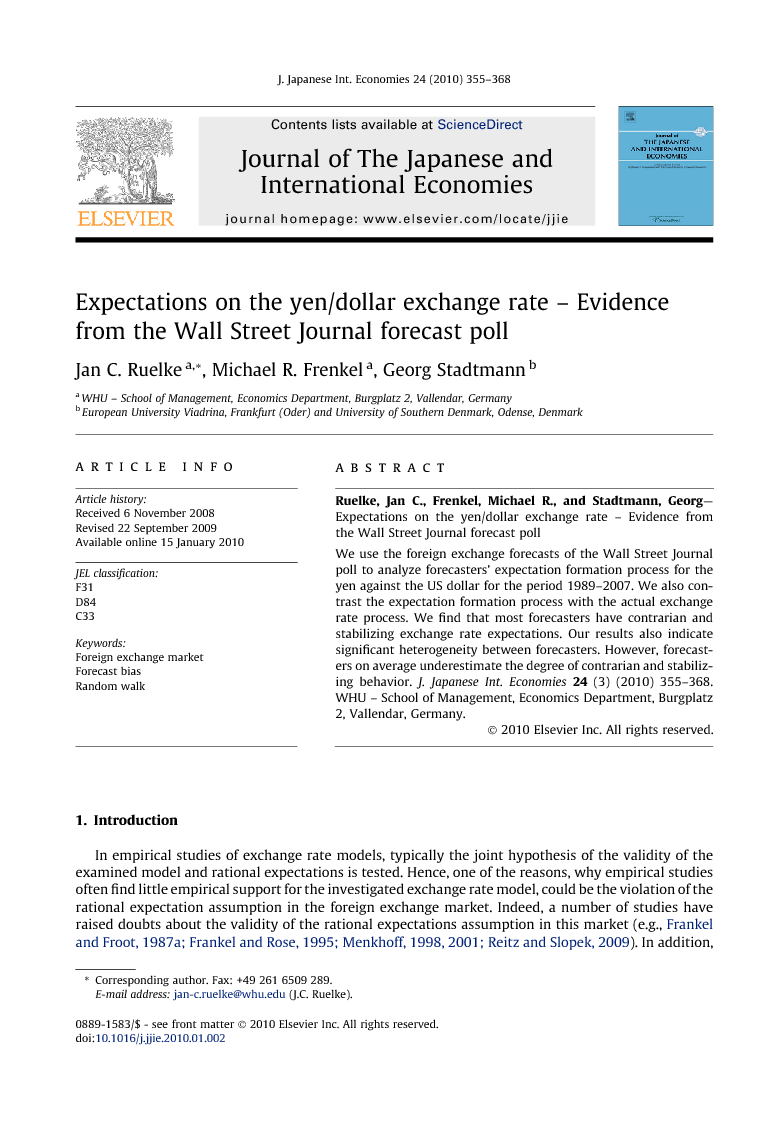 We use the foreign exchange forecasts of the Wall Street Journal poll to analyze forecasters’ expectation formation process for the yen against the US dollar for the period 1989–2007. We also contrast the expectation formation process with the actual exchange rate process. We find that most forecasters have contrarian and stabilizing exchange rate expectations. Our results also indicate significant heterogeneity between forecasters. However, forecasters on average underestimate the degree of contrarian and stabilizing behavior.

In empirical studies of exchange rate models, typically the joint hypothesis of the validity of the examined model and rational expectations is tested. Hence, one of the reasons, why empirical studies often find little empirical support for the investigated exchange rate model, could be the violation of the rational expectation assumption in the foreign exchange market. Indeed, a number of studies have raised doubts about the validity of the rational expectations assumption in this market (e.g., Frankel and Froot, 1987a, Frankel and Rose, 1995, Menkhoff, 1998, Menkhoff, 2001 and Reitz and Slopek, 2009). In addition, most empirical exchange rate studies implicitly follow the assumption of traditional exchange rate models which claim that financial agents can be viewed as homogenous. However, studies of the micromarket structure suggest that there could be different groups of traders. This led several researchers to develop models in which the rational expectation assumption is relaxed and different types of actors in the currency market are considered (e.g., Frankel and Froot, 1987b, Frankel and Froot, 1990 and DeLong et al., 1990). In this paper, we use data of the Wall Street Journal (WSJ) poll in order to analyze the characteristics of the expectation formation process for the yen/dollar exchange rate. Therefore, we apply the WSJ survey to shed light on two aspects of the expectation formation process. The first aspect refers to the question of how expectations are formed. The second aspect deals with the question whether the forecasters1 can be regarded as homogenous. The main advantage of the WSJ data set is that we can observe individual exchange rate expectations of a large number of forecasters and not only the mean or median of a group of forecasters. This feature allows us to analyze both the time series as well as the cross-sectional characteristics of the data set by applying panel econometric methods. The possibility to observe individual expectations distinguishes the WSJ data set from other data sets like the one compiled by Reuters and used by Leitner et al. (2003). Another advantage of the WSJ data set is that the poll has been conducted for about 20 years. By contrast, the study of Ito (1990) – who also operates with individual data – covers only the time period May 1985–June 1987. Hence, the time dimension in Ito (1990) is limited to a 2-year horizon. The data set of Ito (1990) is updated by Elliott and Ito (1999) and covers the period May 1985–May 1996. They find that the survey data are not the best predictor of future spot rates in terms of typical mean squared forecast error criteria. However, they also find that the survey data include information value in the sense that they can be used to generate profits. The remainder of the paper is structured as follows. In the next section, we describe details of the WSJ data set. In Section 3, we examine the question whether expectations are formed rationally. In Section 4, we investigate the expectation formation process in more detail and compare it to the actual exchange rate process. Section 5 examines the relationship between the forecast accuracy and the expectation forming process while Section 6 concludes.