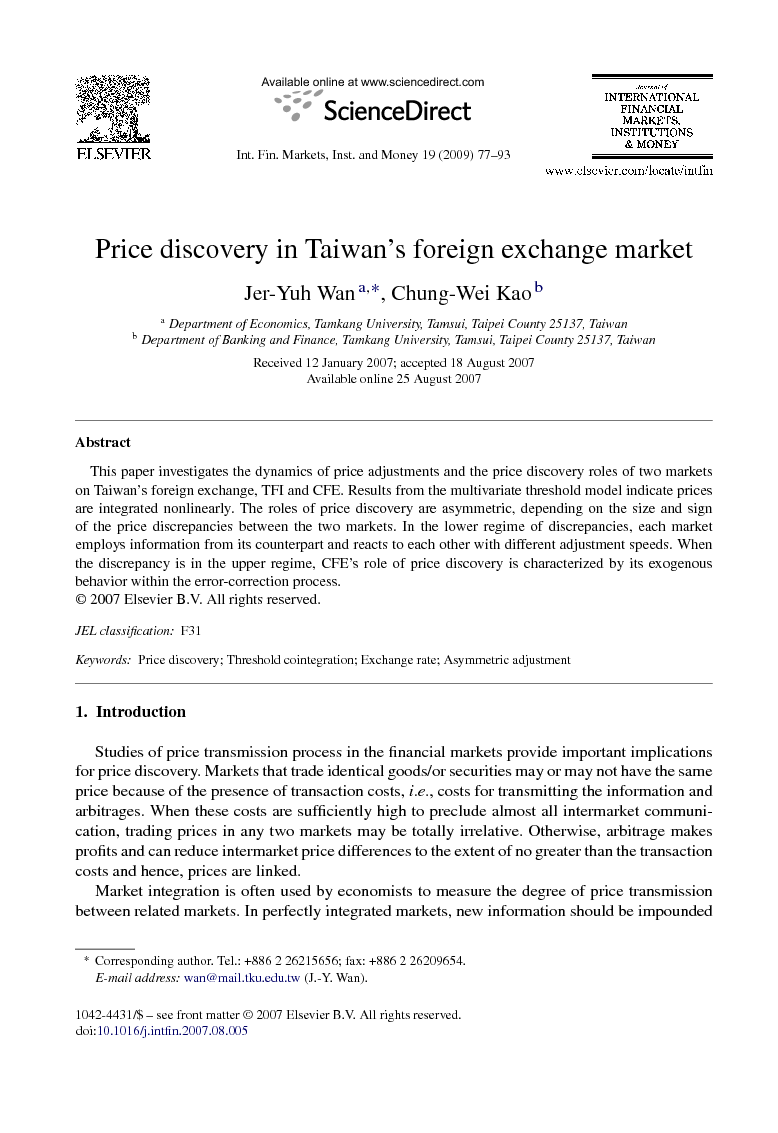 This paper investigates the dynamics of price adjustments and the price discovery roles of two markets on Taiwan's foreign exchange, TFI and CFE. Results from the multivariate threshold model indicate prices are integrated nonlinearly. The roles of price discovery are asymmetric, depending on the size and sign of the price discrepancies between the two markets. In the lower regime of discrepancies, each market employs information from its counterpart and reacts to each other with different adjustment speeds. When the discrepancy is in the upper regime, CFE's role of price discovery is characterized by its exogenous behavior within the error-correction process.

Studies of price transmission process in the financial markets provide important implications for price discovery. Markets that trade identical goods/or securities may or may not have the same price because of the presence of transaction costs, i.e., costs for transmitting the information and arbitrages. When these costs are sufficiently high to preclude almost all intermarket communication, trading prices in any two markets may be totally irrelative. Otherwise, arbitrage makes profits and can reduce intermarket price differences to the extent of no greater than the transaction costs and hence, prices are linked. Market integration is often used by economists to measure the degree of price transmission between related markets. In perfectly integrated markets, new information should be impounded simultaneously into related markets. However, real-world institutional factors, such as liquidity, costs and restrictions on trading, often create an empirical lead–lag relationship between alternative markets. The market that provides greater liquidity, lower transaction costs, and fewer restrictions is likely to play a more important role in price discovery (Chan, 1992 and Tse et al., 2006). A better understanding of the price/information transmission process allows the investors to take advantages of more efficient trading strategies in financial markets. Taiwan's foreign exchange is traded dually in separated markets. Two private-owned brokerage firms provided the same service, that is, the interbank US dollar trading, since late 1990s. With their own trading systems1, prices are quoted respectively. Closing prices of the two markets may not be the same on each trading day. In addition, different histories of each market lead to the difference on trading volume as well as the market shares. The older market, Taipei Forex Inc. (TFI, for short), evolved from a government-backed trade agency in July, 1994, is now held purely by local banks. The younger one, Cosmos Foreign Exchange International Co. (CFE) was founded under the deregulation policies on Taiwan's foreign exchange and was invested/held by local banks, local private enterprises, and foreign companies in May 1998. Based on the long history of trading with major local banks in Taiwan, TFI shared 80% of the market until the end of 1999. It is postulated by market participants that the Central Bank of Taiwan conducts exchange rate interventions through trading in TFI. However, this postulation has not been supported by any official documents released. On the other hands, as Taiwan's foreign exchange market grew 2.42 times in the period from 1999 to July 2005, market share of CFE has increased significantly from below 20% to about 30%, indicating the role of price discovery in CFE may arise with its faster growing trading volume. The interbank US dollar trading in Taiwan has been quoted dually for over 8 years since CFE entered the market. However, to our knowledge, no attention has been paid to the role of price discovery and the price adjustments process in Taiwan's dually traded foreign exchange market. The purpose of this study is twofold: first, we investigate whether the two separated trading markets (TFI and CFE) are integrated with each other, so that prices are linked. Secondly, in the presence of information and price transmission, we examine the price adjustment process to determine which market takes the role on price discovery. The second aim contains important implications not only for market investors, but also for the monetary authority, namely, the central bank. The Central Bank of Taiwan should conduct its foreign exchange interventions through trading in the dominant market to which prices in the counterpart market will move towards. By using a multivariate threshold model, our results indicate a nonlinear and cointegrated price relationship between the two markets. The NT/US exchange rate dynamics is influenced by the size and signs of deviations from the long-run equilibrium. When deviation is small and within a band (the middle regime), no price adjustments take place due to the absence of arbitrage. When deviation is large enough and outside a band (the outer regimes), the equilibrium errors become mean-reverting and markets are integrated. The asymmetric price adjustment process, demonstrated by a threshold error-correction model (ECM), indicates the two markets respond to information shocks differently across regimes. When deviation is in the lower regime, both markets incorporate price information from their counterpart and adjust to equilibrium with different speed, which suggests that both markets contribute to the process of price discovery. However, as deviation is in the upper regime, exogenous behavior of CFE to the equilibrium errors indicates the adjustments towards equilibrium is taken place in TFI only, and hence, suggests the NT/US exchange rates are primarily led by the price dynamics in CFE market. The following section describes the role of price discovery in markets that trade identical goods. The method for testing the interrelationships is also provided. Section 3 outlines the data and demonstrates the empirical results. Section 4 examines the mean-reverting properties of the estimated nonlinear models by a generalized impulse response function (GIRF). The final section concludes.

This paper investigates the long-run relationship and short-run adjustments of the NT/US exchange rates on two separately traded markets in Taiwan. Evidence indicates the two markets are integrated with a threshold effect. Short-run adjustments in response to the equilibrium errors are asymmetric, depending on the sizes and signs of the errors. Price series do not engage in error correction process when the price discrepancies are small and within the middle regime. However, the price discrepancy becomes mean-reverting once the equilibrium error is large enough and beyond a threshold. The results are consistent with the arbitrage behaviors under the consideration of transaction costs. Two thresholds provide the band of non-profitable arbitrage opportunities. Both series in the lower regime respond to the previous price discrepancy. This result indicates prices in each market are established by the information revealed on the counterpart market. Price adjustments take place in both markets to maintain the long-run equilibrium. However, if price discrepancies were in the upper regime, prices in CFE did not respond to the equilibrium errors. The error correction process will be completed only by the adjustments in TFI, which signals the leading role of CFE in the price discovery process. The nonproportionality of the impulse response functions verifies the nonlinearity in the adjustment process. The observation that large shocks decay faster than those for small shocks is in compliance with the hypothesis on arbitrage activities. The longer time that TFI needs to adjust towards equilibrium indicates TFI is the follower of CFE in the price adjustment process. The empirical results in the threshold regression provide important implications not only for the investors in Taiwan's foreign exchange market, but also for policy makers. The fact each market employs information from the other in forming its own price expectation will only take place when the price deviation is in the lower regime. Prices are independent of each other in the central band. Prices in CFE lead the price adjustments in TFI and the opposite is not true when the deviations are in the upper regime. If the foreign exchange interventions were conducted through operating in TFI only, evidence suggests the effects of intervention depend on the sizes and signs of the price differences between the two markets. An effective intervention can only be possible when the price in CFE is lower than that in TFI to some extent beyond the threshold. Otherwise, interventions in TFI in attempts to guide the trends of NT/US exchange rates will be in futile.