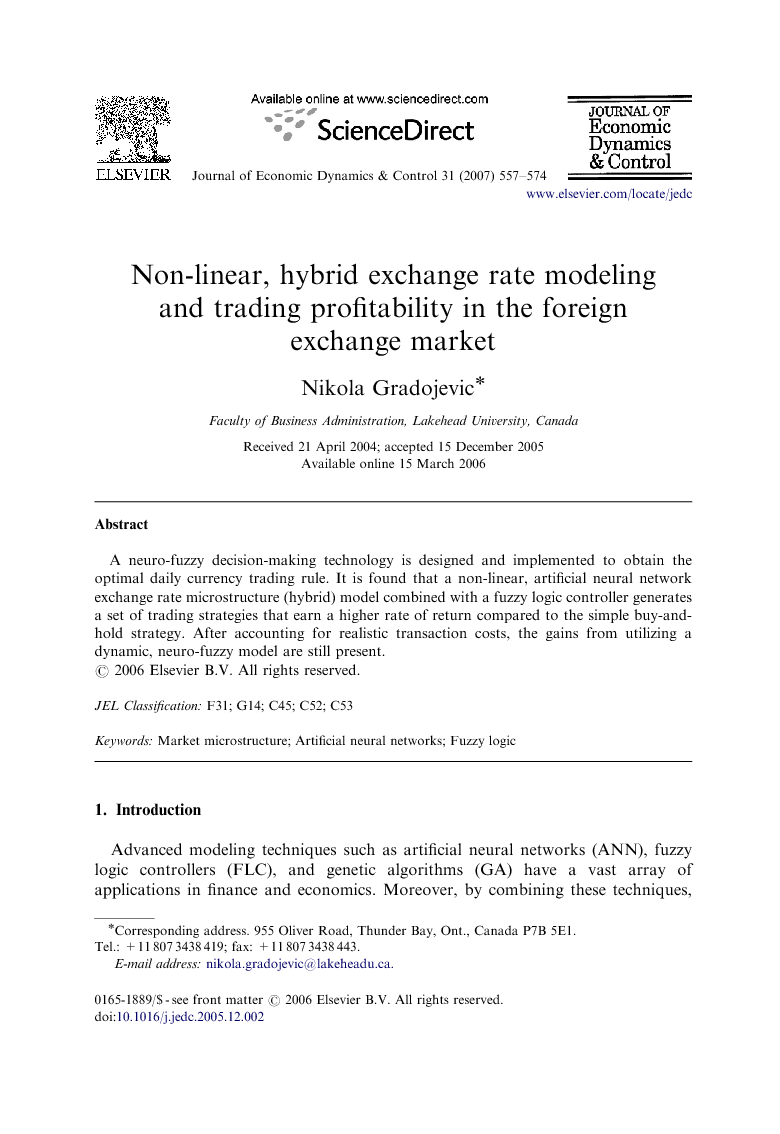 A neuro-fuzzy decision-making technology is designed and implemented to obtain the optimal daily currency trading rule. It is found that a non-linear, artificial neural network exchange rate microstructure (hybrid) model combined with a fuzzy logic controller generates a set of trading strategies that earn a higher rate of return compared to the simple buy-and-hold strategy. After accounting for realistic transaction costs, the gains from utilizing a dynamic, neuro-fuzzy model are still present.

Advanced modeling techniques such as artificial neural networks (ANN), fuzzy logic controllers (FLC), and genetic algorithms (GA) have a vast array of applications in finance and economics. Moreover, by combining these techniques, more complex problems can be addressed. This paper combines two of the most popular concepts: ANN and FLC. There has been a growing literature on FLCs and their use in financial economics. Many of these examples, such as ones for portfolio management and stock market trading, can be found in Deboeck (1994). Further, Bojadziev (1997) uses FLC for evaluating a client's risk tolerance level based on his/her annual income and total net worth. Peray (1999) determines an opportunity for equity fund investments using well-established technical indicators (e.g., the gap from the moving average) and market fundamentals (GDP, inflation rate, interest rate, etc.). Also, fuzzy logic can be used to explain non-linearities in interest rates (Ju et al., 1997). In Japan, fuzzy logic is used in a foreign exchange trading system to forecast the Japan/U.S. exchange rate. This system uses fuzzy logic rules to make inferences based on economic news that may affect the currency market (Yuize, 1991). Tseng et al. (2001) integrate fuzzy and ARIMA models to forecast the Taiwan/U.S. exchange rate and Tay and Linn (2001) model agent's reasoning process in an artificial stock market with fuzzy logic. Recently, using a fuzzy logic (technical trading) pattern-recognition model, Zhou and Dong (2004) find significant abnormal returns in a large sample of AMEX, NASDAQ and NYSE stocks. This paper develops an original and novel approach to generating trading strategies in the foreign exchange (FX) market based on forecasts from an ANN hybrid exchange rate model.1 Fuzzy reasoning is combined with ANN-generated one-day-ahead Canada/U.S. exchange rate forecasts into a dynamic neuro-fuzzy (NF) model. This enables one to investigate the evolution of NF-defined strategies over different periods in 1990s. In recent literature that tackles the problem of generating trading strategies, either the efficacy of technical analysis is tested (Osler, 2000; Lo et al., 2000; Brock et al., 1992; Levich and Thomas, 1993; Gençay, 1998) or the search for improved technical trading models is conducted (Allen and Karjalainen, 1999). The approach applied in this work departs from recent research in this area in that the strategies contain macroeconomic and microstructure effects processed by the ANN. In addition to this, a fuzzy logic approach is employed to obtain a smoother decision surface. Previous studies were able to generate only discrete buy or sell trading signals while this papers’ trading strategies are more continuous. There are several characteristics that distinguish the NF trading rules developed in this paper from technical trading rules. First, the searching space is different. For technical trading rules the searching space consists only of past prices, while for NF trading rules the searching space contains fundamental variables, such as interest rate differential, and market order flow variables. Second, the question of which trading rules are important is subtly different. Instead of checking whether specific rules work, this paper sheds light on whether an optimized ANN combined with FLC can be used to generate a single trading strategy. Third, fuzzy logic is employed in this paper to link the forecasting value to a decision space. One advantage of fuzzy logic is that it can make a decision space more continuous. Instead of generating discrete ‘buy’ or ‘sell’ signals, fuzzy logic provides much finer trading decisions, for example, invest 60% of the Canadian currency endowment or ‘hold’ (preserve the current position) etc. Since it accounts for both fundamental and microstructure variables, the NF signal can also be understood as an empirical balance between trading rules used by two types of agents in a dynamic heterogeneous agent model (Hommes, 2006; LeBaron, 2006). In these highly non-linear models, agents choose from two classes of investment rules, fundamental and technical trading rules. Clearly, the NF model directly relies on fundamental explanatory variables. As will be defined in Section 2, microstructure variables reflect all past private (and to some extent public) information and, in that sense, they are related to technical trading rules. Therefore, the NF approach is complementary to agent-based models and, in addition, it offers a more sophisticated and general framework for generating trading rules. Given the failure of structural FX rate models to predict exchange rate fluctuations correctly (Meese and Rogoff, 1983), this paper employs a model motivated by the recent evidence that the behavior of dealers and other market participants can influence equilibrium exchange rates. For example, it is found that order flow has transitory effects on price (Lyons and Evans, 2002) and that dealers increase bid-ask spreads to protect themselves against informative incoming order flows (Lyons, 1995). This paper extends the FX model by Lyons and Evans (2002) in several important directions. First, it controls for more than one macroeconomic determinant (as identified by Amano and van Norden, 1995) – the price of crude oil – and more than one order flow type (foreign institution and commercial client transactions are added).2 Second, it employs a non-linear method (ANN). As opposed to Lyons and Evans (2002) who are unable to generate statistically significant out-of-sample forecasts, the ANN model provides statistically significant forecast improvements over the random walk model.3 A brief data description is presented in Section 2. Fuzzy logic concept basics are explained in Section 3. The fourth section presents the NF design. Results are reported in Section 5, while Section 6 concludes the paper.

Exchange rate forecasting using ANNs and FLCs has recently received much attention. This paper proposed a neuro-fuzzy (NF) technology to learn both the Canada/U.S. one-day-ahead exchange rate forecast (incorporating both public and private information) and the corresponding trading recommendation. The results indicate that it is sensible to use fuzzy logic as an extension to an ANN forecasting model. Specifically, the NF model consistently provides excess returns over a simple buy-and-hold strategy after realistic transaction costs are accounted for. In addition, when compared to the random walk model, the out-of-sample sign predictions of the ANN part of the NF model are statistically significant according to the Diebold and Mariano statistic. Moreover, the Pesaran–Timmermann test shows that the forecasts exhibit a significant market timing ability. These results are consistent across the three sub-samples considered in this paper. The FLC consists of one input, one output, and a very simple rule base. A set of technical trading rules could be added to a rule base. Consequently, new inputs, which may include moving averages, lagged exchange rates, would bring more decision-making power to an overall NF system. An adaptive FLC (Cox, 1993) which allows for membership function changes (e.g., widening ‘hold’ fuzzy region) and weighting or changing the rules in the rule base may improve the NF system's performance and motivate further research.