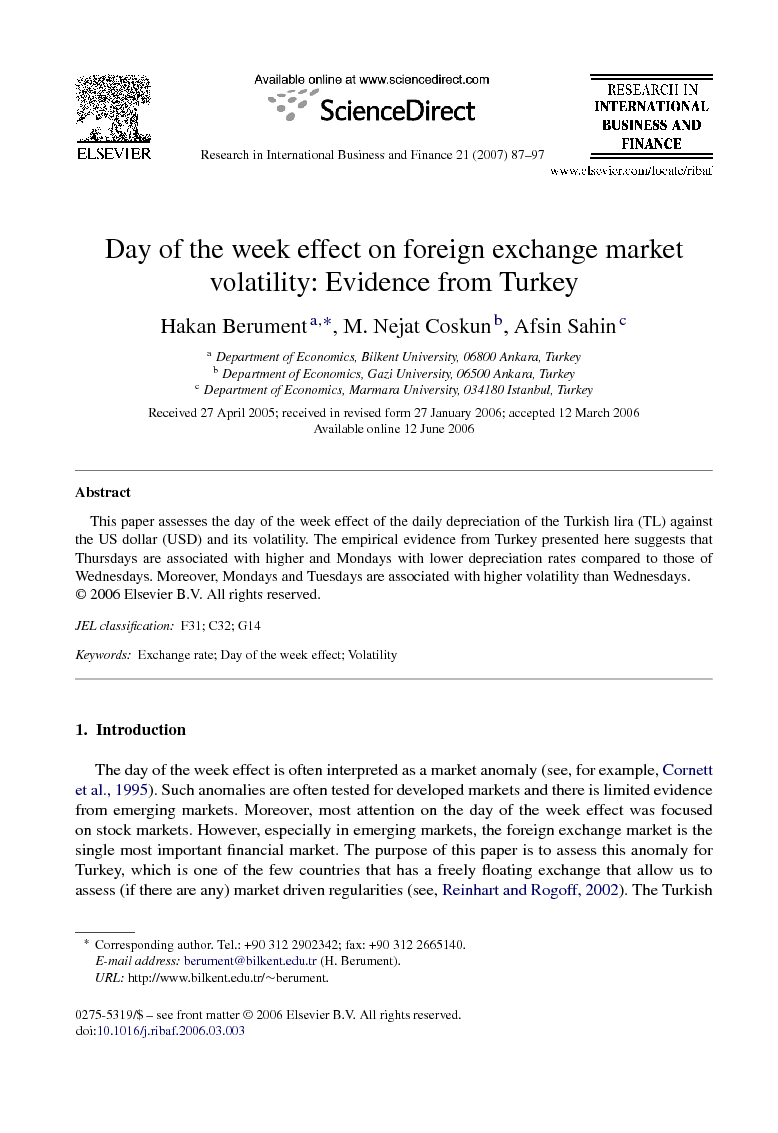 This paper assesses the day of the week effect of the daily depreciation of the Turkish lira (TL) against the US dollar (USD) and its volatility. The empirical evidence from Turkey presented here suggests that Thursdays are associated with higher and Mondays with lower depreciation rates compared to those of Wednesdays. Moreover, Mondays and Tuesdays are associated with higher volatility than Wednesdays.

This paper assesses the day of the week effect on foreign exchange rate changes and their volatility with an EGARCH specification. The day of the week effects are presented in mean and volatility specifications. The evidence presented in this paper suggests that: (1) Thursdays are associated with higher and Mondays with lower returns when compared to Wednesdays; (2) Mondays and Tuesdays are associated with higher volatility than Wednesdays; (3) there is a positive relationship between exchange rate volatility and the daily depreciation rate; and (4) a decrease in depreciation creates more volatility than an increase (the leverage effect). The efficient market hypothesis implies that investors will develop strategies to explore any regulatory pattern that may exist in financial markets. Therefore, the presence of the day of the week effect as one of the most important financial market anomalies is often promoted as a conflict with the efficient market hypothesis. Similarly, the disappearance of the day of the week effect is interpreted as higher efficiency in the markets (see, for example, Yamori and Mourdoukow, 2003). Kohers et al. (2004) note transaction cost and time varying risk premium as sources of the regularity, which may not be tied to market (in) efficiency directly. However, Yamori and Kurihara (2004) tie this disappearance in financial markets to deregulation and globalization. This study is an attempt to account for the time varying risk premium and show that the day of the week effect is present in the Turkish foreign exchange market. Thus, one may concentrate on transaction cost or other determinants of inefficiency by deregulating the financial markets and helping the acceleration of globalization to boost the efficiency in the Turkish foreign exchange market.