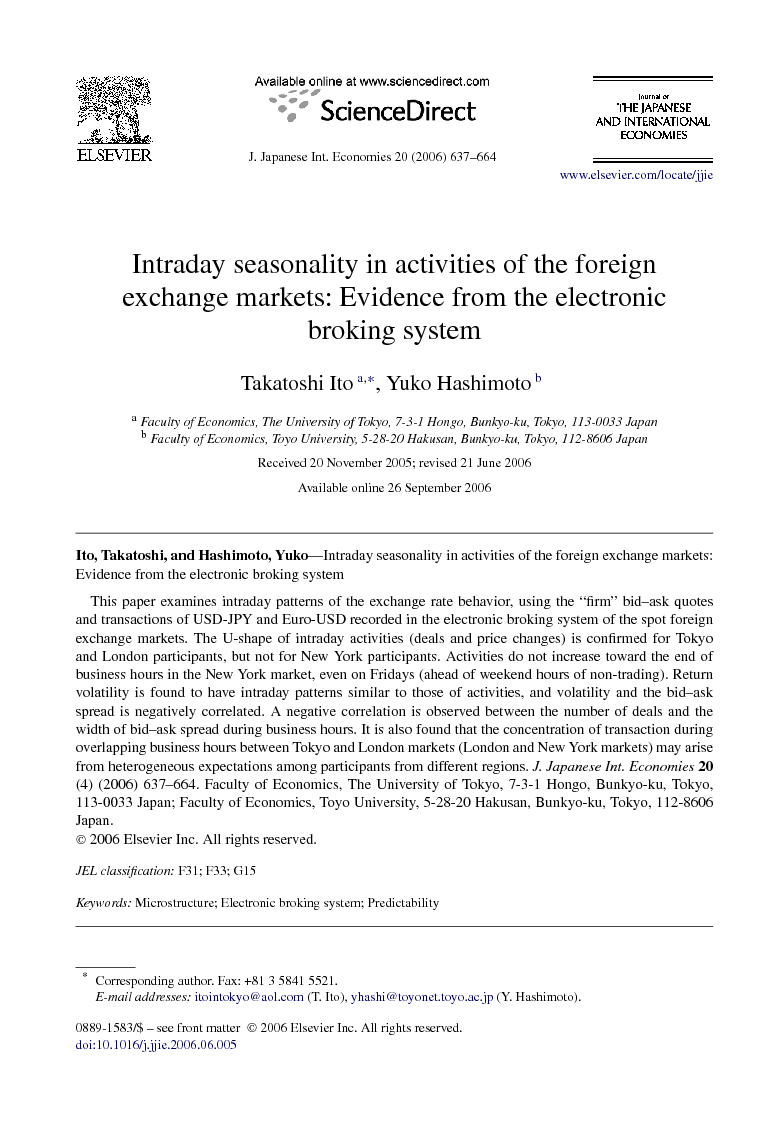 This paper examines intraday patterns of the exchange rate behavior, using the “firm” bid–ask quotes and transactions of USD-JPY and Euro-USD recorded in the electronic broking system of the spot foreign exchange markets. The U-shape of intraday activities (deals and price changes) is confirmed for Tokyo and London participants, but not for New York participants. Activities do not increase toward the end of business hours in the New York market, even on Fridays (ahead of weekend hours of non-trading). Return volatility is found to have intraday patterns similar to those of activities, and volatility and the bid–ask spread is negatively correlated. A negative correlation is observed between the number of deals and the width of bid–ask spread during business hours. It is also found that the concentration of transaction during overlapping business hours between Tokyo and London markets (London and New York markets) may arise from heterogeneous expectations among participants from different regions. J. Japanese Int. Economies20 (4) (2006) 637–664.

The foreign exchange market remains sleepless. Someone is trading somewhere all the time—24 hours a day, (almost) 7 days a week. Analyzing the behavior of the exchange rate has become a popular sport of international finance researchers, while global financial institutions are investing millions of dollars to build a real-time computer trading scheme. High-frequency, reliable data are the key in finding robust results for researchers or profitable schemes for businesses. The objective of this paper is to analyze intraday patterns, or seasonality, of market activities—frequency of quote revisions, transaction volumes, volatility, and bid–ask spread—of the dollar/yen and the euro/dollar spot exchange rates using a newly available data of the electronic broking system for the spot foreign exchanges.1 The intraday seasonality is in itself interesting but it serves as a basis for further theoretical and empirical analysis.2 Some of our findings will be confirmation of what has been established in the literature with less reliable data, and some results, concerning behavior of the bid–ask spread, are new. The overwhelming majority of the spot foreign exchanges are now transacted through the global electronic broking systems—the EBS and Reuters D3000. The data, provided by the EBS, consist of global electronic broking bid–ask quotes, lowest given and highest paid transaction prices, and transaction volumes for three years starting January 01, 1999 at the frequency of every one minute.3 The EBS data set has advantage over the frequently-used, indicative quotes of a foreign exchange market tick-by-tick data set, such as FXFX of Reuters, in at least two important aspects. First, the quotes in the EBS data set are “firm,” in that banks that post quotes are committed to trade at those quoted prices, when they are “hit.”4 In contrast, the indicative quotes of FXFX screen are those input by dealers for information only, without any commitment for trade. Indicative quotes are much less reliable than firm quotes in capturing the whole picture of market reality. Second, transactions data available in the EBS data set is simply not available in the FXFX screen. Although exact trading volumes are not disclosed, transactions counts (counts of seconds that had at least one transaction) and trade volume shares (a daily percentage share of trading volumes in one minute) are available in the EBS data set. The contribution of this paper to the literature is three-fold. First, the paper presents a careful description of intraday seasonality (quote revisions, trading volumes, volatility, and bid–ask spread), taking into account time zone and daylight saving time of major markets, and national holidays. Over different GMT hours, quote revision frequency, trading volume, and return volatility are found to move together whereas the spread moves the opposite way, most of the time. Second, the U-shaped pattern of quote revision frequency and trading volume shares is found for both Tokyo and London participants, but no daily U-shaped patterns for New York participants. Effects of overlapping hours on price changes and transaction volumes seem to be large. Third, with regard to the intraday patterns of the bid–ask spread, the following tendencies were established for most hours during the day, except possibly the opening hour of the Tokyo market: a negative correlation between the number of deals and the width of bid–ask spread; the negative correlation between the bid–ask spread and price volatility. The discovery of the last correlation is interesting because it contrasts to an observed intraday pattern in the equity market. In FOREX market, activity (quote revision and trading) and volatility are highest in ordinary opening hours of all three markets, but there is no increase at the end of the day. This contrasts to the equity markets where activity is U-shaped with a rise at the end of the day as well as at the beginning. For the transaction in the equity market, see, for example, Wood et al. (1985). Another big difference between FOREX and equity markets is the correlation coefficient of the spread and activities (deals and price revisions). The paper finds that the spread is narrower during the hours of high activities in the FOREX market, and this is opposite of the conventional wisdom of the equity markets. The rest of this paper is organized as follows: Section 2 describes the data. Section 3 establishes intraday seasonality of activities. In Section 4, various econometric tests are conducted to confirm statistically the patterns. Section 5 examines the London and New York opening effects, that is the extent of higher activity at the opening business hours. Section 6 concludes the paper.

In this paper, the intra-daily patterns were investigated from the rich data sets of EBS quotes, deals and relative trading shares. Some of the findings are well known such as the high activities at the opening of the market, high correlations between quote entries and deals, and higher activities being associated with narrow spreads. However, some of the findings are somewhat surprising. The following observations are new in the literature. First, there is no U-shaped intraday activity pattern in the dollar/yen or euro/dollar market in New York market. The activities are high during the opening hours but not ending hours. Careful observations on the peak of activities, exploiting the difference between Tokyo and New York in adoption of summer (daylight saving) and winter time to conclude where the activities originate during the overlapping business hours. There is no surge in activities toward the end of the New York afternoon hours. Even on Fridays, there is no pick up in activities in the NY afternoon hours. Second, intraday patterns of activities and bid–ask spreads are quite stable over the time (yearly comparison). Namely, the peak of activities is observed in the opening hours (9 am in Tokyo; 8 am in Europe/7 am London, and 8–10 am New York), and the troughs are late afternoon hours of New York, with significant drops during the lunch hours in Tokyo and, to the lesser extent, in European lunch hours. Third, the bid–ask spread is generally negatively correlated with the indicator of activities: Higher activities are associated with narrow spreads and low activities are associated with wide spreads. However, the first hour, or to be more specific the first half hour of the Tokyo market (GMT Hour 0) has a slightly wider spread than other hours of comparable activities. Fourth, from observations of the figures, we found that a home-market bias in the foreign exchange market is significant. The yen is traded more by Tokyo financial institutions (Tokyo–Tokyo deals, Tokyo–London deals, in particular) and the euro is traded more by London financial institutions (London–London deals, London–New York deals, in particular). In total, about half of yen trades are attributable to the Tokyo financial institutions and more than half of euro trades are attributable to the London financial institutions. Fifth, it is interesting to know that the overlapping business hours encourage inter-regional transactions and overall surges in activities. For both the yen and the euro, the London–New York deal share is the highest, and the Tokyo–New York deal share is the lowest. This may reflect the fact that participants from other regions may have different reactions to the same news, and resulting in the deal. Sixth, a rigorous analysis of the opening hour effects of London and New York, and lunch hour effects of London, taking advantage of the one-hour shift between the regular and daylight saving times, we find that there are significant opening hour surge and lunch hour decline in activities (the number of deals and the number of price changes). However, there seems to be insignificant effects on the bid–ask spread from the London or New York openings or London lunch hour. These features are common between the yen and the euro trading. Finally, a positive correlation between the price change and the inter-regional trading share was found for overlapping business hours between Tokyo and London, and also for those between London and New York. When information, both private and public, available in the newly-opening market (e.g., London) is quite different from that had been known in the previously trading market (e.g., Tokyo), then inter-regional trading becomes more prevalent (relative to total volumes of transactions) in addition to the large change in prices during the overlapping business hours. Although we have found several interesting facts in the newly available data, there are many tasks left for future research. First, changes in the exchange rate and an activity indicator may be correlated. If the deal is done on one side only, then the exchange rate may move toward that direction. The price impact of deals will be investigated in the future. Second, macroeconomic announcements are often planned during the hour that are before the market opening (say, 8:45 am). However, other markets are open in the case of foreign exchange markets. Additional activities on the day of announcements may be detected not in the market (say, NY) where it is announced but in other markets (say, London).