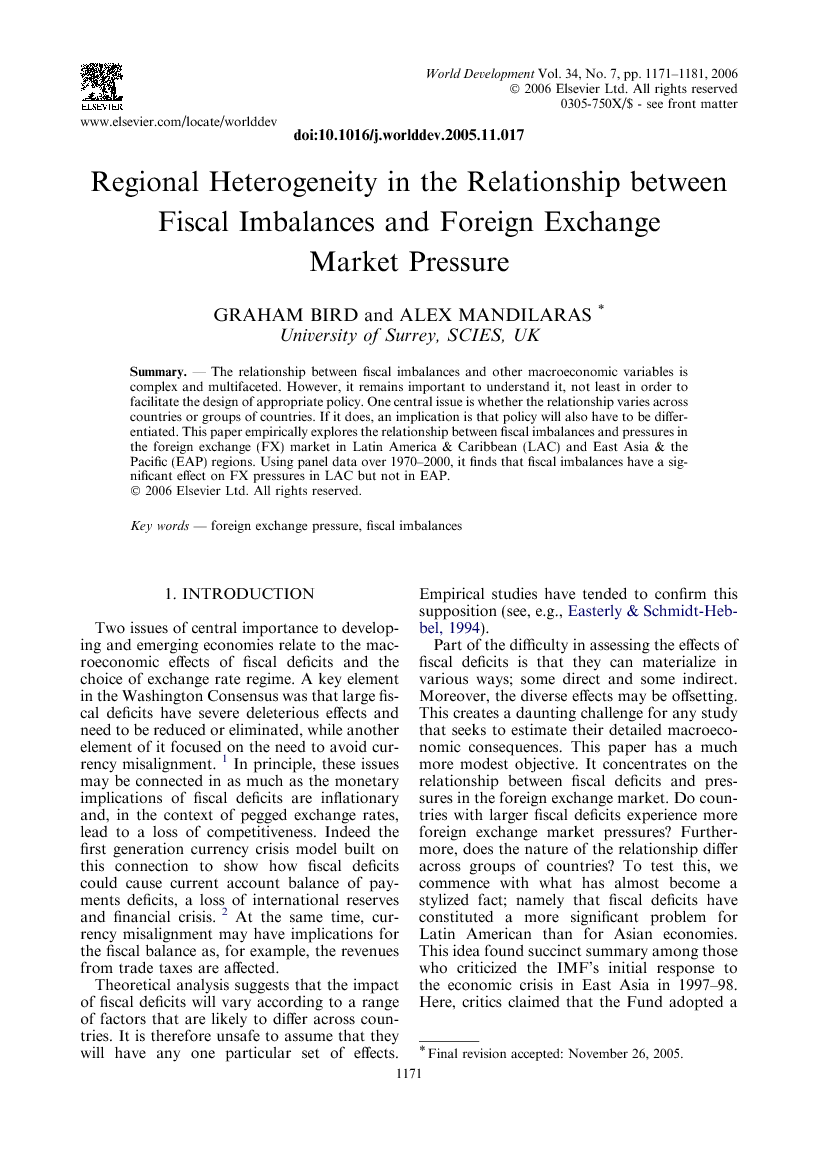 The relationship between fiscal imbalances and other macroeconomic variables is complex and multifaceted. However, it remains important to understand it, not least in order to facilitate the design of appropriate policy. One central issue is whether the relationship varies across countries or groups of countries. If it does, an implication is that policy will also have to be differentiated. This paper empirically explores the relationship between fiscal imbalances and pressures in the foreign exchange (FX) market in Latin America & Caribbean (LAC) and East Asia & the Pacific (EAP) regions. Using panel data over 1970–2000, it finds that fiscal imbalances have a significant effect on FX pressures in LAC but not in EAP.

Two issues of central importance to developing and emerging economies relate to the macroeconomic effects of fiscal deficits and the choice of exchange rate regime. A key element in the Washington Consensus was that large fiscal deficits have severe deleterious effects and need to be reduced or eliminated, while another element of it focused on the need to avoid currency misalignment.1 In principle, these issues may be connected in as much as the monetary implications of fiscal deficits are inflationary and, in the context of pegged exchange rates, lead to a loss of competitiveness. Indeed the first generation currency crisis model built on this connection to show how fiscal deficits could cause current account balance of payments deficits, a loss of international reserves and financial crisis.2 At the same time, currency misalignment may have implications for the fiscal balance as, for example, the revenues from trade taxes are affected. Theoretical analysis suggests that the impact of fiscal deficits will vary according to a range of factors that are likely to differ across countries. It is therefore unsafe to assume that they will have any one particular set of effects. Empirical studies have tended to confirm this supposition (see, e.g., Easterly & Schmidt-Hebbel, 1994). Part of the difficulty in assessing the effects of fiscal deficits is that they can materialize in various ways; some direct and some indirect. Moreover, the diverse effects may be offsetting. This creates a daunting challenge for any study that seeks to estimate their detailed macroeconomic consequences. This paper has a much more modest objective. It concentrates on the relationship between fiscal deficits and pressures in the foreign exchange market. Do countries with larger fiscal deficits experience more foreign exchange market pressures? Furthermore, does the nature of the relationship differ across groups of countries? To test this, we commence with what has almost become a stylized fact; namely that fiscal deficits have constituted a more significant problem for Latin American than for Asian economies. This idea found succinct summary among those who criticized the IMF’s initial response to the economic crisis in East Asia in 1997–98. Here, critics claimed that the Fund adopted a conventional and fiscally contractionary approach to deal with foreign exchange crises that had little to do with fiscal excesses. Is the evidence consistent with the suggestion that Latin America and Asia differ when it comes to the association between fiscal deficits and foreign exchange markets?3 The paper is organized in the following way. Section 2 reviews descriptive statistics relating to fiscal imbalances in Latin America and Asia. These imply that the effects of fiscal deficits may indeed be expected to be different across the two regions. Section 3 explains the methodology used to estimate more formally the relationship between fiscal deficits and foreign exchange market pressures as well as to explore the relevance of the exchange rate regime as classified by Reinhart and Rogoff (2004). Our methodology has a number of advantages over that adopted in much of the existing literature on currency crises, since it allows us to map pressures in the foreign exchange market as a continuous variable. The least squares dummy variables method is used to estimate the panel. The section then goes on to present and interpret our findings. Section 4 briefly examines some of the broader policy implications of our results for the design of fiscal policy in the two regions. Section 5 offers a few concluding remarks and points to some of the limitations of the research reported in the paper.