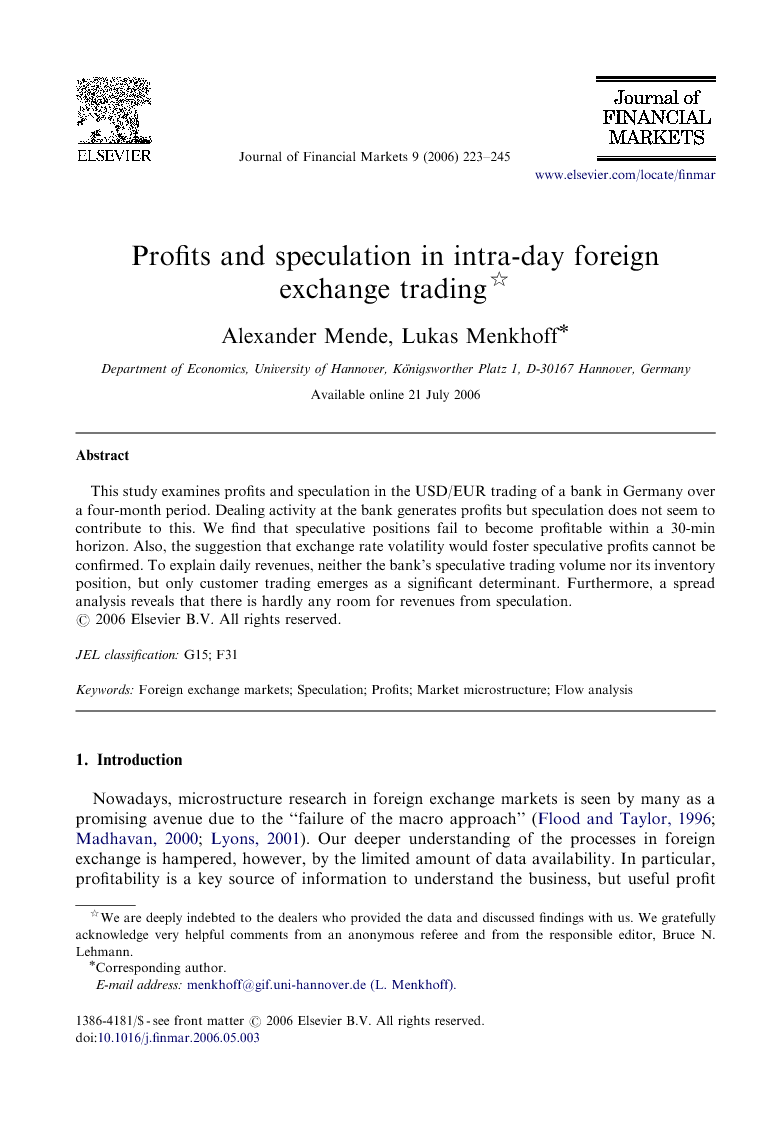 This study examines profits and speculation in the USD/EUR trading of a bank in Germany over a four-month period. Dealing activity at the bank generates profits but speculation does not seem to contribute to this. We find that speculative positions fail to become profitable within a 30-min horizon. Also, the suggestion that exchange rate volatility would foster speculative profits cannot be confirmed. To explain daily revenues, neither the bank's speculative trading volume nor its inventory position, but only customer trading emerges as a significant determinant. Furthermore, a spread analysis reveals that there is hardly any room for revenues from speculation.

This analysis of a bank's trading record has revealed new findings about profits and speculation in foreign exchange trading. First of all, we find that our bank does indeed generate considerable revenues as well as profits from its foreign exchange trading operations. It is difficult to assess from the outside how satisfying the profitability for the overall bank is regarded, but considerable profits are real. The degree of profitability is between the two other cases of large banks documented before us (Lyons, 1998; Yao, 1998). Second, speculative position taking is practiced by the bank but cannot be identified as profitable. This is somewhat surprising, as earlier studies indicated some, although not large, revenues from speculative trading. In detecting revenues from intra-day foreign exchanges speculation we have applied new approaches, making use of the detailed and long sample at hand. An event study approach has been used to track prices when the bank had become engaged in accumulating trades: there is no indication that revenues are earned. In another approach, profits have been related to volatility in the foreign exchange market. We recognize that the bank does speculate more heavily in volatile markets, but it does not seem to be able to take advantage of volatile markets. Extending this regression, several potential profit sources have been put into a multivariate approach, which shows that neither speculation nor interbank trading contribute much to revenues, in fact it is only customer business that is significantly related to profits. Seen from the opposite side, i.e., from spreads identified in customer business, the latter can explain all revenues earned and leaves no room for speculative profits. The common ground for these findings is the competitive environment of one of the largest financial markets in the world, the USD/EUR-market. Fundamental information in this market is generally available to all professional market participants at the same time. It is well known that foreign exchange markets react in a systematic manner to this information (Andersen et al., 2003b) but it is difficult to imagine that a bank would have a systematic advantage in interpreting this information. So, speculation may be based on other kinds of information, such as anticipating central bank intervention (Peiers, 1997), exploiting technical analysis or incoming order flow (as in other financial markets) (see Schultz, 2003). Again, it will be difficult to gain a systematic advantage from these sources, as technical analysis tools are available to competitors, too, and as order flow basically is contemporaneous in relation to exchange rates.12 Obviously, our bank serves its customers competitively, and they do not care too much about a spread of 5 or 10 basis points. However, this small spread is enough for our bank to unload positions, to manage its overall inventory and to cover administrative costs. This successful service makes clear, moreover, that this bank—and possibly other banks as well—is not engaged in stabilizing speculation in Friedman's sense.