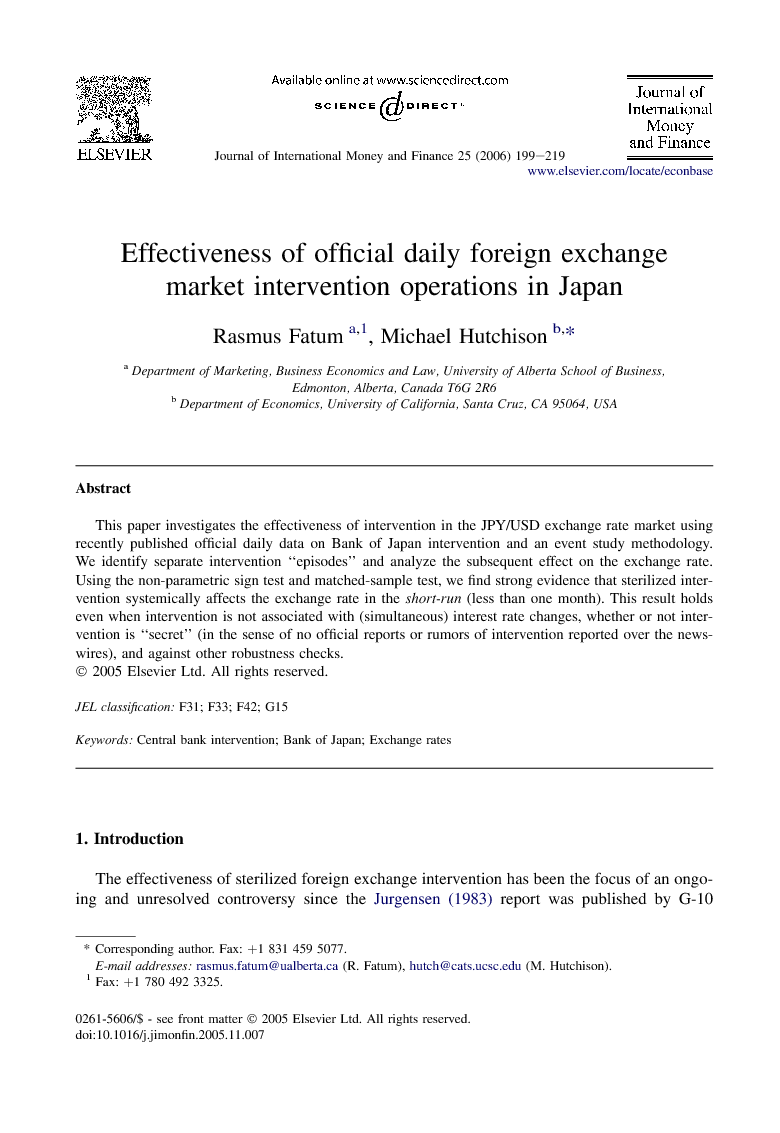 Japanese official intervention in the foreign exchange market is by far the largest magnitude in the world, despite little or no evidence that it is effective in moving exchange rates. Up until recently, however, official data on intervention have not been available for Japan. This paper investigates the effectiveness of intervention using recently published official daily data and an event study methodology. The event study better fits the stochastic properties of intervention and exchange rate data, i.e. intense and sporadic bursts of intervention activity juxtaposed against a yen/dollar rate continuously changing, than standard time-series approaches. Focusing on daily Japanese and US official intervention operations, we identify separate intervention “episodes” and analyze the subsequent effect on the exchange rate. Using the non-parametric sign test and matched-sample test, we find strong evidence that sterilized intervention systemically affects the exchange rate in the short-run. This result holds even when intervention is not associated with (simultaneous) interest rate changes and regardless of whether or not intervention is “secret” (in the sense of no official reports or rumors of intervention reported over the newswires). Controlling for endogenity (when the central bank intervenes for multiple days during a single event) also does not affect the results. Large-scale intervention operations characterized by the simultaneous presence in the foreign exchange market by both the Bank of Japan and the Federal Reserve gave by far the highest likelihood of success. Over 90% of the interventions of this form (large-scale and coordinated) were successful in our data sample. Intervention was also found to be effective even if not accompanied by supporting interest rate changes. This is relevant for present circumstances in Japan where the Bank of Japan is following a zero-interest rate policy and there is no room to lower interest rates further. This result suggests that the Bank of Japan could indeed engineer exchange rate depreciation (thereby counteracting deflation and recession) even though interest rates cannot be moved further downwards. However, only one of the 15 BoJ intervention episodes has been coordinated with the Fed since September 1995 (when Japanese interest rates reached 0.50% and subsequently fell to zero). This may explain why the success rate for intervention events has not been high during this period (only nine successful intervention events for a success rate of 60%). Under these circumstances, it would appear that only persistent, large-scale and coordinated intervention (Bank of Bank and the Federal Reserve) would produce a sustained movement in the exchange rate. In interpreting the results two caveats should be noted. First, we only find support for short-run effectiveness of intervention. The baseline results found intervention events to be effective over a period of 2–5 days, and an extension of the framework showed effects lasting for up to two weeks. This is not direct evidence against longer-term effects, but reflects a limitation of the event study methodology. Second, the event study methodology does not allow identification of the particular channel through which intervention works. Our findings are consistent, however, with recent literature interpreting intervention as a means to “signal” not only future policy but also the central bank's views on the fundamental/equilibrium value of the exchange rate.