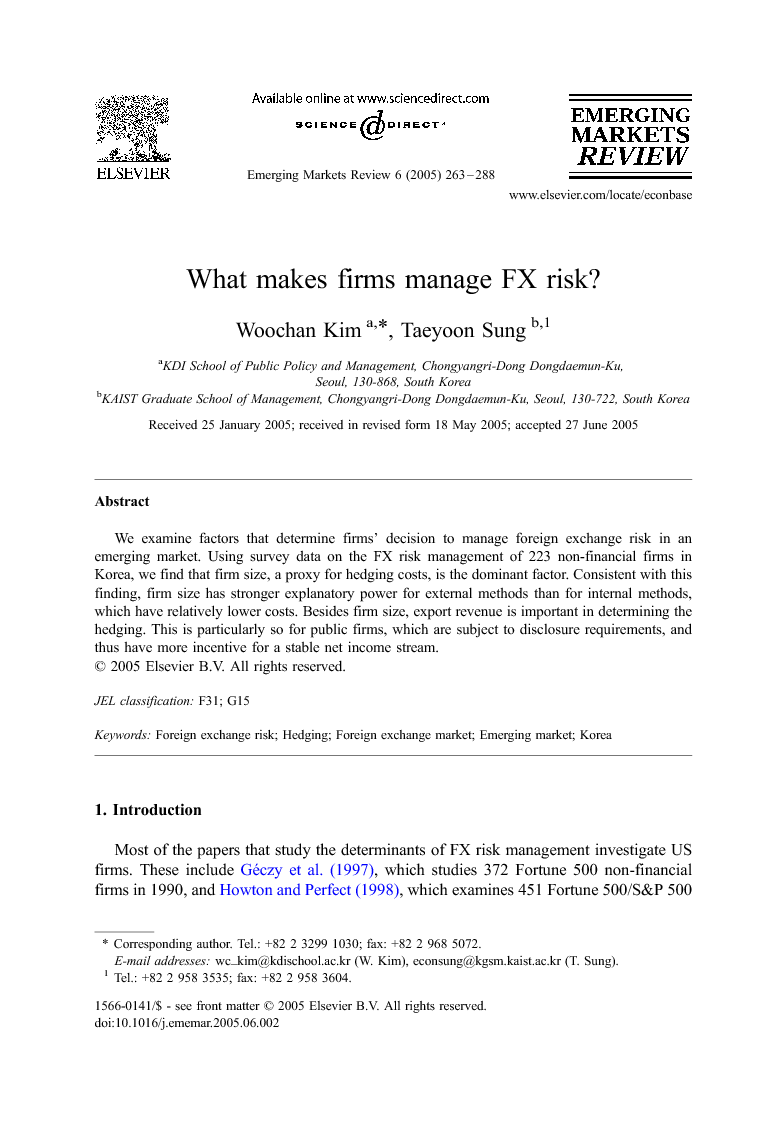 We examine factors that determine firms' decision to manage foreign exchange risk in an emerging market. Using survey data on the FX risk management of 223 non-financial firms in Korea, we find that firm size, a proxy for hedging costs, is the dominant factor. Consistent with this finding, firm size has stronger explanatory power for external methods than for internal methods, which have relatively lower costs. Besides firm size, export revenue is important in determining the hedging. This is particularly so for public firms, which are subject to disclosure requirements, and thus have more incentive for a stable net income stream.

Most of the papers that study the determinants of FX risk management investigate US firms. These include Géczy et al. (1997), which studies 372 Fortune 500 non-financial firms in 1990, and Howton and Perfect (1998), which examines 451 Fortune 500/S&P 500 non-financial firms in 1994.2 There are papers investigating firms outside the US, but they still cover firms from mature economies.3 One exception is Marshall (2000), which includes Asia Pacific multinational companies in his sample. Nevertheless, the paper studies only a limited number of emerging-market firms and provides only summary statistics with no sophisticated analyses.4 This paper is motivated to fill the gap in the literature. We focus on firms from an emerging economy. Specifically, we study 223 Korean firms in 2002, relying on survey data compiled by the Korean Financial Supervisory Service (hereafter “FSS”).5 There are a number of reasons why firms in emerging economies might behave differently from those in mature economies. One possible source of heterogeneity could be the exchange rate regime the country is subject to. If the country is under a regime where the exchange rate with its major trading partner is kept stable through active FX market intervention, there will not be much of a need to hedge, and thus FX risk management may not be influenced by the factors identified from theory. Since there is not much of a “benefit” to hedge, the “cost” of hedging can become a dominant factor. Another source of asymmetry could be the underdeveloped FX derivatives market. Instead of using costly derivatives, firms in such countries may rely more on internal hedging methods, such as leading and lagging or pricing policy. Experiencing a currency crisis can also be a source of difference. For firms from emerging economies that have experienced a currency crisis, such as Korea, Thailand, and Indonesia, a sharp depreciation in the local currency may be a source of greater concern than its sudden appreciation. Thus, the fraction of foreign currency-denominated debt might be a more important factor than the proportion of export revenues in explaining the firm's decision to hedge. Our main empirical results can be summarized as follows. First, as expected, we find that the cost of hedging is the dominant determinant in a firm's decision to hedge foreign exchange risk. The coefficient on firm size, our proxy for the cost of hedging or economies of scale, is statistically significant and economically meaningful regardless of the regression specification we use. One possible explanation for this is the stable won–dollar exchange rate maintained since the currency crisis of 1997/98, which discouraged firms from hedging despite their large foreign currency exposures.6 Only large firms that could afford the cost were likely to have engaged in hedging. Second, we find that firm size plays a weaker role when explaining the usage of internal hedging instruments. The coefficient on firm size is statistically insignificant when regressing for leading and lagging, netting, and pricing. On the other hand, size becomes an important factor when explaining the usage of external hedging instruments, such as forwards, money market transactions, currency swaps, and currency options. This result is consistent with our earlier conjecture that small firms cannot afford the cost of using derivatives when the derivatives market is underdeveloped. Third, we do not find that foreign currency-denominated debts play a major role in explaining a firm's decision to hedge foreign exchange risk, but rather find that export revenue matters more. This is not consistent with our conjecture that firms from crisis-hit countries would be more concerned about a sudden depreciation of the local currency and would thus tend to hedge their exposure from foreign currency debts. In explaining this, it may be helpful to examine the movement of the won–dollar exchange rates since the crisis. The slow and steady appreciation of the Korean won over an extended period of time might have led Korean firms to expect that the Korean won would continue to appreciate. This might have led the firms to sell forward their dollar revenues, but not to swap their dollar-denominated interest payments. This is similar to the behavior Harvey and Roper (1999) described about Asian corporate managers during the pre-crisis period. They document that Asian corporate managers issued foreign currency debt in the face of lower corporate performance betting that the exchange rates would remain fixed for an indefinite period of time. Fourth, we find that the explanatory power of export revenue, as a determinant of foreign exchange risk management, is stronger in public firms.7 One possible reason could be that listed firms are subject to various disclosure requirements, which induce these firms to hedge foreign exchange risk so as to generate a stable stream of net income. Although this paper uses the Korean data for its empirical testing and spare more space on the Korean FX market in emerging markets, we believe our main empirical findings are applicable to other crisis-hit Asian economies, namely Indonesia, Malaysia, Philippines, and Thailand. This conjecture is based on the fact that their FX markets share a number of commonalities with the Korean market, which we give detailed accounts in the next section. This paper is organized as follows. Section 2 gives a brief overview of the Korean foreign exchange market. Section 3 describes the data. Section 4 discusses hypotheses and methodologies. Empirical results are discussed in Section 5. Section 6 concludes.

During the 1990s, many countries shifted their exchange rate regime to a floating system, and Korea was no exception. According to Bubula and Ötker-Robe (2002), the percentage of IMF members with a pegged exchange rate regime dropped from 65.4% in 1990, to 44.5% in 1998. But the picture looks different when judged de facto. According to the same study, the percentage of IMF members with a de facto pegged regime was 79.9% in 1990, and this figure dropped only to 64.0% in 1998. McKinnon and Schnabl (2004) is another study that points out that many crisis-hit countries during the Asian currency crisis returned to a de facto dollar peg during the post-crisis period. We believe Korea is no exception. By heavily intervening in the foreign exchange market, the exchange rate against the dollar stabilized within a band around the 1200 level, despite consecutive years of balance of payments surpluses. Moreover, the foreign exchange reserves that accumulated in the process reached a level that can more than credibly deter any speculative attack. We believe this external environment had a great influence over Korean firms' decision to manage their foreign exchange risk. With the government effectively maintaining the de facto peg, individual firms were deprived of the incentive to manage foreign exchange risk exposures at their own expenses. Our empirical finding supports this story. That is, with little benefit from hedging, consideration of cost becomes the dominant factor in making risk management decisions. Among all the factors influencing foreign exchange risk management, we find that firm size, which is a proxy for hedging cost or economies of scale, is the single most important factor. McKinnon and Schnabl (2004), however, do point out that the reemergence of a de factor dollar peg is rational. They make two main points: first, most of the Asian countries, including Korea, still invoice their trade in US dollars.26 Second, with the absence of domestic fixed income market at different maturities, the active forward market is also absent. So it is rational for the government to hedge on behalf of the firms by keeping the won stable against the dollar. But we believe this can trigger a vicious cycle. The stable exchange rate against the U.S. dollar will lead firms to continue their trade invoicing in dollars. The stable currency will also create a moral hazard problem described in Harvey and Roper (1999) that leads banks and firms to increase their unhedged foreign exchange exposure, which further makes it impossible to let the exchange rate float freely. Furthermore, betting on a stable exchange rate or a gradual appreciation against the U.S. dollar in a controlled manner seems naïve since continuous FX intervention may not be sustainable in the long-run. As well documented by Roubini and Setser (2005), the fiscal carry costs of sterilized intervention by major Asian central banks, namely Japan, China, Taiwan and Korea, are high and increasing. That is, they earn about 2% on their dollar reserves and pay a higher interest rate on the liabilities issued to sterilize. Eventual deterioration of the central banks' balance sheet will limit the extent of FX intervention and the appetite for U.S. Treasury securities, consequently resulting in a depreciation of the U.S. dollar. This will also inflict significant capital losses in terms of local currencies to the Asian central banks.