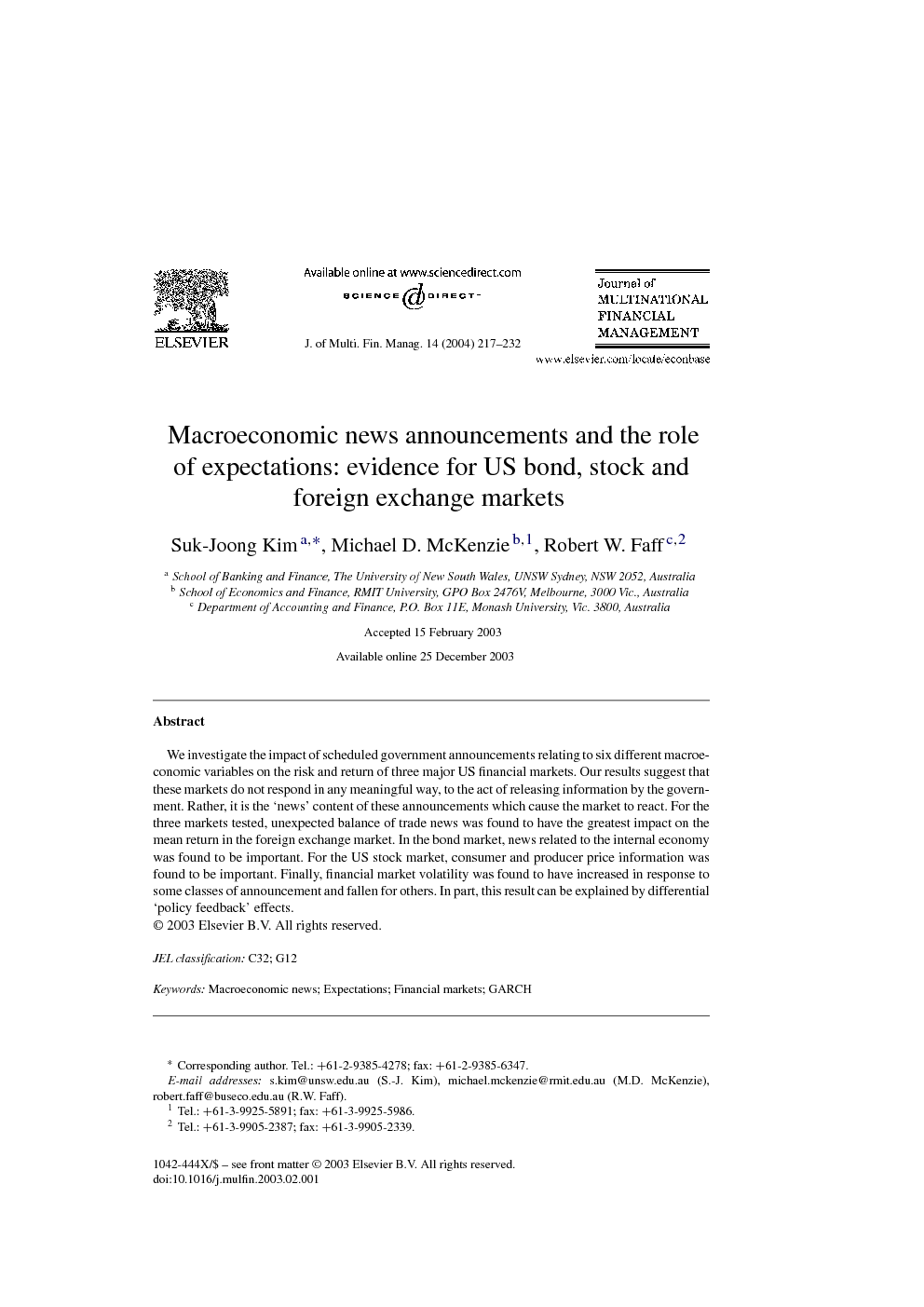 We investigate the impact of scheduled government announcements relating to six different macroeconomic variables on the risk and return of three major US financial markets. Our results suggest that these markets do not respond in any meaningful way, to the act of releasing information by the government. Rather, it is the ‘news’ content of these announcements which cause the market to react. For the three markets tested, unexpected balance of trade news was found to have the greatest impact on the mean return in the foreign exchange market. In the bond market, news related to the internal economy was found to be important. For the US stock market, consumer and producer price information was found to be important. Finally, financial market volatility was found to have increased in response to some classes of announcement and fallen for others. In part, this result can be explained by differential ‘policy feedback’ effects.

There now exists an extensive literature aimed at assessing the market impact of ‘scheduled’ news announcements. In this context, three of the most commonly studied financial markets are the stock market (see inter alia Pearce and Roley, 1983, Pearce and Roley, 1985, French and Roll, 1986, McQueen and Roley, 1993 and Sun and Tong, 2000), the foreign exchange rate market (see inter alia Ito and Roley, 1987, Hardouvelis, 1988, Ederington and Lee, 1994, DeGennaro and Shreives, 1997 and Almeida et al., 1998), and the bond market (see inter alia Becker et al., 1996, Jones et al., 1998 and Fleming and Remolona, 1999a). For each of these markets, the impact of macroeconomic news announcements on returns and volatility is most frequently examined, although other market trading dimensions such as volume and bid/ask spreads have also been tested. Much of the work in this field has considered the announcement event only—without regard for the actual information revealed to the market by that announcement (see Stone, 1990, Fleming and Remolona, 1997, Fleming and Remolona, 1999b, Jones et al., 1998 and Andersen and Bollerslev, 1998). One key feature of scheduled news arrivals however, is that the market (and those that participate in it) formulate expectations regarding the upcoming scheduled information release. To the extent that traders take positions based on their expectations of future events, the anticipated estimate for the upcoming scheduled news announcement will be important in determining the reaction of the market. Thus, it may not be the act of releasing information to the market which is important, nor the (gross) information embodied in the estimate itself. Rather, it is the extent to which the actual announcement differs from the expected which determines the response of the market to the new information. A number of studies have considered the impact of the unexpected component of scheduled news released on individual markets (see Singh, 1993, Singh, 1995, Kim, 1998, Kim, 1999, Li and Hu, 1998 and Balduzzi et al., 1997). More recently, a literature is beginning to emerge which considers the impact of such macroeconomic announcements across financial markets rather than for individual markets in isolation. Given such scheduled news releases typically relate to macroeconomic indicators whose impact is economy wide, such an approach is of great interest. For example, Aggarwal and Schirm (1998) document an asymmetric impact of unexpected trade balance announcements on bond, exchange rate and equity mean returns. The purpose of this paper is to consolidate these advances in the literature by conducting an intensive examination of the impact of six of the most important macroeconomic news announcements on the mean and volatility of returns in US equity, bond and foreign exchange markets. Not only will the impact of the announcement itself be considered, but also the role of expectations is to be examined. Thus, the key contributions of this paper are three-fold. First, the paper provides evidence on the response of financial markets to macroeconomic news announcements. The focus on US markets is justified given its dominant position in the global arena. Second, it aims to identify the role of market expectations in determining the market’s response to macroeconomic announcements. The testing of both the release of information to the market as well as the news content of that information will provide important insights into what drives market responses to the release of macroeconomic news. Third, in contrast to the piecemeal approach which has typically been adopted previously in the literature, this paper will consider a wide range of announcements across a number of financial markets. As such, comparative conclusions will be possible that allow greater insight into the differential dynamics of various markets and into the complex way in which different financial markets interact. The major findings of our analysis can be summarized as follows. First, we found that financial markets do not seem to respond in any meaningful way, to the very act of releasing information by the government. Rather, it is the ‘news’ content of these announcements which cause the market to react. For the three markets tested, unexpected balance of trade news was found to have the greatest impact on the mean return in the foreign exchange market. In the bond market, news related to the internal economy was found to be important. For the US stock market, consumer and producer price information was found to be important. Finally, contrary to previous studies, financial market volatility was found to have significantly increased in response to some classes of announcement and fallen for others. In part, this result can be explained by differential ‘policy feedback’ effects across the various macroeconomic indicators. The remainder of this paper is organized as follows. In Section 2, we provide general background to US macroeconomic announcements and market expectations. Section 3 outlines the empirical framework, while results are presented in Section 4. Finally, in Section 5 we present our conclusions.

General macroeconomic information is important to investors as it has an obvious and fundamental role to play in influencing the path of asset prices. This paper considers the impact of the release of news in six of the most important macroeconomic indicators on US stock, bond and foreign exchange markets. Unlike previous studies in this area which have included only a few indicators and typically one market, the current paper takes a more holistic approach to the task. Further, an attempt is made to assess the level of information released to the market by incorporating market expectations into the analysis. The relationship between announcement news and market volatility, as well as the news effects on the market returns is also investigated. The quantitative results presented in this paper suggest that it is not the act of releasing macroeconomic information which the market considers to be important, but rather the ‘news’ component of each release—i.e., the difference between the markets expectation and the actual figure. Balance of trade news was found to have the greatest impact on the foreign exchange market. In the bond market, news related to the internal economy was generally found to be important while for the US stock market, consumer and producer price information was significant. This latter result is most interesting given that economic conditions have an important role to play in determining a company’s prospects for future growth. The fact that little evidence could be found of returns responding to non-price news about the state of the economy may indicate that trading in these markets is dominated by short term (liquidity) traders with little interest in a company’s real value. One interesting but largely unexplained aspect of the current research was that the arrival of positively signed and negatively signed news did not necessarily increase volatility as is often hypothesized. For some markets, evidence was found of a volatility dampening effect on the arrival of certain types of news. Future research in this field may consider the cross-country impact of macroeconomic announcements. Events in the US economy, for example, are frequently taken as a leading indicator of future events in other economies. As such it is possible that US macroeconomic announcements may impact on other economies. This issue is currently the subject of ongoing research.