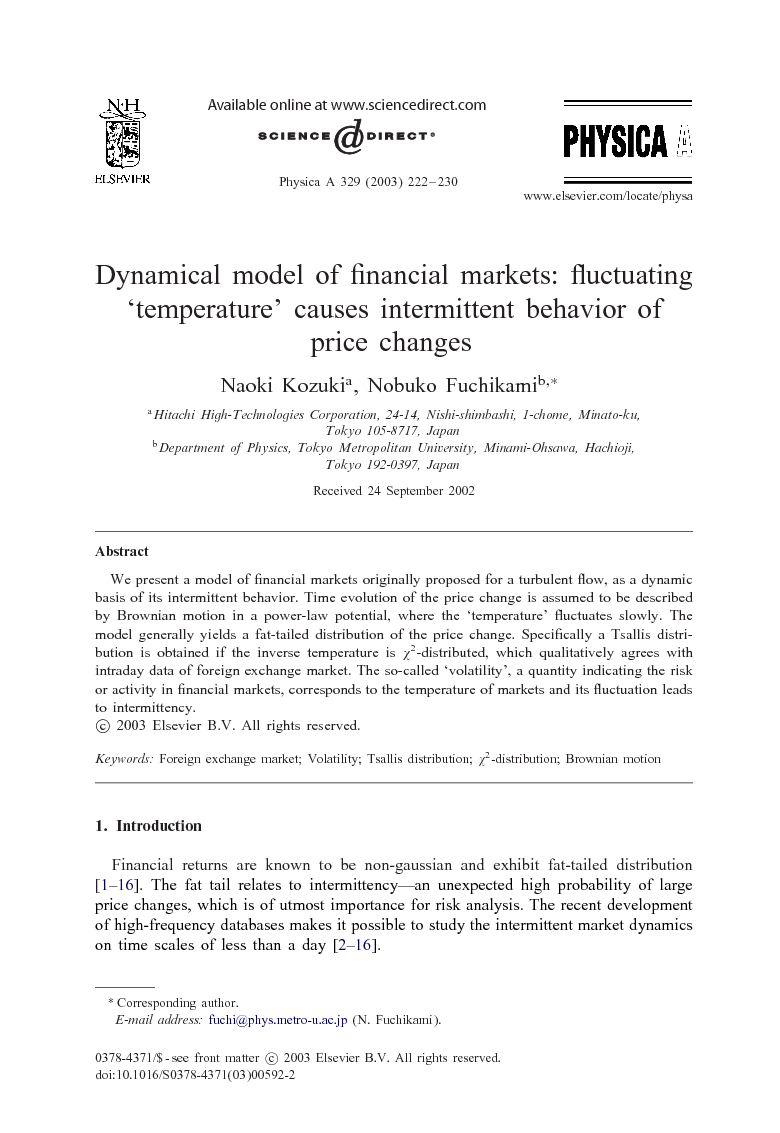 We present a model of financial markets originally proposed for a turbulent flow, as a dynamic basis of its intermittent behavior. Time evolution of the price change is assumed to be described by Brownian motion in a power-law potential, where the ‘temperature’ fluctuates slowly. The model generally yields a fat-tailed distribution of the price change. Specifically a Tsallis distribution is obtained if the inverse temperature is χ2-distributed, which qualitatively agrees with intraday data of foreign exchange market. The so-called ‘volatility’, a quantity indicating the risk or activity in financial markets, corresponds to the temperature of markets and its fluctuation leads to intermittency.

Financial returns are known to be non-gaussian and exhibit fat-tailed distribution [1], [2], [3], [4], [5], [6], [7], [8], [9], [10], [11], [12], [13], [14], [15] and [16]. The fat tail relates to intermittency—an unexpected high probability of large price changes, which is of utmost importance for risk analysis. The recent development of high-frequency databases makes it possible to study the intermittent market dynamics on time scales of less than a day [2], [3], [4], [5], [6], [7], [8], [9], [10], [11], [12], [13], [14], [15] and [16]. Using foreign exchange (FX) intraday data, Müller et al. [13] showed that there is a net flow of information from long to short timescales, i.e., the behavior of long-term traders influences the behavior of short-term traders. Motivated by this hierarchical structure, Ghashghaie et al. [4] have discussed analogies between the market dynamics and hydrodynamic turbulence [17] and [18], and claimed that the information cascade in time hierarchy exists in an FX market, which corresponds to the energy cascade in space hierarchy in a three-dimensional turbulent flow. These studies have stimulated further investigations on similarities and differences in statistical properties of the fluctuations in the economic data and turbulence [5], [6], [7], [8], [9], [10] and [11]. Differences have also emerged. Mantegra and Stanley [5] and [6] and Arnéodo et al. [7] pointed out that the time evolution, or equivalently the power spectrum is different for the price difference (nearly white spectrum) and the velocity difference (f1/3 spectrum, i.e., −5/3-law for the spectrum of the velocity). Moreover, from a parallel analysis of the price change data with time delay and the velocity difference data with time delay (equivalent to the velocity difference data with spatial separation under the Taylor hypothesis [17]), it was shown that the time evolution of the second moment and the shape of the probability density function (PDF), i.e., the deviation from gaussian PDF are different in these two stochastic processes [6]. On the other hand, non-gaussian character in fully developed turbulence [17] has been linked with the nonextensive statistical physics [19], [20], [21], [22], [23] and [24]. As dynamical foundation of nonextensive statistics, Beck recently proposed a new model describing hydrodynamic turbulence [22] and [23]. The velocity difference Δv of two points in a turbulent flow with the spatial separation Δr is described by Brownian motion (an overdamped Langevin equation [25]) in a power-law potential. Assuming a χ2-distribution for the inverse temperature, he obtained a Tsallis distribution [19] for Δv. However, if we take into account the fact that the price change [5], [6] and [7] is almost uncorrelated with respect to the time behavior, the picture by means of the Brownian motion seems to be more appropriate for the market data rather than turbulence. Moreover, the description by the Langevin equation is able to relate the PDF of the price change to that of the volatility, a quantity known as a measure of the risk in the market. Thus we apply the model to FX market dynamics by employing the correspondence by Ghashghaie et al. [4].