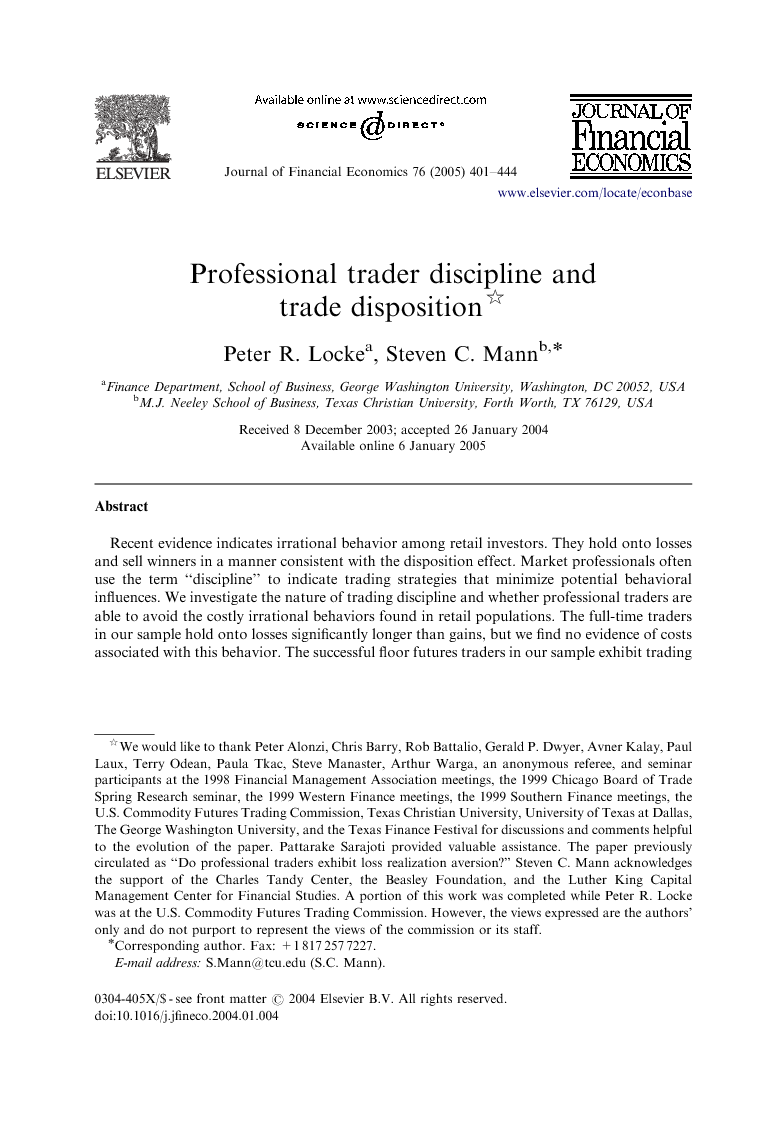 Recent evidence indicates irrational behavior among retail investors. They hold onto losses and sell winners in a manner consistent with the disposition effect. Market professionals often use the term “discipline” to indicate trading strategies that minimize potential behavioral influences. We investigate the nature of trading discipline and whether professional traders are able to avoid the costly irrational behaviors found in retail populations. The full-time traders in our sample hold onto losses significantly longer than gains, but we find no evidence of costs associated with this behavior. The successful floor futures traders in our sample exhibit trading behavior characterized as rational and disciplined. Moreover, measures of relative trading discipline have predictive power for subsequent trading success.

We examine the discipline of professional traders and their tendency to exhibit the disposition effect. By discipline we mean the adherence to trade exit strategies, which we measure by either the general speed of trading or by the avoidance of riding losses: holding onto positions with large loss exposure (negative mark-to-markets). We measure the tendency to hold onto large losses for each trader as the median of the trader’s maximum potential (mark-to-market) loss per contract for trades held over ten minutes. In either case, trades will be offset more rapidly by disciplined traders, as suggested by Silber (1984). We find that measures of relative discipline based on trading in the first six months of 1995 are related to trader success in the subsequent six months. Traders offsetting losses more quickly are more likely to be successful in the future, but speed in closing gains is equally useful as a success predictor. Thus, aversion to realizing losses is not driving the results. However, we also find that traders who hold onto relatively large losing trades for longer periods (more than ten minutes) are subsequently less likely to be successful. Using the natural zero benchmark for establishing gains and losses, we find that professional futures floor traders exhibit asymmetric trading behavior with respect to gains and losses. The evidence is strong that these traders hold losing trades longer than gains. However, we are unable to discover any contemporaneous measurable costs associated with this apparent aversion to realizing losses. Thus we conclude that no evidence exists of a costly disposition effect among this group of traders. Absent evidence of costs associated with holding losses longer than gains, we seek other explanations, following the suggestion in Fama (1998) that evidence of behavioral problems is often consistent with rational behavior. First, we find that the evidence that traders hold losses longer than gains is sensitive to the benchmark choice. While the zero benchmark is natural, and evidence using the zero benchmark indicates that traders hold losses longer than gains, the strength of the evidence dissipates using expected income benchmarks. Regardless of the benchmark, we find no evidence of contemporaneous costs associated with holding losses longer. Second, we find no evidence that success is contemporaneously related to a tendency to hold losses longer than gains. The effect appears to be prevalent across trader success groups. We conclude that no evidence is available of a costly disposition effect among professional futures traders, but that a relative lack of discipline in realizing both gains and losses promptly is harmful to the probability of success.