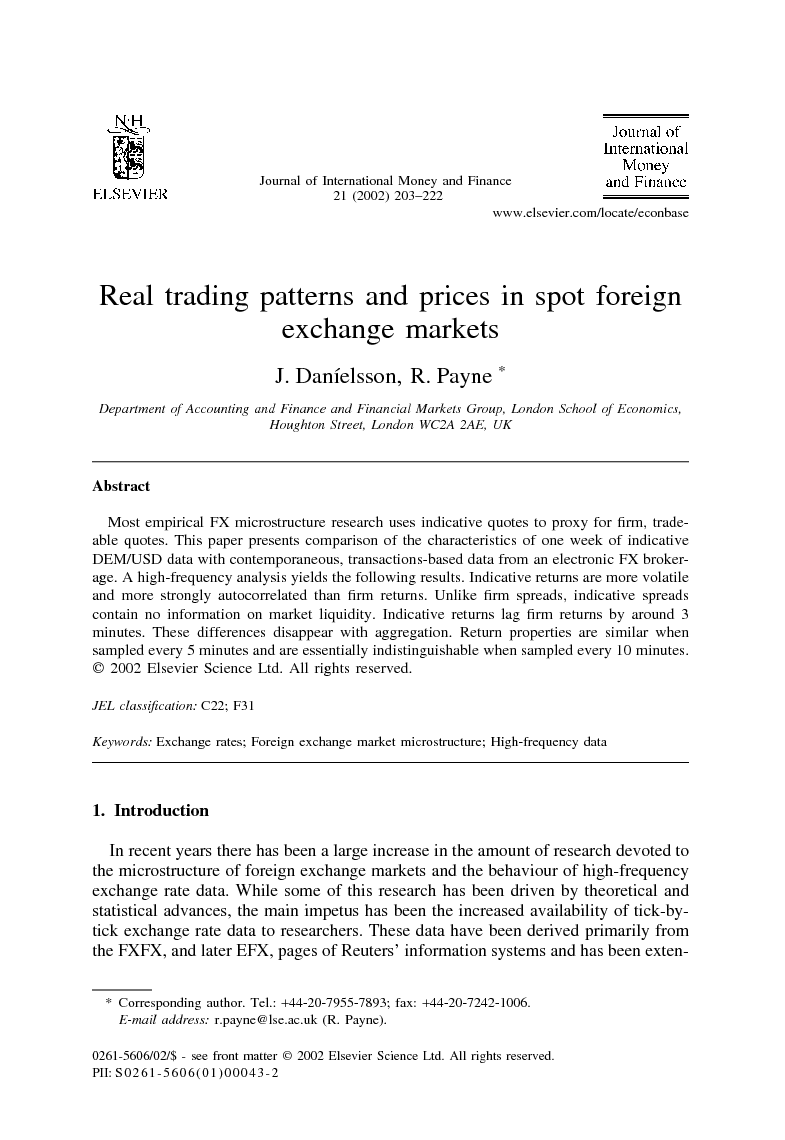 Most empirical FX microstructure research uses indicative quotes to proxy for firm, tradeable quotes. This paper presents comparison of the characteristics of one week of indicative DEM/USD data with contemporaneous, transactions-based data from an electronic FX brokerage. A high-frequency analysis yields the following results. Indicative returns are more volatile and more strongly autocorrelated than firm returns. Unlike firm spreads, indicative spreads contain no information on market liquidity. Indicative returns lag firm returns by around 3 minutes. These differences disappear with aggregation. Return properties are similar when sampled every 5 minutes and are essentially indistinguishable when sampled every 10 minutes.

In recent years there has been a large increase in the amount of research devoted to the microstructure of foreign exchange markets and the behaviour of high-frequency exchange rate data. While some of this research has been driven by theoretical and statistical advances, the main impetus has been the increased availability of tick-by-tick exchange rate data to researchers. These data have been derived primarily from the FXFX, and later EFX, pages of Reuters' information systems and has been extensively employed in empirical studies. For example, FXFX midquotes are widely used as proxies for transaction prices in analysis of intra-day exchange rate volatility (Baillie and Bollerslev, 1991, Dacorogna et al., 1993, Andersen and Bollerslev, 1997 and Payne, 1996), triangular arbitrage relationships (de Jong et al., 1998), and intra-day technical trading rule performance (Curcio et al., 1997). FXFX spreads have been used as measures of FX market liquidity in studies such as Bollerslev and Melvin (1994) and Hartmann (1999). Finally, FXFX quote frequency is used as a proxy for traded currency volumes in Bollerslev and Domowitz (1993) and Melvin and Yin (2000). EFX data, however, have a number of shortcomings. First, and most importantly from a microstructure perspective, they contain no measure of traded currency volumes. This renders many interesting microstructure hypotheses untestable. Second, the bid and ask quotes derived from EFX screens are indicative rather than firm. This means that such quotes are not binding commitments to trade from the originator and hence they may not be accurate measures of tradeable exchange rates. Furthermore, while the EFX system gives a timestamp for the entry of a quote pair, no such timing is given for the exit of quotes. Hence there is no information on the effective lifetime of EFX quotes. Finally, each EFX bid and ask quote pair is input by a single dealer. As such, these quotes are likely to reflect dealer-specific characteristics (e.g. inventories or beliefs) and may be a poor representation of ‘market quotes’. These shortcomings raise concerns about the validity of EFX data as a proxy for both transaction prices and firm quotes. Below, we present an empirical comparison of the features of data derived from both indicative EFX quotes and firm data drawn from Reuters D2000-2 (an electronic FX broking system), using tick-by-tick observations for the same five days. As such, this work builds upon, extends and clarifies results in Goodhart et al. (1996), who compare the statistical features of EFX data and data from D2000-2. However, their analysis is subject to a number of limitations. First, their data covered only a single day. Hence, for example, they could not examine recurrent intra-daily patterns in the data or provide accurate information on how the statistical features of the data varied with time of day. The second main limitation of their study is that their D2000-2 data are not timestamped. Hence, in order to construct approximately contemporaneous data sets, they match them by maximizing the correlation between EFX and D2000-2 midquotes. Clearly, this implies that Goodhart et al. (1996) cannot properly examine the lead–lag relationships between EFX and D2000-2 returns and volatility measures. Our analysis is based on a newly available transactions-based data set on the DEM/USD drawn from Reuters D2000-2.1 The data covers the week from October 6 to October 10, 1997, and, in addition, we have EFX data from the same week. We examine the following statistical features of series drawn from the two data sources; 1. Intra-day activity patterns. 2. Sample moments and dependence measures for returns. 3. Cross-correlations between firm and indicative returns. 4. The information content of each quotation series. 5. Volatility spillovers from D2000-2 to EFX returns and vice versa. 6. The manner in which the relationship between the data series depends on sampling frequency. Our results indicate that EFX quotes are a poor proxy for firm quotes at very high sampling frequencies (20 seconds). The EFX midquote is far more volatile and more strongly autocorrelated than its D2000-2 counterpart. Further, EFX spreads contain little or no information on the pace of the market. D2000-2 midquote returns lead those on EFX by 2 to 3 minutes and the proportion of all information entering the exchange rate via the D2000-2 price is above 90% (during normal trading hours). We surmise that EFX quotes tend to be used primarily as an indication of willingness to trade on a certain side of the market. Generally, an initiating trader wishes to either buy or sell, but not both. To signal his/her intentions, a standard, large spread is used to make only one side of the quote a keen price. Then, as the quotes contain the name and location of the originating institution, this trader can be easily contacted by potential counterparties. Such quote-setting behaviour will imply precisely the statistical data features indicated above. As one might expect, as sampling frequency is reduced, many of the discrepancies between the indicative and firm data disappear (with the exception of the differences in spread behaviour). We find that at levels of aggregation of 5 minutes and above, EFX returns are a fairly good proxy for firm returns. At a sampling frequency of 10 minutes, the two return series are extremely similar. The rest of the paper is set out as follows. The next section contains a brief description of the nature of the spot FX markets and how the D2000-2 and EFX systems fit into the market structure. 2.1.1 and 2.1.2 give an overview of the two data sources and the structure of each data set. Section 2.2.1 provides our analysis of the activity patterns on EFX and D2000-2, mainly through a set of graphics. In Section 2.2.2 we describe the basic statistical nature of the two sets of midquote returns. Section 3 contains an analysis of the information content of each of the two return series and our bivariate GARCH results, and our analysis of the effects of temporal aggregation on return characteristics is contained in Section 4. Section 5 provides conclusions and presents ideas for further work.

In recent years, a large body of literature on empirical FX microstructure has emerged. Most of this work has been conducted using data derived from indicative EFX quotes because firm quotes and/or transaction prices have been unavailable at sufficiently high frequencies. Researchers have, however, remained skeptical of the accuracy of EFX quotes. Perhaps for this reason, EFX data have generally been employed at relatively coarse sampling frequencies, e.g. 5 or 10 minutes. Our analysis vindicates this practice. Based on a 20-second data sampling we derive the following results: 1. EFX midquote returns are excessively volatile when compared to returns in the midquote derived from the best D2000-2 limit buy and sell prices. 2. While EFX returns are strongly negatively autocorrelated, D2000-2 returns have much lower negative autocorrelation. 3. Bid–ask spreads in D2000-2 data exhibit the expected intra-day U pattern, while EFX spreads do not. 4. Quote frequency on the EFX system and D2000-2 transaction frequency are fairly strongly positively correlated. 5. News is first incorporated into D2000-2 quotes, and impacts EFX quotes over the next 2 to 3 minutes. This implies that D2000-2 returns forecast EFX returns. 6. On average, over 90% of price relevant information enters the D2000-2 midquote first, and from there is impounded in the EFX midquote. 7. D2000-2 volatility impacts EFX volatility. The converse is not true. These results can be explained by the following model of trader behavior. Most agents submitting a quote to EFX only really wish to deal on one side of the market, the sell side for example, and hence place an approximately competitive ask quote. To complete the quote a standard spread is subtracted to get the bid. This implies that spreads contain little or no information, quote returns will be excessively volatile and will display inflated first-order autocorrelations. By this hypothesis, traders consider the EFX screens as a forum for advertising, signaling willingness to buy/sell, while trades are conducted directly, possibly at different prices. Our final results will be comforting to those that have used EFX return data with more coarse sampling frequencies. Measurement errors in EFX disappear with aggregation. Most anomalies in EFX returns have disappeared at a 5-minute sampling frequency and all are insignificant at a 10-minute sampling.