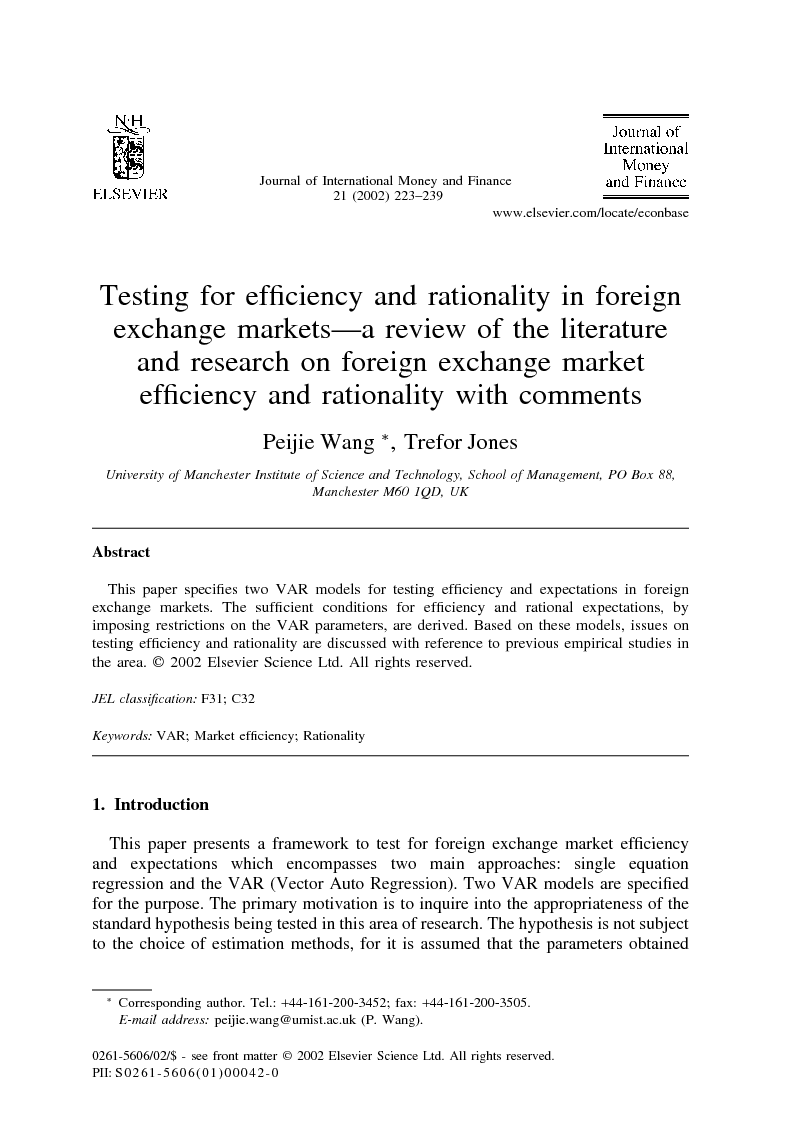 This paper presents a framework to test for foreign exchange market efficiency and expectations which encompasses two main approaches: single equation regression and the VAR (Vector Auto Regression). Two VAR models are specified for the purpose. The primary motivation is to inquire into the appropriateness of the standard hypothesis being tested in this area of research. The hypothesis is not subject to the choice of estimation methods, for it is assumed that the parameters obtained are, at least unbiased and, may be efficient, in statistical terms. Appropriateness means that even if one has obtained consistent and efficient estimators for the parameters, whether these parameters will provide appropriate guidelines for accepting or rejecting the hypothesis regarding market efficiency and rational expectations. This concerns us, because the majority of the studies have rejected the hypothesis of market efficiency and rationality to such an extent that the parameters have not only the wrong magnitudes but also the wrong signs, which do not appear to be justified by theory or practice in foreign exchange markets. Therefore, it is important to ask whether such studies are testing the right things; and whether too much effort has been invested to obtain good estimators for the parameters which do not really rule anything in or rule anything out. This paper is organized as follows. Section 2 presents the specifications of single equation regression and the VAR model, which are commonly used in hypothesis testing. In Section 3, a minor amendment is made to the basic VAR, to develop model A, which can be reduced to one kind of single equation regression specifications and the basic VAR. We then propose a second model, called model B, which can be reduced to any kind of single equation regression specifications, and would be the same as model A under certain circumstances. Some special cases of both models A and B are illustrated in Section 4 to demonstrate that the standard hypothesis being tested is not appropriately laid out. Discussions of the “news” model as a solution to the problem and the explanatory power of “news” is explored in Section 5. Section 6 provides a summary.

In this paper we have specified two VAR models for testing efficiency and expectations in foreign exchange markets. By incorporating a forward premium, these two models encompass the two main approaches used in empirical investigations: single equation regression and the VAR. The forward premium provides vital information embedded only in the level variables to test the sufficient conditions while retaining stationarity in the statistical equations. This would solve the dilemma of either using the variables in levels which violate the requirement for estimation in the VAR model; or using the variables in differences with the sufficient conditions being untested due to information loss. This study has the following results and conclusions. First, the sufficient conditions can only be met with the exchange rate variables in levels being included. The basic VAR, as used in the previous studies, is only able to test whether the necessary conditions hold; and as such, efficiency and rationality are not guaranteed, although a rejection of the hypothesis will be enough to reach a verdict. Second, the single equation regression method ignores exchange rate dynamics and could distort the true parameters even if the estimated parameters are statistically sound, whether overlapping data or non-overlapping data are used in research. In the former, where the sampling period is thinner than the forward contract period, although serial correlation in the residual is recognized and measures have been taken to achieve an unbiased estimate of parameter λ1, the pattern of the residual’s serial correlation has never been analysed. In fact, conditions λ0=0, λ1=1 in Eq. (1) alone cannot guarantee efficiency and rationality. The restrictions imposed on the parameters for the variables in the difference, as discussed in Section 4, imply that the residual has to obey a certain pattern to justify efficiency and rationality, in addition to the restrictions on the long run parameters. In the latter, the serial correlation problem is avoided by adopting non-overlapping data, i.e. the sampling period is the same as the forward contract period. However, this approach completely ignores the dynamic behaviour of foreign exchange market operations; and the agent, by assumption, will not adjust his position in a period shorter than the forward contract period. Even if λ0 and λ1 in Eq. (1) were unbiased in statistical terms, they would be distorted in economic terms. Indeed, much critical information reflecting the market and agent behaviour, especially that of the higher frequency components, has been lost in estimation, leaving the results obtained with little economic relevance and appeal. Third and finally, the “news” model, which introduces “news” or a risk premium into Eq. (1), effectively adds less persistent components to the right hand side of the equation. Eq. (1) is unlikely to hold properly, due to substantially different characteristics reflected in their spectral patterns on the two sides of the equation. Therefore, variables with higher frequency components would compensate for the relative lack of such components on the right hand side and make the model a “better fit”. To a certain extent, the “news” variables have played such a role, which does not appear to be fundamental to exchange rate determination.