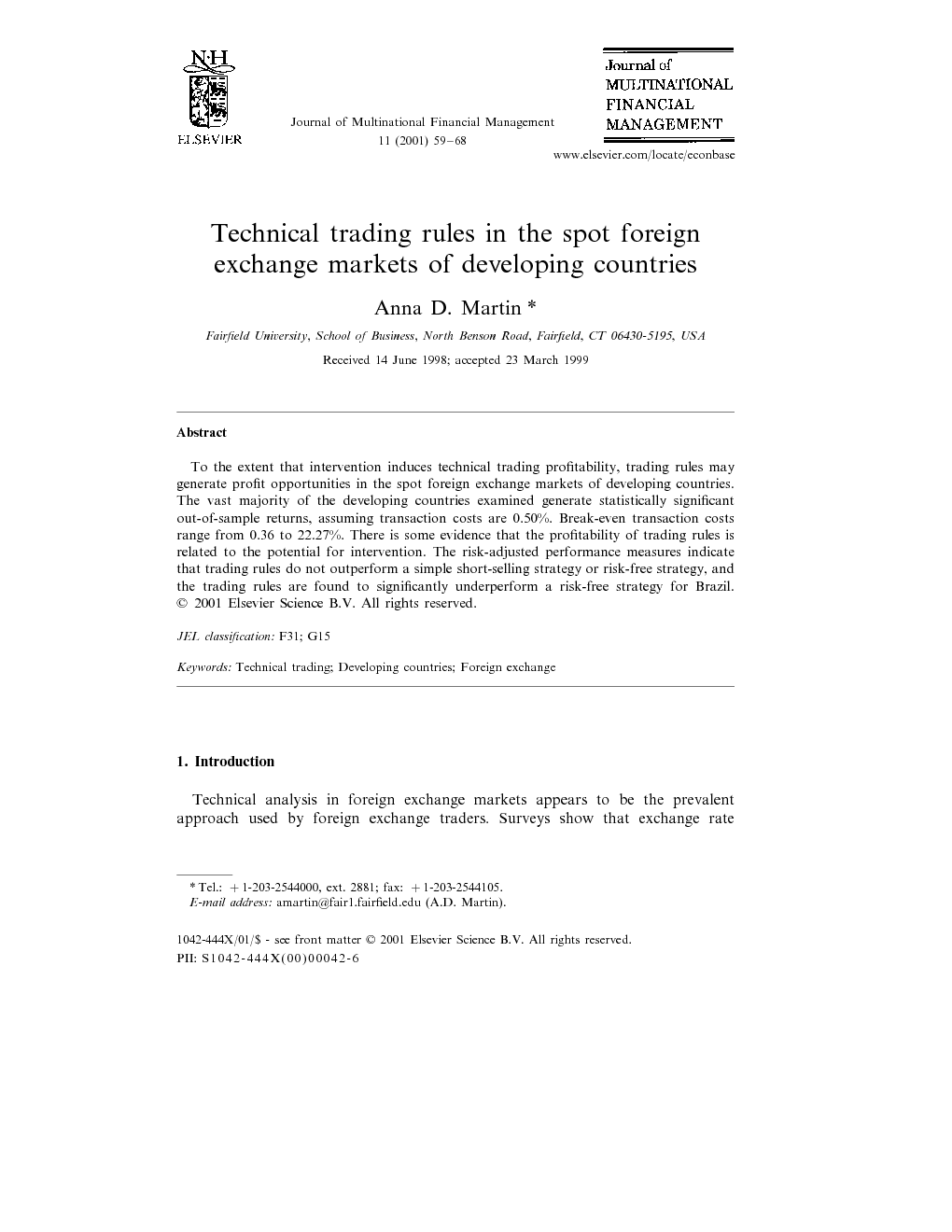 To the extent that intervention induces technical trading profitability, trading rules may generate profit opportunities in the spot foreign exchange markets of developing countries. The vast majority of the developing countries examined generate statistically significant out-of-sample returns, assuming transaction costs are 0.50%. Break-even transaction costs range from 0.36 to 22.27%. There is some evidence that the profitability of trading rules is related to the potential for intervention. The risk-adjusted performance measures indicate that trading rules do not outperform a simple short-selling strategy or risk-free strategy, and the trading rules are found to significantly underperform a risk-free strategy for Brazil.

Technical analysis in foreign exchange markets appears to be the prevalent approach used by foreign exchange traders. Surveys show that exchange rate forecasting is dominated by chartists (Allen and Taylor, 1989, Frankel and Froot, 1990, Taylor and Allen, 1992 and Lui and Mole, 1998). The popularity of technical trading rules is possibly a result of superior profits. Some academic studies have documented their profitability in the currency markets of developed countries (Sweeney, 1986, Levich and Thomas, 1993, Taylor, 1994, Neely et al., 1997, Szakmary and Mathur, 1997 and Neely, 1998). Central bank intervention may explain why trading rules are profitable (Corrado and Taylor, 1986, Sweeney, 1986, Sweeney, 1987, Taylor, 1994, Lee and Mathur, 1996 and Szakmary and Mathur, 1997). If government intervention in currency markets is ‘misguided’ (Sweeney, 1987 and Neely, 1998) or leaning-against-the-wind strategies are employed to reduce exchange rate volatility (Taylor, 1982, Corrado and Taylor, 1986 and Szakmary and Mathur, 1997), profit opportunities may be created for currency traders. The International Monetary Fund (IMF) annually publishes a report that details the various exchange rate regimes and restrictions employed by central banks. Regimes can be classified as free float, managed float, pegged, or fixed. Intervention does not exist under free float systems, whereas frequent intervention is necessary with fixed or pegged systems. Developing countries employ a variety of regimes, but generally, they tend to employ regimes that involve intervention. To the extent that intervention induces technical trading profitability, trading rules should generate considerable profit opportunities in the spot foreign exchange markets of developing countries. However, significant technical trading profits should not be revealed for countries that allow market forces to determine currency values. The degree of profitability should depend on the exchange rate regime employed. It is recognized that some governments limit or restrict speculative trading. Under these circumstances, financial institutions may be allowed to trade currencies amongst themselves. For example, Brazil does not allow brokers to maintain short positions. Although, ‘banks are permitted to buy and sell foreign exchange to each other without restriction’ (IMF, 1995, p. 68). The difficulty then becomes locating trading partners. The resulting transaction costs should be higher. Ultimately, the profitability of technical trading depends on the magnitude of these transaction costs. This paper investigates the profitability of moving average trading rules of developing country currencies and explores the relationship between profitability and exchange rate regime. Assuming transaction costs are 0.50%, eight (10) of 12 countries generate statistically significant out-of-sample returns using parametric (non-parametric) tests. The returns are not found to be related to the stated exchange rate regime. However, the returns are found to be are significantly correlated with the level of foreign currency reserves, which represents the potential for intervention. Using the Sharpe ratio to estimate the risk-adjusted performance, the trading rules are not found to outperform a risk-free strategy or even a simple short-selling strategy.

This study finds that profit opportunities can result from applying moving average trading rules to the spot foreign exchange markets of developing country currencies. The vast majority of the countries examined generate statistically significant out-of-sample returns using parametric and non-parametric tests, assuming transaction costs are 0.50%. Break-even transaction costs are calculated and range from 0.36 (Indonesia) to 22.27% (Brazil). Although a relationship between profitability and the stated exchange rate regime is not detected, a significant correlation exists between the out-of-sample returns and the level of foreign currency reserves. Thus, some evidence is provided that the profitability of moving average trading rules is related to the potential for intervention. To assess the risk-adjusted performance of the moving average trading rules, Sharpe ratios are calculated. The trading rules are not found to outperform a simple short-selling strategy or risk-free strategy. In the case of Brazil, the trading rules are found to significantly underperform a risk-free strategy.