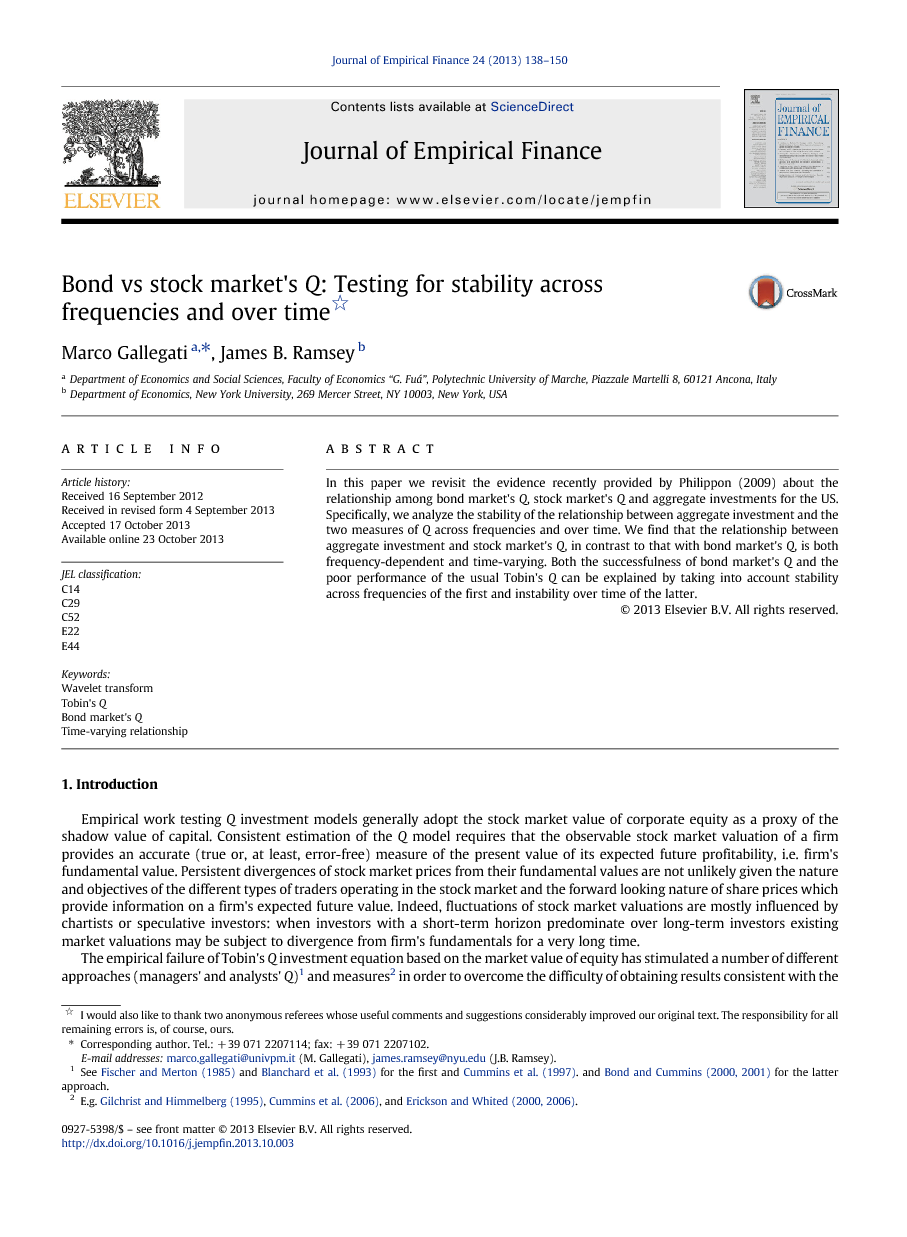 In this paper we revisit the evidence recently provided by Philippon (2009) about the relationship of aggregate investments with bond market's and stock market's Q for the US by exploiting the benefits of using the time-frequency “lens” of wavelet analysis for better exploration, evaluation and interpretation of relationship patterns between variables. Using continuous and discrete wavelet transforms tools we are able to provide important insights into the poor performance of the usual QT measure on one side, and the successfulness of bond market's Q on the other side. Firstly, our findings provide support to Philippon's explanation for the bond market's Q performing better than the usual measure of Q, namely that the bond market might be less noisy than the equity market because equity market can be subject to severe mis-pricing while the bond market is not, or at least, not as much. Indeed, after taking into account the effects of structural breaks in the Q-relationship we find that the mis-pricing effect has a prominent role in explaining the poor performance of Tobin's Q. The results at the longest scale are consistent with the hypothesis that the information content of stock market valuations tends to be more effective for investments in the long-run when existing market valuations are likely to better reflect the firm's fundamental value. Such a finding can reconcile the different puzzles characterizing the empirical literature on Tobin's Q, that is i) Q non-evidence, i.e. the lack of significance of QT regressor, and ii) non-Q evidence, i.e. the relevance of stock market for investment. Moreover, the results of “wavelet-based” exploratory and scale-by-scale regression analyses, with Philippon's bond-Q positively and significantly related to aggregate investment at almost any scale, indicate that the striking empirical performance of bond market's Q stems from the aggregation of variables displaying different relationships with aggregate investment at different time frames. To conclude, the hypothesis of a different information content of stock and bond market prices for investments at different horizons does not simply offer a more comprehensive view of aggregate investment, but also provides important implications for a multiscale approach to asset pricing. A theoretically plausible representation of the information content of asset prices and spreads about expected future returns and expected default risk, respectively, needs to consider the multiscale complex features of financial markets as evidenced by complementary rather than alternative effect of the information content of stock market's and bond market's prices for aggregate investment.