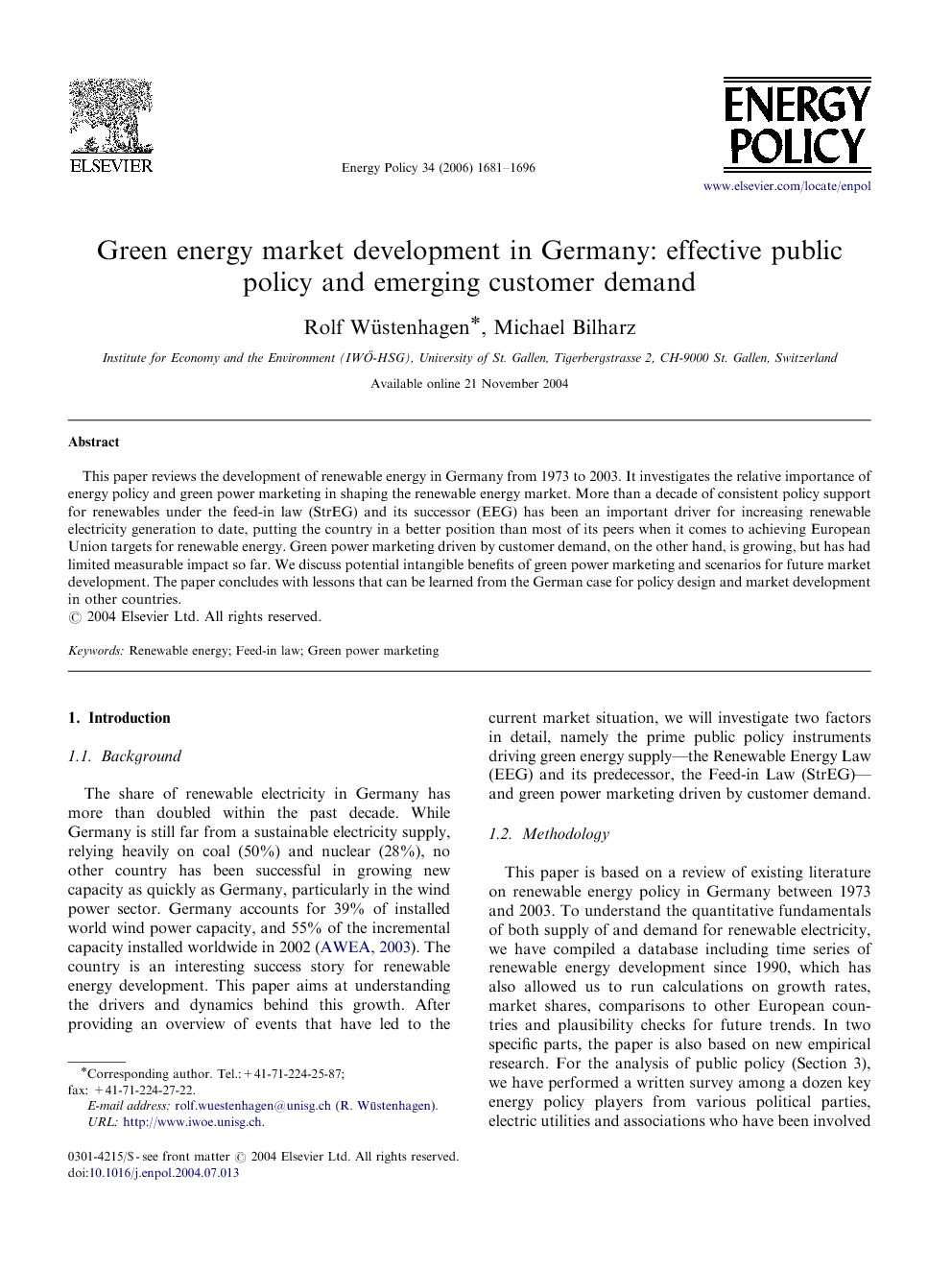 This paper reviews the development of renewable energy in Germany from 1973 to 2003. It investigates the relative importance of energy policy and green power marketing in shaping the renewable energy market. More than a decade of consistent policy support for renewables under the feed-in law (StrEG) and its successor (EEG) has been an important driver for increasing renewable electricity generation to date, putting the country in a better position than most of its peers when it comes to achieving European Union targets for renewable energy. Green power marketing driven by customer demand, on the other hand, is growing, but has had limited measurable impact so far. We discuss potential intangible benefits of green power marketing and scenarios for future market development. The paper concludes with lessons that can be learned from the German case for policy design and market development in other countries.

1.1. Background The share of renewable electricity in Germany has more than doubled within the past decade. While Germany is still far from a sustainable electricity supply, relying heavily on coal (50%) and nuclear (28%), no other country has been successful in growing new capacity as quickly as Germany, particularly in the wind power sector. Germany accounts for 39% of installed world wind power capacity, and 55% of the incremental capacity installed worldwide in 2002 (AWEA, 2003). The country is an interesting success story for renewable energy development. This paper aims at understanding the drivers and dynamics behind this growth. After providing an overview of events that have led to the current market situation, we will investigate two factors in detail, namely the prime public policy instruments driving green energy supply—the Renewable Energy Law (EEG) and its predecessor, the Feed-in Law (StrEG)—and green power marketing driven by customer demand. 1.2. Methodology This paper is based on a review of existing literature on renewable energy policy in Germany between 1973 and 2003. To understand the quantitative fundamentals of both supply of and demand for renewable electricity, we have compiled a database including time series of renewable energy development since 1990, which has also allowed us to run calculations on growth rates, market shares, comparisons to other European countries and plausibility checks for future trends. In two specific parts, the paper is also based on new empirical research. For the analysis of public policy (Section 3), we have performed a written survey among a dozen key energy policy players from various political parties, electric utilities and associations who have been involved in the renewable energy policy making process. For an in-depth analysis of green power marketing (Section 4), we have surveyed all the 16 marketers currently offering green power products nationwide, gathering information about products, customers, electricity sales, and new capacity created as the result of green power sales. For the few marketers who did not disclose their customer numbers to us, we made own estimates based on publicly available information and data we gathered for a similar survey that we have performed worldwide in 2001 (Bird et al., 2002). Information about individual marketers is confidential, but the summary data provides insights about market development.

Germany has been very successful in increasing the share of renewable electricity over the past decade, and this has largely been achieved by effective public policy. Within the public policy mix, the feed-in system was most significant. Demand from green power customers has also started to pick up, but impact on new capacity so far has been limited. In terms of lessons learned, we conclude by proposing a number of facilitating factors that helped the policy process in Germany, followed by recommendations for designing renewable energy policies and markets. In terms of facilitating factors, we would argue that the German model has been brought about by: • A strong central government and a political culture that is open to government intervention: The German feed-in system was initially designed by a coalition of conservatives, greens and a few social democrats, and was developed further under a red-green government. We propose that in a country with a liberal government that focuses on customer choice and takes a laissez-faire attitude towards environmental issues, as well as in a system with more decentralised power through strong regional governments or referenda, the introduction of a mandatory nationwide feed-in system will face more difficulties. In a cultural environment that puts higher emphasis on economic efficiency and trading, such as the UK, the apparent effectiveness of the German scheme may not be sufficient to overcome criticism about potential inefficiencies on the way, and quota systems or RPS schemes may have a better cultural fit. • A critical mass of interest groups in favour of renewables: Interest groups will only support renewable energy policy when there is something to gain for them. As in any emerging industry, a scattered group of innovative players will always face well-organised opposition from incumbents. It is therefore important to stress common grounds and form broad coalitions early on (as in the case of the wind and small hydro collaboration in Germany 1990) rather than getting caught up in intra-industry struggles between the different renewable technologies. • A critical mass of politicians with momentum and expertise about renewable energy: Especially in the case of EEG and the EEG amendment of 2004, developing renewable energy policy required both momentum and expertise. Small flaws in the regulation can lead to the collapse of early markets. Therefore, a critical mass of parliamentarians or members of the administration who understand the issues of renewable energy policy are a necessary prerequisite to formulate effective policies. If these three facilitating factors are sufficiently fulfilled, a country should be able to transfer lessons from the German system. In order to do so successfully, the following recommendations should be considered in designing renewable energy policies and markets: • The critical role of parliament: As the German example has shown, the electric utility industry and the federal Ministry of Economics have vested interests and can typically not be expected to be driving forces behind renewable energy legislation. Rather, members of parliament have taken the initiative, recently seconded by the federal Ministry of the Environment. 32 • Forming inter-party coalitions: The German example has shown that support for renewable energy cuts across traditional political camps. Therefore, even in the absence of a particularly environmentally minded government, majorities can be found by combining groups from the conservative (typically small hydro and biomass) and progressive (typically wind and solar) ends of the spectrum. • Careful burden sharing: As any policy measure, the feed-in system has costs and benefits. Distributing costs widely among a disperse group of people was a success factor, while over time beneficiaries have been able to create a visible lobby. Funding feed-in tariffs through people's electricity bills rather than through a government budget contributed to the resilience of this system in times of constrained public finances. Finally, the nationwide settlement system for burden sharing among utilities was decisive in overcoming resistance against continued growth of renewables. • Market liberalisation creates a window of opportunity: When the German power market was deregulated in 1998, temporary price reductions left some room for compensation of renewable generators. The changing rules of the game also led to the dissolution of existing power camps, enabling new coalitions, and weakening the homogeneity of established associations. This was particularly relevant in the policy discourse around the EEG in 2000. • Leaving room for customer demand to play its role: Even in a country with strong public policy support, there will always be customers who are ready to do their bit in achieving renewable energy targets more quickly or beyond government targets. Given the size of the sustainability challenge in the energy sector, it is important to enable this demand to unfold. Carefully designed eco-labelling schemes are key, and co-operation between renewable energy stakeholders and the marketing departments of energy providers can help to leverage private euros for the public good. • A piece of luck: Despite the fact that looking back, the German success story reads well for renewable energy supporters, we pointed out that the starting point, the adoption of the StrEG under the conservative-liberal government in 1990, was almost accidental, and that there were also several turning points, especially in 1998 and 2002, where it was unclear whether renewable energy growth would continue as smoothly.