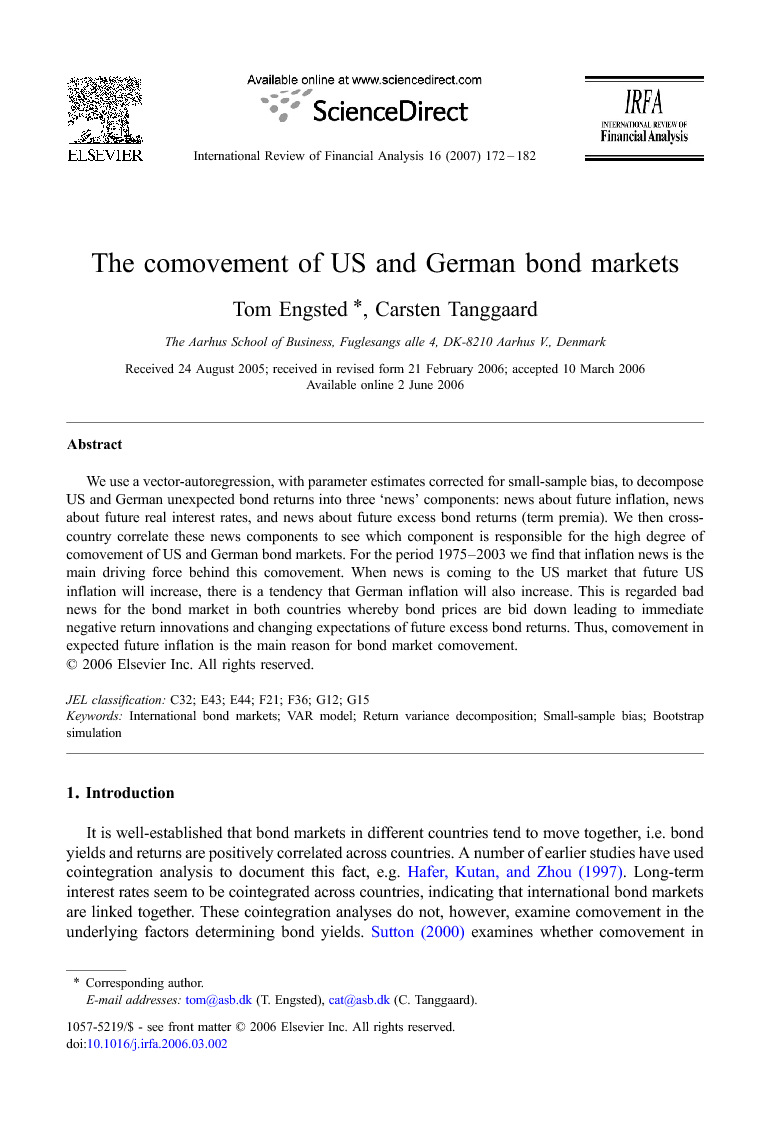 We use a vector-autoregression, with parameter estimates corrected for small-sample bias, to decompose US and German unexpected bond returns into three ‘news’ components: news about future inflation, news about future real interest rates, and news about future excess bond returns (term premia). We then cross-country correlate these news components to see which component is responsible for the high degree of comovement of US and German bond markets. For the period 1975–2003 we find that inflation news is the main driving force behind this comovement. When news is coming to the US market that future US inflation will increase, there is a tendency that German inflation will also increase. This is regarded bad news for the bond market in both countries whereby bond prices are bid down leading to immediate negative return innovations and changing expectations of future excess bond returns. Thus, comovement in expected future inflation is the main reason for bond market comovement.

It is well-established that bond markets in different countries tend to move together, i.e. bond yields and returns are positively correlated across countries. A number of earlier studies have used cointegration analysis to document this fact, e.g. Hafer, Kutan, and Zhou (1997). Long-term interest rates seem to be cointegrated across countries, indicating that international bond markets are linked together. These cointegration analyses do not, however, examine comovement in the underlying factors determining bond yields. Sutton (2000) examines whether comovement in long-term bond yields can be explained in terms of comovement in short-term interest rates (in accordance with the Expectations Theory), or is rather a consequence of comovement in term premia across countries. He finds that term premia comovement is the most important factor. Ilmanen (1995) suggests a number of factors determining international bond returns, and he finds that a small set of global (world) factors accounts for the predictable variation in bond returns and their cross-country correlation. In particular, wealth-dependent risk-aversion of bond investors appears to be an important source of the international comovement. Barr and Priestley (2004) also find that bond returns in different countries are predictable over time, and based on an international CAPM they find that 70% of the variation in expected returns is due to world risk factors while the remaining 30% is due to local country-specific risk factors. They interpret this result as indicating that national bond markets are only partially integrated into world markets. Driessen, Melenberg, and Nijman (2003) use a linear factor model and principal components analysis to analyze international bond returns, and they find that the positive correlation of bond returns is driven by the positive correlation between the levels of the term structures across countries.1 In the present paper we approach the international comovement of bond markets from a different angle. We do not search for a wide range of plausible underlying factors that can explain the comovement, or test specific international asset pricing models. Instead, we make use of the return variance decompositions developed by Campbell and Ammer (1993) and Engsted and Tanggaard (2001): we decompose excess bond return innovations in each country into three ‘news’ components: news about future long-term inflation, news about future real interest rates, and news about future excess bond returns (term premia). We then use a vector-autoregressive (VAR) model to compute these news and innovation components. The VAR model contains variables from each country, and we measure international bond market linkages by cross-country correlating the VAR generated news and innovation components. The appealing feature of our approach is that, apart from a linearization error, the return variance decomposition holds as a dynamic identity, i.e. from the way bond returns are defined unexpected excess bond returns can always be stated in terms of changes in expectations (‘news’) of future inflation, real interest rates, and term premia. Thus, these three news components jointly comprise all possible underlying economic factors governing the variation in bond returns. Recently it has been documented that in VAR models the traditional OLS parameter estimates may be severely biased in small samples, and that this bias may seriously distort statistics generated from the VAR, see e.g. Bekaert, Hodrick, and Marshall (1997). For this reason we use the analytical bias formula from Pope (1990) to correct the VAR parameter estimates for small-sample bias. In addition, we use standard bootstrap techniques to compute small-sample standard errors and confidence intervals of the VAR generated statistics. We apply our suggested procedure on monthly data from the US and German bond markets over the period 1975–2003. US is chosen for obvious reasons: it is the largest economy in the world and its economic development naturally affects the economic development in other major parts of the world. Germany represents the dominant European economy, and interest rates in most other European countries have been heavily influenced by German interest rates. Our most important empirical results can be summarized as follows. First, there is significant predictable variation in one-month excess bond returns in both countries. Second, there are important spillover effects from the US market to the German market, but only limited spillover effects the opposite way, and one-month excess bond returns in the US and Germany show a contemporaneous positive correlation of 0.54, indicating that bond markets in the two countries are closely linked together. Third, inflation news is the main driving force behind this comovement. When news is coming to the US market that future US inflation will increase, there is a tendency that German inflation will also increase. This is regarded bad news for the bond market in both countries whereby bond prices are bid down leading to immediate negative return innovations and changing expectations of future excess bond returns. Thus, in contrast to the results reported by Sutton (2000) where comovement in term premia is found to be the main reason for bond market comovement, our results suggest that expected future inflation is the main reason. Finally, our results are mostly robust to changes in the lag-length of the VAR and to changes in the sample periods. The rest of the paper is organized as follows. In Section 2 we present the basic bond return variance decomposition based on a VAR model, and we briefly describe the procedures for bias-adjustment of the VAR parameter estimates and the bootstrap simulations. Section 3 reports the empirical results, and offers some thoughts on the possible causes for inflation news comovement. Finally, in Section 4 we relate our findings to some other recent findings in the literature.

In this paper we have analyzed the comovement of US and German bond returns over the period 1975–2003 using VAR based return variance decompositions similar to the ones in Campbell and Ammer (1993) and Engsted and Tanggaard (2001). The results reported in this paper contrast with the results reported in Sutton (2000). He measures the extent to which bond market comovement can be explained in terms of comovement of short term nominal interest rates and term premia, respectively, but he does not isolate the effects from inflation and real interest rates. He finds that term premia comovement is the most important factor behind the comovement of international long-term interest rates. Our results, by contrast, imply only a minor role for term premia comovement and instead refer most of the comovement to comovement in inflation news. Our findings complement the findings in other recent studies. Our finding of predictable variation in US and German bond returns and that common movement in inflation news is the main factor behind the comovement of the bond markets in the two countries, complement Barr and Priestley's (2004) finding that most of the variation in international bond returns is due to world (global) risk factors rather than to country-specific factors. Furthermore, our analysis suggests a natural explanation for Dreissen et al.'s (2003) finding that positive correlation between the levels of the term structures across countries accounts for the positive correlation of international bond returns: the level of the term structure is most naturally determined by the rate of inflation, so cross-country correlation of inflation news will cause cross-country correlation of term structure levels. Of course, further analysis will be needed in order to explain the precise reasons for common movements in inflation news over time, and that the correlation seems to have increased recently (c.f. Table 4). We leave that for future research.