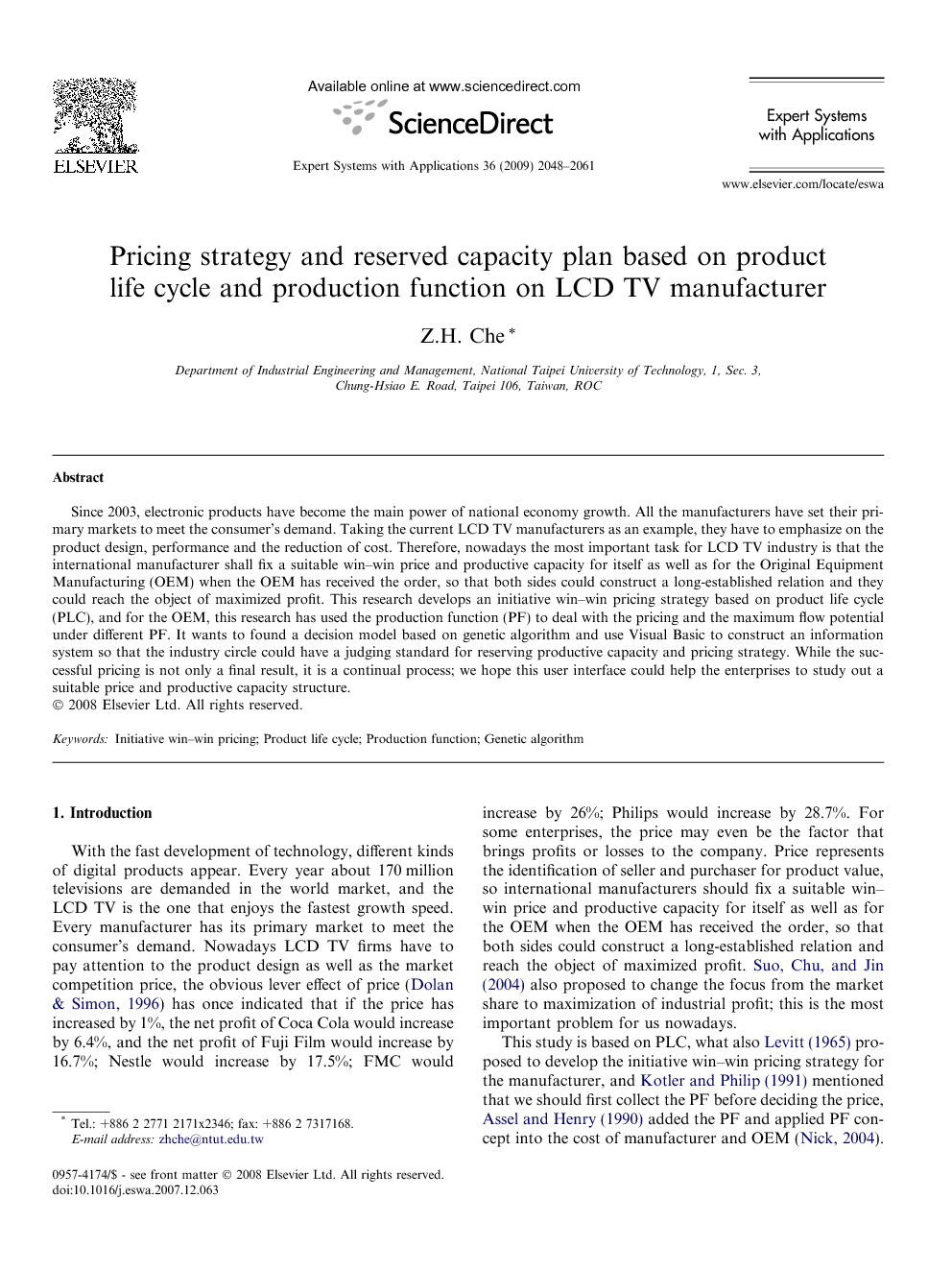 Since 2003, electronic products have become the main power of national economy growth. All the manufacturers have set their primary markets to meet the consumer’s demand. Taking the current LCD TV manufacturers as an example, they have to emphasize on the product design, performance and the reduction of cost. Therefore, nowadays the most important task for LCD TV industry is that the international manufacturer shall fix a suitable win–win price and productive capacity for itself as well as for the Original Equipment Manufacturing (OEM) when the OEM has received the order, so that both sides could construct a long-established relation and they could reach the object of maximized profit. This research develops an initiative win–win pricing strategy based on product life cycle (PLC), and for the OEM, this research has used the production function (PF) to deal with the pricing and the maximum flow potential under different PF. It wants to found a decision model based on genetic algorithm and use Visual Basic to construct an information system so that the industry circle could have a judging standard for reserving productive capacity and pricing strategy. While the successful pricing is not only a final result, it is a continual process; we hope this user interface could help the enterprises to study out a suitable price and productive capacity structure.

With the fast development of technology, different kinds of digital products appear. Every year about 170 million televisions are demanded in the world market, and the LCD TV is the one that enjoys the fastest growth speed. Every manufacturer has its primary market to meet the consumer’s demand. Nowadays LCD TV firms have to pay attention to the product design as well as the market competition price, the obvious lever effect of price (Dolan & Simon, 1996) has once indicated that if the price has increased by 1%, the net profit of Coca Cola would increase by 6.4%, and the net profit of Fuji Film would increase by 16.7%; Nestle would increase by 17.5%; FMC would increase by 26%; Philips would increase by 28.7%. For some enterprises, the price may even be the factor that brings profits or losses to the company. Price represents the identification of seller and purchaser for product value, so international manufacturers should fix a suitable win–win price and productive capacity for itself as well as for the OEM when the OEM has received the order, so that both sides could construct a long-established relation and reach the object of maximized profit. Suo, Chu, and Jin (2004) also proposed to change the focus from the market share to maximization of industrial profit; this is the most important problem for us nowadays. This study is based on PLC, what also Levitt (1965) proposed to develop the initiative win–win pricing strategy for the manufacturer, and Kotler and Philip (1991) mentioned that we should first collect the PF before deciding the price, Assel and Henry (1990) added the PF and applied PF concept into the cost of manufacturer and OEM (Nick, 2004). Then we would focus on the market share of the output (Jüttner, Godsell, & Christopher, 2006), and the relative price difference ratio of the former products is also a key factor to affect the market share, price has replaced the one-sided elastic effect of tradition research as one of the key variables, it has considered the different PLC stages (introducing stage, growth stage, mature stage and decline stage) of the products of the manufacturer and OEM under different PFs. And some study such as the essay of Safaei, Sadjadi, and Babakhani (2006) suggested using genetic algorithm to get the selling price when the products are sold in two or more markets. When we use genetic algorithm, only fitness value is necessary, we do not need the derivative of the function or some other complex operations or information. What’s more, genetic algorithm is more flexible and it does not need the whole information of problem structure and all the parameters which are necessary for the traditional optimization method (Beddoe & Petrovic, 2006). And Midgley, Marks, and Cooper (1997) suggested that in unsymmetrical competitive market and the oligopoly market we could use genetic algorithm to predict the optimal quantity and use the pricing of brand product to reach the optimal profit, and we also could use competitive policy to calculate market structure and use genetic algorithm to predict the pricing of the product under this pricing structure. In our research the PLC and PF are considered. Hence, the mathematic model for initiative win–win price strategy in this study is more complex and has characteristics of time-consuming to solve. Accordingly, we also mainly use genetic algorithms to assist problem solving. This research hoped to build a model based on genetic algorithm, and it used Visual Basic to construct the information system, so that companies could consider both its self-profit and the long-established relations with the appurtenant manufacturers to reach the maximized profit. Because the price competition is the fatal killer for enterprise profit, they should try their best to avoid the would-be price war.

The initiative win–win pricing model first focuses on the market surplus which has effectively helped its appurtenant industry to gain the maximization of the total profit. This research firstly focused on the market surplus, then on the market share of manufacturer and OEM output, and the relative price difference ratio of the products of all the generations is also a key factor to influence the market share, by doing this; it has replaced the one-sided elastic effect of traditional research. And the pricing model of this research included the market competition factor corresponding to market changes, the price difference ratio between the OEM and manufacturer, and the long-term policy cooperation factor of the manufacturer when it wants to build a long-established relation with OEM to pursue the maximization of profit. The initiative win–win model constructed by this research takes the PLC as integral basis, reposes the PF on cost level, and has changed the relevant factors in quantity and time directions, it has considered the possibility of dynamic variations caused by time changes in hopes that it could provide a perfect program for the price decision of the enterprise. The numerical analysis result shows that after genetic algorithm, these factors could figure out the optimal value based on the conditions of restriction formula, and display the benefit of initiative model in good time.