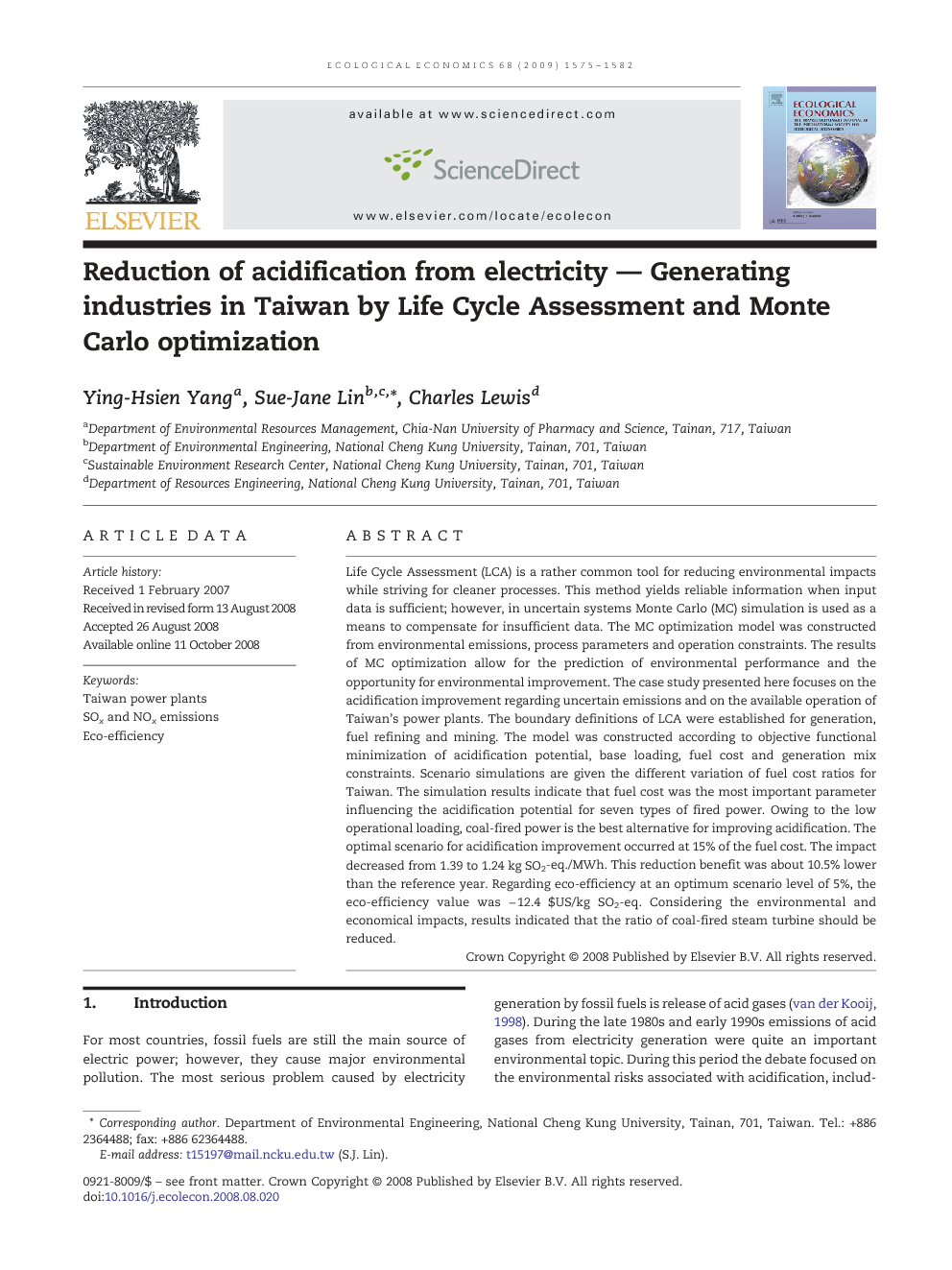 Life Cycle Assessment (LCA) is a rather common tool for reducing environmental impacts while striving for cleaner processes. This method yields reliable information when input data is sufficient; however, in uncertain systems Monte Carlo (MC) simulation is used as a means to compensate for insufficient data. The MC optimization model was constructed from environmental emissions, process parameters and operation constraints. The results of MC optimization allow for the prediction of environmental performance and the opportunity for environmental improvement. The case study presented here focuses on the acidification improvement regarding uncertain emissions and on the available operation of Taiwan's power plants. The boundary definitions of LCA were established for generation, fuel refining and mining. The model was constructed according to objective functional minimization of acidification potential, base loading, fuel cost and generation mix constraints. Scenario simulations are given the different variation of fuel cost ratios for Taiwan. The simulation results indicate that fuel cost was the most important parameter influencing the acidification potential for seven types of fired power. Owing to the low operational loading, coal-fired power is the best alternative for improving acidification. The optimal scenario for acidification improvement occurred at 15% of the fuel cost. The impact decreased from 1.39 to 1.24 kg SO2-eq./MWh. This reduction benefit was about 10.5% lower than the reference year. Regarding eco-efficiency at an optimum scenario level of 5%, the eco-efficiency value was − 12.4 $US/kg SO2-eq. Considering the environmental and economical impacts, results indicated that the ratio of coal-fired steam turbine should be reduced.

For most countries, fossil fuels are still the main source of electric power; however, they cause major environmental pollution. The most serious problem caused by electricity generation by fossil fuels is release of acid gases (van der Kooij, 1998). During the late 1980s and early 1990s emissions of acid gases from electricity generation were quite an important environmental topic. During this period the debate focused on the environmental risks associated with acidification, including the food risk, the risk of destruction of the ozone layer, and so on (Chestnut and Mills, 2005). Thus, given that fossil fuel is the major energy source of electricity, the reduction of acidification gases is an important topic. According to the air pollutants database of TEDS 6.0 by Taiwan EPA, acidification gases are the largest emissions produced from the electricity-generating sector. The total emission of sulfur dioxide was 217,400 tons/year during 2003 in Taiwan, with electricity associated emissions totaling 56,524 tons, and the percentage was at 26% for all industrial sectors. As for NOx emissions, which totaled 534,500 tons/year during 2003, the emission of the electricity sector totaled 69,485 tons/year and its ratio was 13%. Owing to restrictions on the relatively higher cost of renewable energy and the inherent risks of nuclear power, thermal power dominates power generation in Taiwan. In 2005, the electricity ratio was up to 75.6% sourced from fossil fuels. Thermal powers thus remain the prime target for the improvement of acidification, especially with regard to the fossil fuel power plants. Full consideration of the acidification was based upon Life Cycle Assessment (LCA), which is an integrated approach to estimate environmental impacts from cradle to grave; the LCA results not only provide quantitative and qualitative analysis of environmental impacts, and but they can provide a reference tool for decision-making concerning environmental improvements. To reduce decision-making bias, uncertainty analysis should also be considered. Sources of uncertainty include parameter uncertainty, model uncertainty, uncertainty due to choices, temporal variability, variability between sources and objects, etc.(Huijbregts,1998) (cited by Sonnemann et al., 2003). The Monte Carlo (MC) method is a mathematical method that is based on statistical probability, and it is applied to minimize uncertainty in LCA (Sonnemann et al., 2003). With regard to the integration of MC and optimization for electric power case studies, Asgarpoor et al. (1996) applied the MC optimization model for uncertainty regarding sulfur dioxide emissions from electric power (Asgarpoor and Benson, 1996 and Asgarpoor et al., 1996). Furthermore, Wen and David (2001) employed MC optimization to determine the best feasible operating conditions for supplies and consumers of electricity in California. In a study of the electricity market, Yang and Wen (2005) studied its foundation, operating feasibility, and structure and searched the limiting conditions to identify the maximum allowable profits by MC optimization. A similar MC model can be adapted to forecast the benefits based on uncertainties concerning the regulation, operation parameters and fuel generation mix. The purpose of combining LCA with MC optimization lies in offering acidification improvement and providing uncertainty analysis in relation to electric power. An integrated LCA approach will be provided. Mitigation tactics for the acidification improvement for the electricity supply industry include a primary emphasis on improving energy efficiency and a secondary emphasis on shifting to alternate fuels, or using lower content sulfur fuel (Lopez and Mandujano, 2005), enhancing pollution control technology, and relying upon renewable energy use (van der Kooij, 1998). On the power supply side, improvements in the renewable energy for the long-term and fuel shifts should be considered to reduce the environmental impact associated with fossil fuel. However, in the short-term, the fossil fuels will remain the primary power source in Taiwan. Therefore, this study examines the operation tactic improvements for power generations by considering the economic and technological feasibilities, respectively. From the perspective of generation cost, the total cost to reduce acid gases by fuel shift in the short-term is of concern. To further clarify the feasibility of environmental potential and economic relationships an eco-efficiency (Schmidheiny, 2000 and Verfaillie and Bidwell, 2000) indicator will be used in this study. The eco-efficiency index can be important as a sustainability indicator so that companies can improve their products (Syrrakou et al., 2005 and Park et al., 2005). Moreover, the idea of combining LCA with eco-efficiency has been used for the environmental policy regarding the oil and gas production in the North Sea (Huppes et al., 2006). Korhonen and Luptacik (2004) used I / O analysis to analyze a power plant. They combined the technical efficiency and ecological efficiency to analyze its eco-efficiency based on the total and pollutant decrement costs. Botha and Blottnitz (2006) compared the environmental and economic benefits of renewable energy by eco-efficiency and LCA. Consequently, eco-efficiency is an important indicator and is applied to assess the discrepancies in the fuel switching problems regarding the improvement of acidification issues. The aim is to obtain a management policy that provides the optimum combination of the economy and environment. This study focuses on the acidification improvement of electric power generation via MC optimization throughout the life cycle of the plant. Meanwhile, taking the electric power industry in Taiwan as a case study, we simulated various scenarios for achieving acidification improvement. The available operation parameters and improvement potential are simulated by combining LCA and the MC optimization model. Different scenarios will be based on the consideration of the total fuel cost, releasing the competitive effect of the fuel selection among the thermal power plants. Moreover, an eco-efficiency indicator is applied to suggest a cleaner power mix from considerations of acidification impact and cost. These results that are based on acidification improvement will provide simulation results for the decision-maker regarding the power mix for the operation process and fuel switches that need to be considered.

This study aims to find a feasible simulation via the fuel shift method. The simulation is based on the same electric installation capacity and the available range of operation parameters. The objective is to determine the improvement direction by fuel selection among the thermal power plants. The simulation model combines LCA with MC optimization to sort the optimal parameters of fuel selection for the power generation. The scenarios for analysis of fuel increase ratio were compared to the reference year of 2003. The optimal solutions of parameters can be used to simulate the acidification potential and uncertainty by MC simulation. The MC method is important for cases where inventory data is insufficient. MC optimization simulation results predict the optimal objective and operation parameters, and this optimization facilitates more effective predictions and better results than for certain models owing to setting single average inventories and parameters. Results will provide the policy makers with fuel selection in regard to environmental and eco-efficiency issues. Acidification improvement was optimized at 15% of the fuel cost ratio in this study. The reduction effect was about 10.5% compared to the reference year of 2003. Furthermore, the drag force of the acidification improvement was derived primarily from decreasing the power mix of the steam turbine–coal. Moreover, the composition ratio of the steam turbine–coal reduced from 0.42 to 0.36 for Taiwan electric power. From an eco-efficiency perspective, the optimal scenario was at 5% of the fuel cost ratio, and the eco-efficiency was highest at − 12.4 $US/kg SO2-eq. Considering the economy and the environment, the power mix of the steam turbine–coal can be reduced from 0.42 to 0.399, thus reducing acidification for electric power in LCA. The results indicated that the ratio of coal-fired steam turbine should be reduced from the fuel alternatives. Additionally, the results of this study can assist in improving electrical power in relation to acidification in Taiwan.