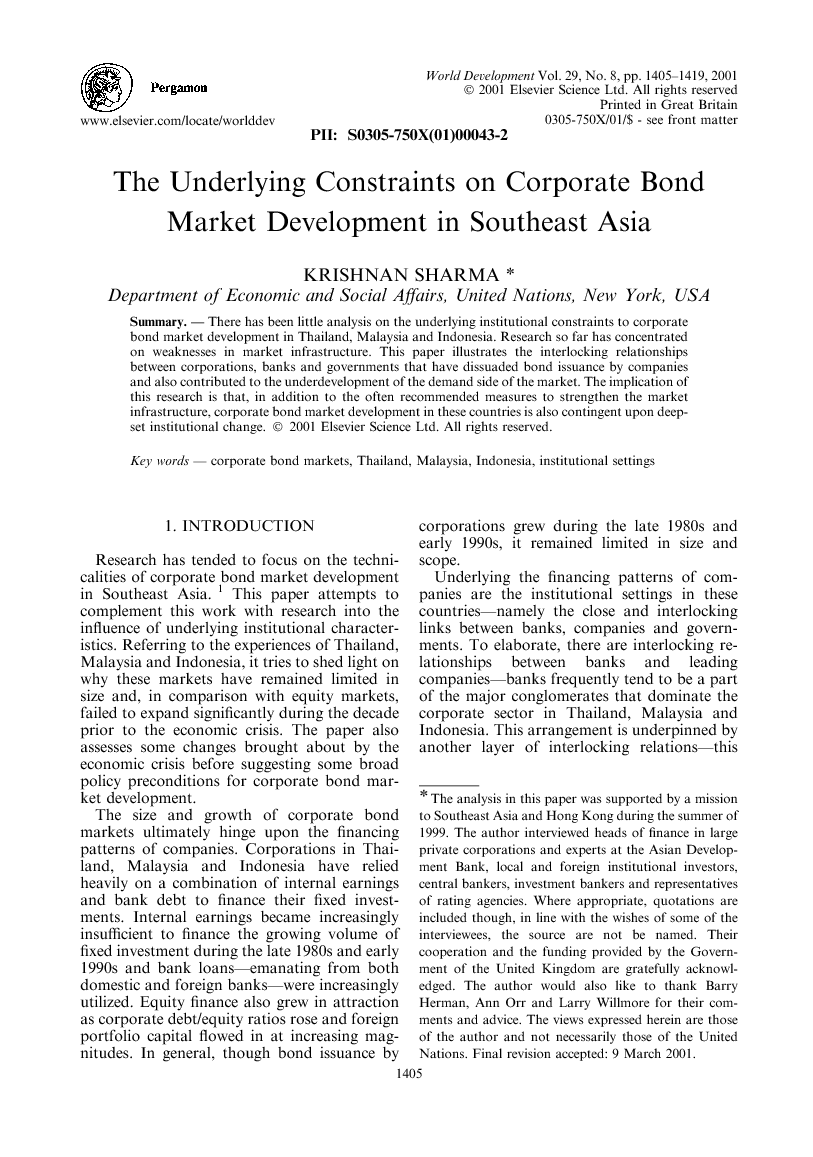 There has been little analysis on the underlying institutional constraints to corporate bond market development in Thailand, Malaysia and Indonesia. Research so far has concentrated on weaknesses in market infrastructure. This paper illustrates the interlocking relationships between corporations, banks and governments that have dissuaded bond issuance by companies and also contributed to the underdevelopment of the demand side of the market. The implication of this research is that, in addition to the often recommended measures to strengthen the market infrastructure, corporate bond market development in these countries is also contingent upon deep-set institutional change.

Research has tended to focus on the technicalities of corporate bond market development in Southeast Asia.1 This paper attempts to complement this work with research into the influence of underlying institutional characteristics. Referring to the experiences of Thailand, Malaysia and Indonesia, it tries to shed light on why these markets have remained limited in size and, in comparison with equity markets, failed to expand significantly during the decade prior to the economic crisis. The paper also assesses some changes brought about by the economic crisis before suggesting some broad policy preconditions for corporate bond market development. The size and growth of corporate bond markets ultimately hinge upon the financing patterns of companies. Corporations in Thailand, Malaysia and Indonesia have relied heavily on a combination of internal earnings and bank debt to finance their fixed investments. Internal earnings became increasingly insufficient to finance the growing volume of fixed investment during the late 1980s and early 1990s and bank loans—emanating from both domestic and foreign banks—were increasingly utilized. Equity finance also grew in attraction as corporate debt/equity ratios rose and foreign portfolio capital flowed in at increasing magnitudes. In general, though bond issuance by corporations grew during the late 1980s and early 1990s, it remained limited in size and scope. Underlying the financing patterns of companies are the institutional settings in these countries—namely the close and interlocking links between banks, companies and governments. To elaborate, there are interlocking relationships between banks and leading companies—banks frequently tend to be a part of the major conglomerates that dominate the corporate sector in Thailand, Malaysia and Indonesia. This arrangement is underpinned by another layer of interlocking relations—this time between governments and the business families that control the conglomerates/banks—that provide the security of government support. These settings created strong incentives for companies to rely heavily on banks for their external finance. Moreover, during the decade prior to the crisis, they also generated the conditions that led to a large increase in bank borrowing. The resulting sharp rise in leverage meant that, over and above bank borrowing, companies' additional financing needs were more for instruments such as equities, that helped to cushion and diversify risks, rather than for more debt in the form of bonds. Moreover, the interlinkages between business and government may also have contributed to the underdevelopment of the demand side of the corporate bond market. There is evidence to suggest that issues relating to corporate transparency and the legal rights of creditors have assumed increased importance to investors, especially foreign ones, in the wake of the recent crisis. Interestingly, recent research by (Claessens, Djankov, & Lang, 1999) has underlined the possibility of a strong relationship between legal and judicial conditions (including factors impinging on the legal protections of creditors) and the concentration of control of the corporate sector by a few business families. The findings of this research can be interpreted to imply that the vested interests of powerful and politically-connected business families may have contributed to the legal infrastructure in these countries. The implication of all this is that sustained corporate bond market development is contingent on deep-set institutional change, in addition to the often recommended measures to strengthen the market infrastructure. The paper proceeds to outline the underlying preconditions for developing corporate bond markets and also assesses the changes that have taken place in the aftermath of the recent economic crisis. The following points need to be stressed about this paper: —The issues here are far too complex to call this a definitive analysis—the findings of the study represent hypotheses that need to be reviewed and augmented by further research. The aim here is to provide a framework for this research and encourage discussion on a topic that has rarely been analyzed in the past. The crosscountry generalizations made in this paper apply to different degree in each of the countries and the paper notes significant differences where they exist. —As mentioned earlier, the paper concentrates on developments and data prior to the crisis and mostly during the 1980s and the first half of the 1990s. It also examines changes brought about by the crisis. It does not attempt, however, to cover all the relevant developments subsequent to the crisis—other than point out some of the most important reforms. —The choice of Thailand, Malaysia and Indonesia is due to some key similarities—relating to the structure of their financial systems, experiences with financial liberalization in the late 1980s and early 1990s, and the serious present day problems with the banking sector. These similarities allow for coherent analyses, which would have been much more difficult if a larger and more diverse group of countries were studied. The paper is structured as follows: 2 and 3 will provide an empirical foundation by respectively describing relevant aspects of the financial systems in Thailand, Malaysia and Indonesia and illustrating the financing patterns of corporations in these countries. Section 4 explores the institutional constraints on bond issuance and Section 5 examines the potential underlying shortcomings on the demand side. Section 6 assesses the likely effects of the recent economic crisis and the need for developed corporate bond markets. In the context of the preceding analysis, Section 7 assesses the underlying preconditions for developing corporate bond markets.

Corporate bond market development is ultimately a function of the institutional settings in Thailand, Malaysia and Indonesia. This paper points out some of the underlying reforms that may need to be implemented in this respect in order to improve the underlying attractiveness of corporate bond issuance and investment. These include corporate sector and banking reforms, the strengthening of legal processes and improvements in business transparency. All these objectives are inextricably linked and the necessary measures may therefore need to be implemented in an integrated manner. Yet the development of corporate bond markets should be viewed as an incremental process that takes place over a number of years. By their very nature, and given their social and political implications, the above reforms are likely to be implemented gradually rather than rapidly. Moreover, efforts to resolve these underlying issues need to go hand in hand with policies to strengthen market infrastructure and make regulation favorable to both bond issuance and to the operations of local and foreign investors. In the final analysis, the “underlying” institutional and the “apparent” infrastructure-oriented preconditions for developing corporate bond markets should be viewed as complementary and mutually reinforcing.