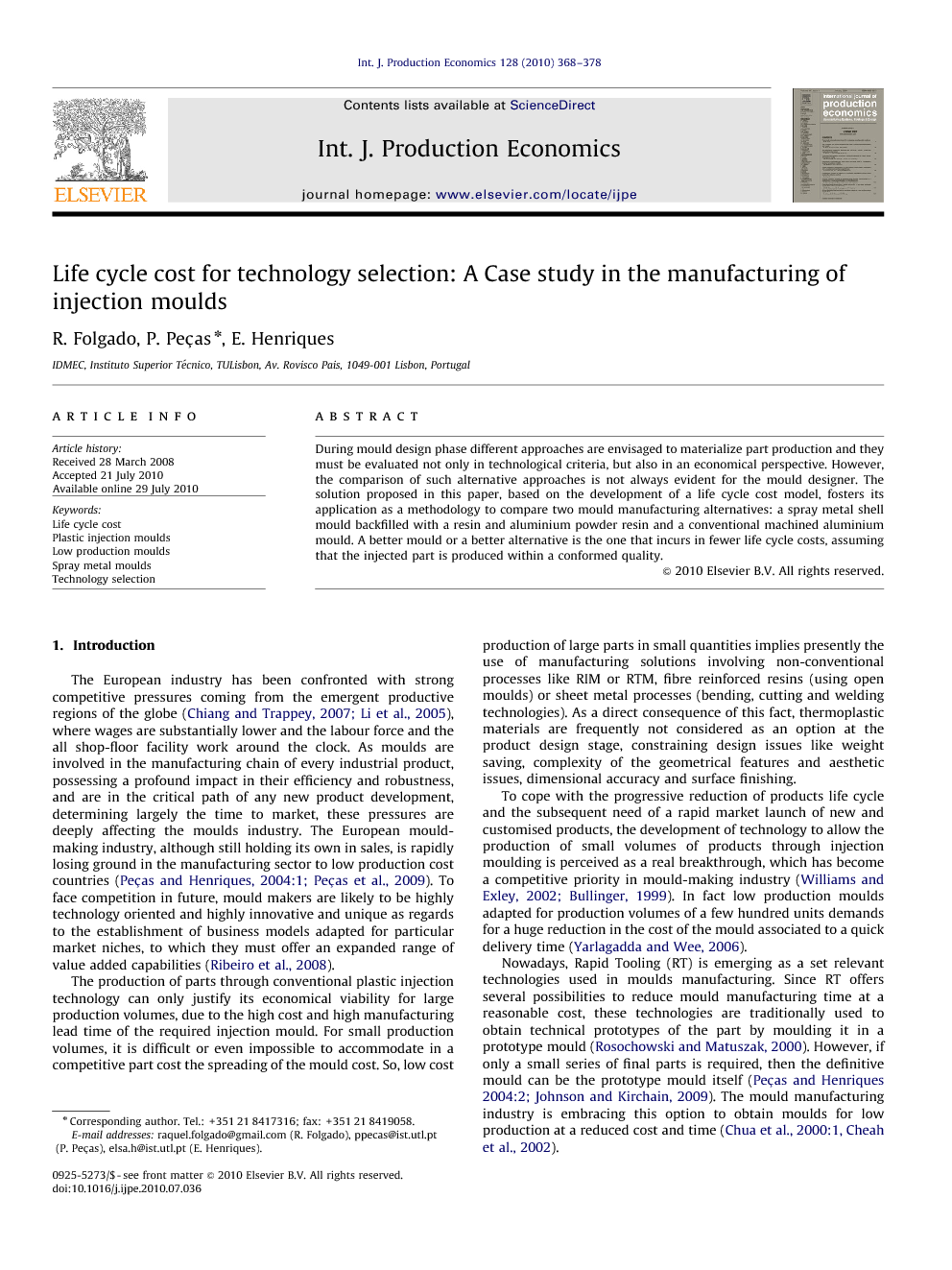 During mould design phase different approaches are envisaged to materialize part production and they must be evaluated not only in technological criteria, but also in an economical perspective. However, the comparison of such alternative approaches is not always evident for the mould designer. The solution proposed in this paper, based on the development of a life cycle cost model, fosters its application as a methodology to compare two mould manufacturing alternatives: a spray metal shell mould backfilled with a resin and aluminium powder resin and a conventional machined aluminium mould. A better mould or a better alternative is the one that incurs in fewer life cycle costs, assuming that the injected part is produced within a conformed quality.

The injection moulding of thermoplastic parts in very low production volumes has severe competitive constraints, due to the high cost of the mould which represents a large portion of the cost per part injected. Spray metal shell moulds backfilled with resin and aluminium powder moisture appears as a technological viable approach to deal with the injection of small quantities of parts. The economical viability can be deeply understood through the application of LCC procedures to the mould life cycle. In this paper, an LCC parametric model was developed to compare two manufacturing processes alternatives: one that uses a spray metal mould and another that uses a conventional mould based on machined aluminium. By varying the inputs of the LCC model, according to the analysis scenarios, the life cycle behaviour of the alternative moulds can be observed, understood and predicted. The alternative, emerging as having the lowest life cycle cost, comes out as the “best solution”. In a very low production scenario, the SMT mould reveals to be the best choice, in an economic point of view. However for larger production volumes, the CM mould arrives on the economical scene. This is due to two factors. By one side the smaller injection cycle of the aluminium mould, by the other side the need of replacing the core and cavity of the SMT mould after a considerably reduced batch of parts, due to wearing and degradation mechanisms of the moulding surfaces. In other words a small SMT mould duration affects its life cycle cost and consequently its economic performance. However, it should be noted that in some competitive conditions, where the market risk is considerable and supported by the mould maker the STM mould alternative can be the sustainable solution. The initial investment cost in the mould is lower and the subsequent moulds, if necessary, turn up as a variable cost. The developed work of analysing different industrial scenarios concludes that the LCC is a useful approach to analyse the life cycle of moulds for injection of plastic parts.