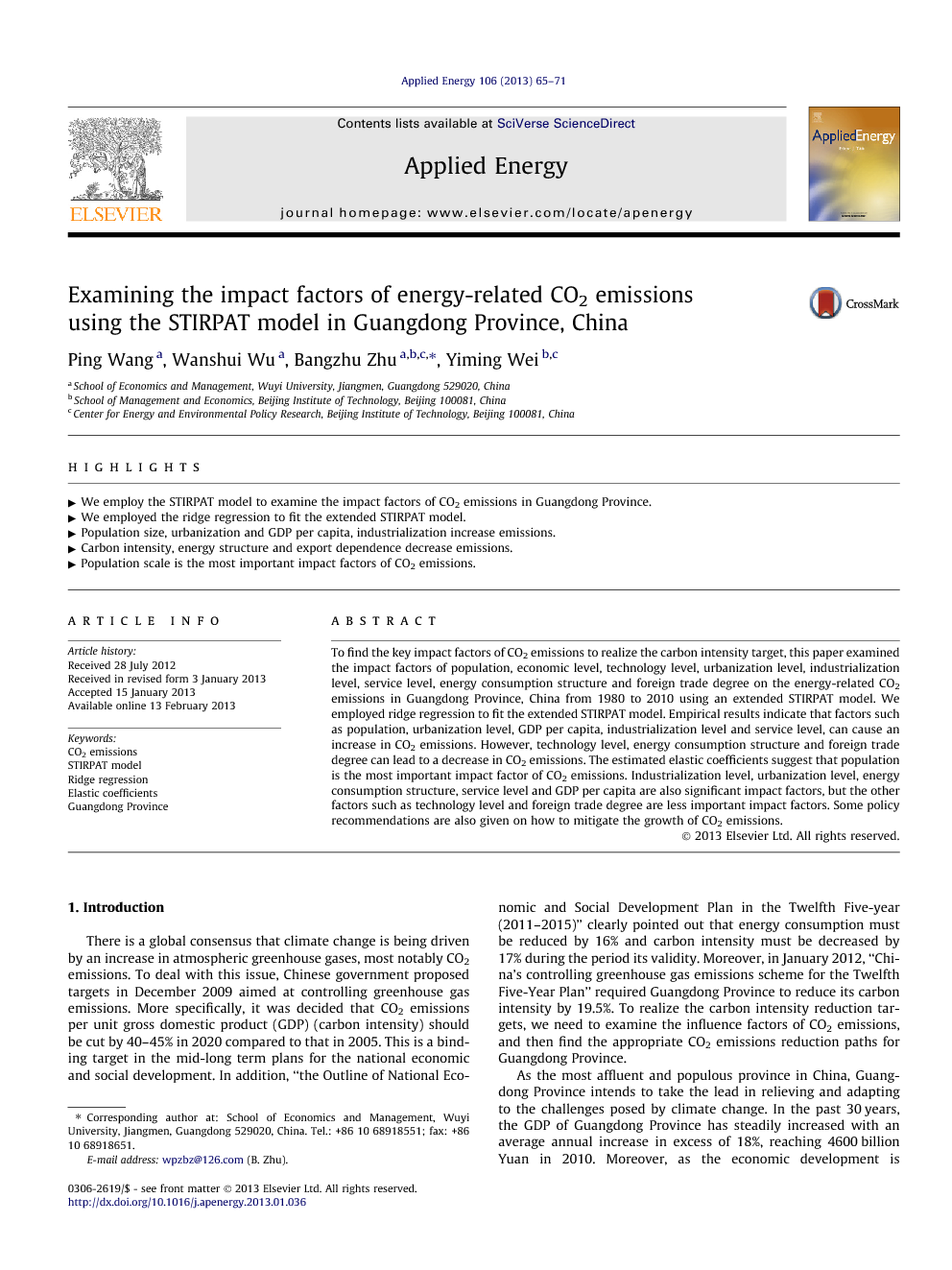 Using the energy consumption, economic and social development related data in Guangdong Province for the period 1980–2010, we dynamically estimated the energy-related CO2 emissions in Guangdong Province in compliance with the IPCC National Greenhouse Gas Inventories. The estimation results show that CO2 emissions in Guangdong Province are maintaining a trend of rapid growth. Further, we examined the impact factors of CO2 emissions with the extended STIRPAT model incorporating ridge regression and led to the following conclusions. We find that population scale, urbanization level, GDP per capita, industrialization level and service level have promoting effects on CO2 emissions. Conversely, carbon emission intensity, energy consumption structure and foreign trade degree produce negative, inhibitory effects. In terms of decreasing magnitude of importance, their degrees of influence can be ranked as: population scale, industrial level, urbanization level, energy consumption structure, service level, GDP per capita, carbon emission intensity, and foreign trade degree. Population has a strong, positive influence on CO2 emissions, which is closely connected to the rapid growth of population scale and urbanization in Guangdong Province in the past 30 years. Hence, Guangdong Province should continue to control population scale, promote stable population urbanization and pay attention to optimizing population structure and quality. In addition, it should also make more effort to improve the public low-carbon awareness, strengthen the generalization of a low-carbon economy, low-carbon consumption and green consumption, promoting households to keep to a sustainable consumption mode. GDP per capita, industrialization level and service level constitute strong, positive influences on CO2 emissions. This is directly related to the fact that Guangdong Province’s GDP, especially from secondary industry, has increased in value. Growth rate has continuously kept above 10%. Thus, in order to mitigate such a positive influence, it will be necessary to optimize industrial structure, make an appropriate reduction in secondary industrial proportion, greatly develop the tertiary industry, develop the emerging low-carbon industry and boost the upgrade and cluster development of the traditional high energy consumption industry. In addition to that, it will also be necessary to reduce the GDP growth rate. This would lower the rapid growth in CO2 emissions, contributing to a coordinated development of economy, society and environment. Energy consumption structure has a rather prominent negative influence on CO2 emissions. This is directly attributed to the diligent attention of Guangdong Province to energy consumption structure optimization. In the future, Guangdong Province needs to gradually decrease the proportion of high-carbon energy such as coal and coke that it uses. Moreover, it needs to fully develop and use renewable low-carbon energy resources such as solar energy, wave energy and wind energy. It also needs to greatly develop new energy sources to carry on optimization of its energy consumption structure. Carbon emission intensity contributes a small, negative influence on CO2 emissions. This is mostly due to Guangdong Province’s great attention to upgrading industrial structure, energy structure adjustment and technical level advancements made in recent years. In the future, Guangdong Province should continue to target cuts in energy consumption per unit GDP. It should also create a target responsibility system and take various measures such as accelerating research and development in low-carbon technology, popularizing new energy-saving products and new technologies, and implementing incentive policies and so on to strengthen energy saving and emission reduction, thus improving energy efficiency. Foreign trade degree also has a small negative influence on CO2 emissions. This has been due to Guangdong Province’s attention to its import and export balance and to the upgrade and transformation of nature of the products exported. It is recommended that Guangdong Province should carry on expanding domestic demands to gradually develop a balance between foreign trade and domestic demand. Meanwhile, it should also accelerate the technological upgrading of its export products and realize schemes of renewal and reconstruction based on energy-saving technologies. The conclusions drawn from this study have an important reference value for policy makers in assisting their design and implementation of appropriate energy saving and emission reduction measures for Guangdong Province, and also have academic value in terms of enriching low carbon economy research systems in China. However, this study is still preliminary, and many aspects such as population structure, energy intensity and consumption mode are worthy of further study. Moreover, policy modeling and pathway choice for the realization of carbon intensity targets are valuable, and thus are also worthy of close research attention.