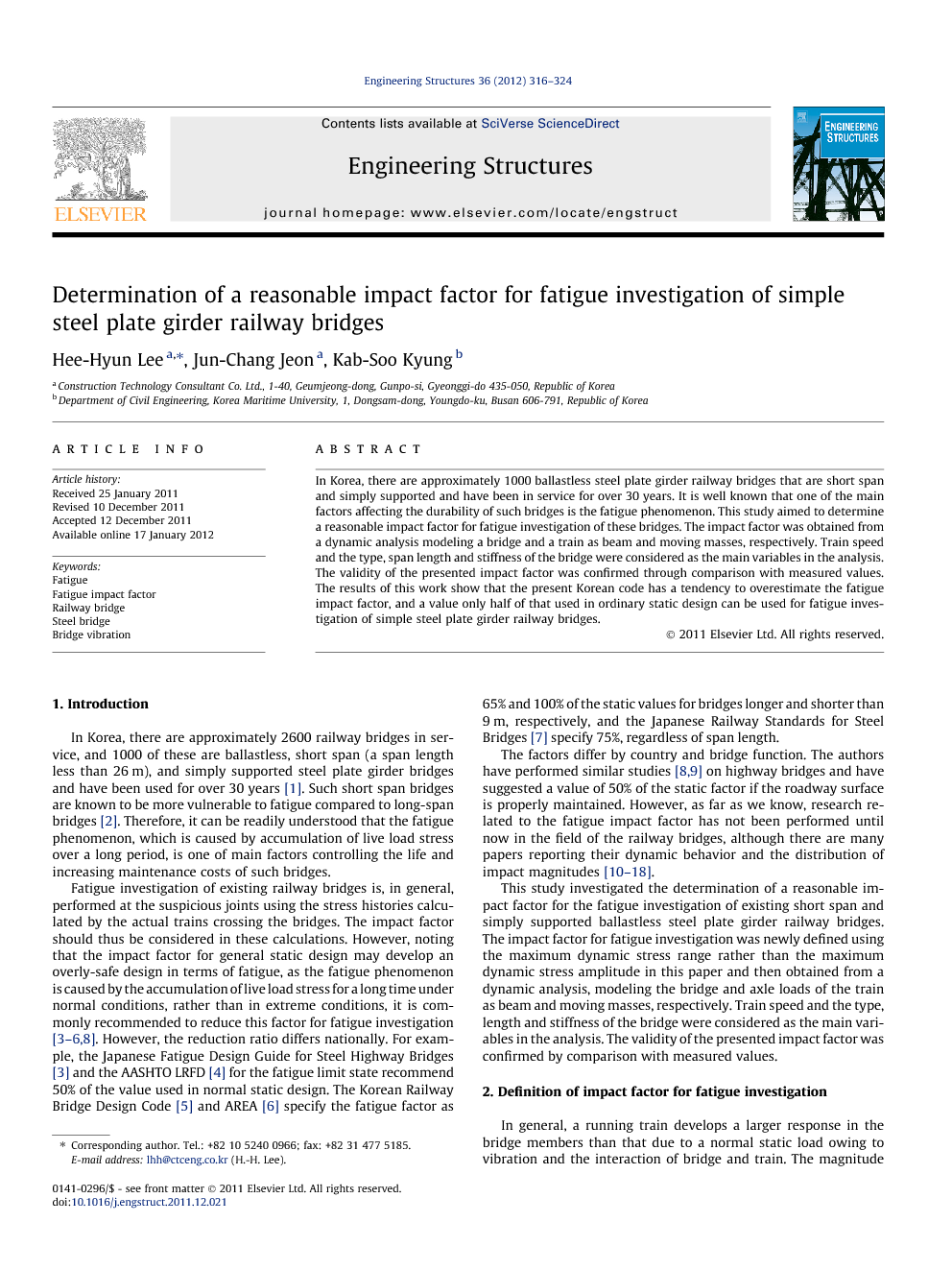 In Korea, there are approximately 1000 ballastless steel plate girder railway bridges that are short span and simply supported and have been in service for over 30 years. It is well known that one of the main factors affecting the durability of such bridges is the fatigue phenomenon. This study aimed to determine a reasonable impact factor for fatigue investigation of these bridges. The impact factor was obtained from a dynamic analysis modeling a bridge and a train as beam and moving masses, respectively. Train speed and the type, span length and stiffness of the bridge were considered as the main variables in the analysis. The validity of the presented impact factor was confirmed through comparison with measured values. The results of this work show that the present Korean code has a tendency to overestimate the fatigue impact factor, and a value only half of that used in ordinary static design can be used for fatigue investigation of simple steel plate girder railway bridges.

In Korea, there are approximately 2600 railway bridges in service, and 1000 of these are ballastless, short span (a span length less than 26 m), and simply supported steel plate girder bridges and have been used for over 30 years [1]. Such short span bridges are known to be more vulnerable to fatigue compared to long-span bridges [2]. Therefore, it can be readily understood that the fatigue phenomenon, which is caused by accumulation of live load stress over a long period, is one of main factors controlling the life and increasing maintenance costs of such bridges. Fatigue investigation of existing railway bridges is, in general, performed at the suspicious joints using the stress histories calculated by the actual trains crossing the bridges. The impact factor should thus be considered in these calculations. However, noting that the impact factor for general static design may develop an overly-safe design in terms of fatigue, as the fatigue phenomenon is caused by the accumulation of live load stress for a long time under normal conditions, rather than in extreme conditions, it is commonly recommended to reduce this factor for fatigue investigation [3], [4], [5], [6] and [8]. However, the reduction ratio differs nationally. For example, the Japanese Fatigue Design Guide for Steel Highway Bridges [3] and the AASHTO LRFD [4] for the fatigue limit state recommend 50% of the value used in normal static design. The Korean Railway Bridge Design Code [5] and AREA [6] specify the fatigue factor as 65% and 100% of the static values for bridges longer and shorter than 9 m, respectively, and the Japanese Railway Standards for Steel Bridges [7] specify 75%, regardless of span length. The factors differ by country and bridge function. The authors have performed similar studies [8] and [9] on highway bridges and have suggested a value of 50% of the static factor if the roadway surface is properly maintained. However, as far as we know, research related to the fatigue impact factor has not been performed until now in the field of the railway bridges, although there are many papers reporting their dynamic behavior and the distribution of impact magnitudes [10], [11], [12], [13], [14], [15], [16], [17] and [18]. This study investigated the determination of a reasonable impact factor for the fatigue investigation of existing short span and simply supported ballastless steel plate girder railway bridges. The impact factor for fatigue investigation was newly defined using the maximum dynamic stress range rather than the maximum dynamic stress amplitude in this paper and then obtained from a dynamic analysis, modeling the bridge and axle loads of the train as beam and moving masses, respectively. Train speed and the type, length and stiffness of the bridge were considered as the main variables in the analysis. The validity of the presented impact factor was confirmed by comparison with measured values.