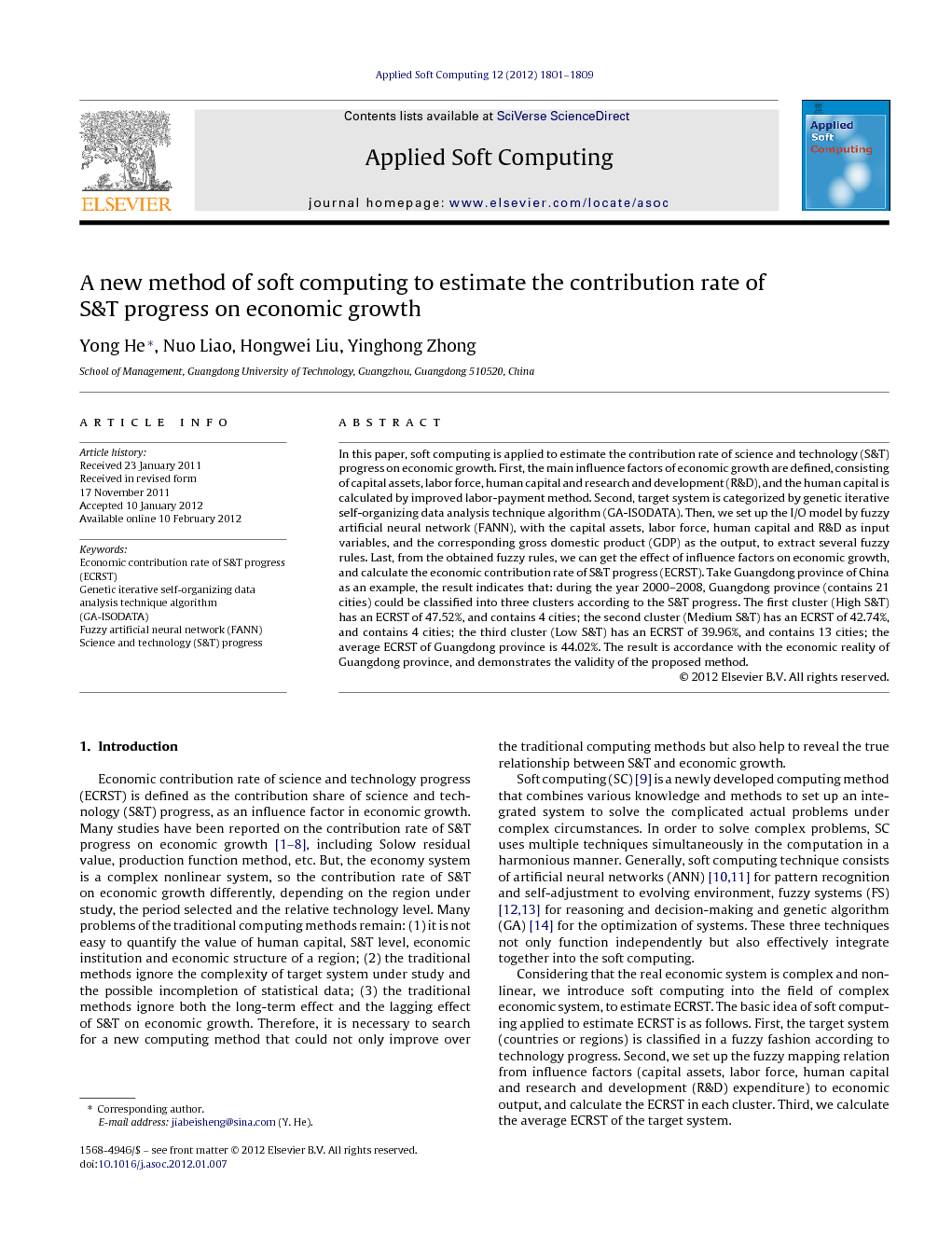 In this paper, soft computing is applied to estimate the contribution rate of science and technology (S&T) progress on economic growth. First, the main influence factors of economic growth are defined, consisting of capital assets, labor force, human capital and research and development (R&D), and the human capital is calculated by improved labor-payment method. Second, target system is categorized by genetic iterative self-organizing data analysis technique algorithm (GA-ISODATA). Then, we set up the I/O model by fuzzy artificial neural network (FANN), with the capital assets, labor force, human capital and R&D as input variables, and the corresponding gross domestic product (GDP) as the output, to extract several fuzzy rules. Last, from the obtained fuzzy rules, we can get the effect of influence factors on economic growth, and calculate the economic contribution rate of S&T progress (ECRST). Take Guangdong province of China as an example, the result indicates that: during the year 2000–2008, Guangdong province (contains 21 cities) could be classified into three clusters according to the S&T progress. The first cluster (High S&T) has an ECRST of 47.52%, and contains 4 cities; the second cluster (Medium S&T) has an ECRST of 42.74%, and contains 4 cities; the third cluster (Low S&T) has an ECRST of 39.96%, and contains 13 cities; the average ECRST of Guangdong province is 44.02%. The result is accordance with the economic reality of Guangdong province, and demonstrates the validity of the proposed method.

Economic contribution rate of science and technology progress (ECRST) is defined as the contribution share of science and technology (S&T) progress, as an influence factor in economic growth. Many studies have been reported on the contribution rate of S&T progress on economic growth [1], [2], [3], [4], [5], [6], [7] and [8], including Solow residual value, production function method, etc. But, the economy system is a complex nonlinear system, so the contribution rate of S&T on economic growth differently, depending on the region under study, the period selected and the relative technology level. Many problems of the traditional computing methods remain: (1) it is not easy to quantify the value of human capital, S&T level, economic institution and economic structure of a region; (2) the traditional methods ignore the complexity of target system under study and the possible incompletion of statistical data; (3) the traditional methods ignore both the long-term effect and the lagging effect of S&T on economic growth. Therefore, it is necessary to search for a new computing method that could not only improve over the traditional computing methods but also help to reveal the true relationship between S&T and economic growth. Soft computing (SC) [9] is a newly developed computing method that combines various knowledge and methods to set up an integrated system to solve the complicated actual problems under complex circumstances. In order to solve complex problems, SC uses multiple techniques simultaneously in the computation in a harmonious manner. Generally, soft computing technique consists of artificial neural networks (ANN) [10] and [11] for pattern recognition and self-adjustment to evolving environment, fuzzy systems (FS) [12] and [13] for reasoning and decision-making and genetic algorithm (GA) [14] for the optimization of systems. These three techniques not only function independently but also effectively integrate together into the soft computing. Considering that the real economic system is complex and nonlinear, we introduce soft computing into the field of complex economic system, to estimate ECRST. The basic idea of soft computing applied to estimate ECRST is as follows. First, the target system (countries or regions) is classified in a fuzzy fashion according to technology progress. Second, we set up the fuzzy mapping relation from influence factors (capital assets, labor force, human capital and research and development (R&D) expenditure) to economic output, and calculate the ECRST in each cluster. Third, we calculate the average ECRST of the target system. The reminder of this paper is organized as follows. In Section 2, we propose the genetic iterative self-organizing data analysis technique algorithm (GA-ISODATA), describe the fuzzy artificial neural network (FANN), and provide the procedure to estimate ECRST by GA-ISODATA and FANN. Section 3 is case study. We compute the ECRST of Guangdong province in China during the period of 2000–2008. Section 4 is conclusions.

This paper has presented a new approach of soft computing to compute the ECRST, and the contribution mainly includes as follows. (1) We classifies the influence factors of economic growth into three parts: the first is production factors, which contain capital assets and labor force; the second is S&T, measured by human capital and R&D expenditure; other comprehensive factors, including economic structure, economic institution and geographical advantages. (2) We propose the algorithm of GA-ISODATA which combines with GA and ISODATA. It could provide the optimal number of clusters and realize the best partitioning in complex economic system. GA-ISODATA could also be used in other classification problem. (3) Integrating with GA-ISODATA and FANN, a soft computing technique is proposed to estimate the contribution rate of S&T on economic growth. GA-ISODATA is used to partition the target system, FANN is used to set up the I/O model from influence factors to economic output, and the number of fuzzy rules in FANN is the optimal number of clusters in GA-ISODATA. Take Guangdong province of China as an example, the result indicates the effectiveness of the propose method to estimate the ECRST. Although much future research is needed to assess the utility of the new method in estimating the ECRST, this current work provides a novel approach in computing the contribution of S&T progress to economic growth.