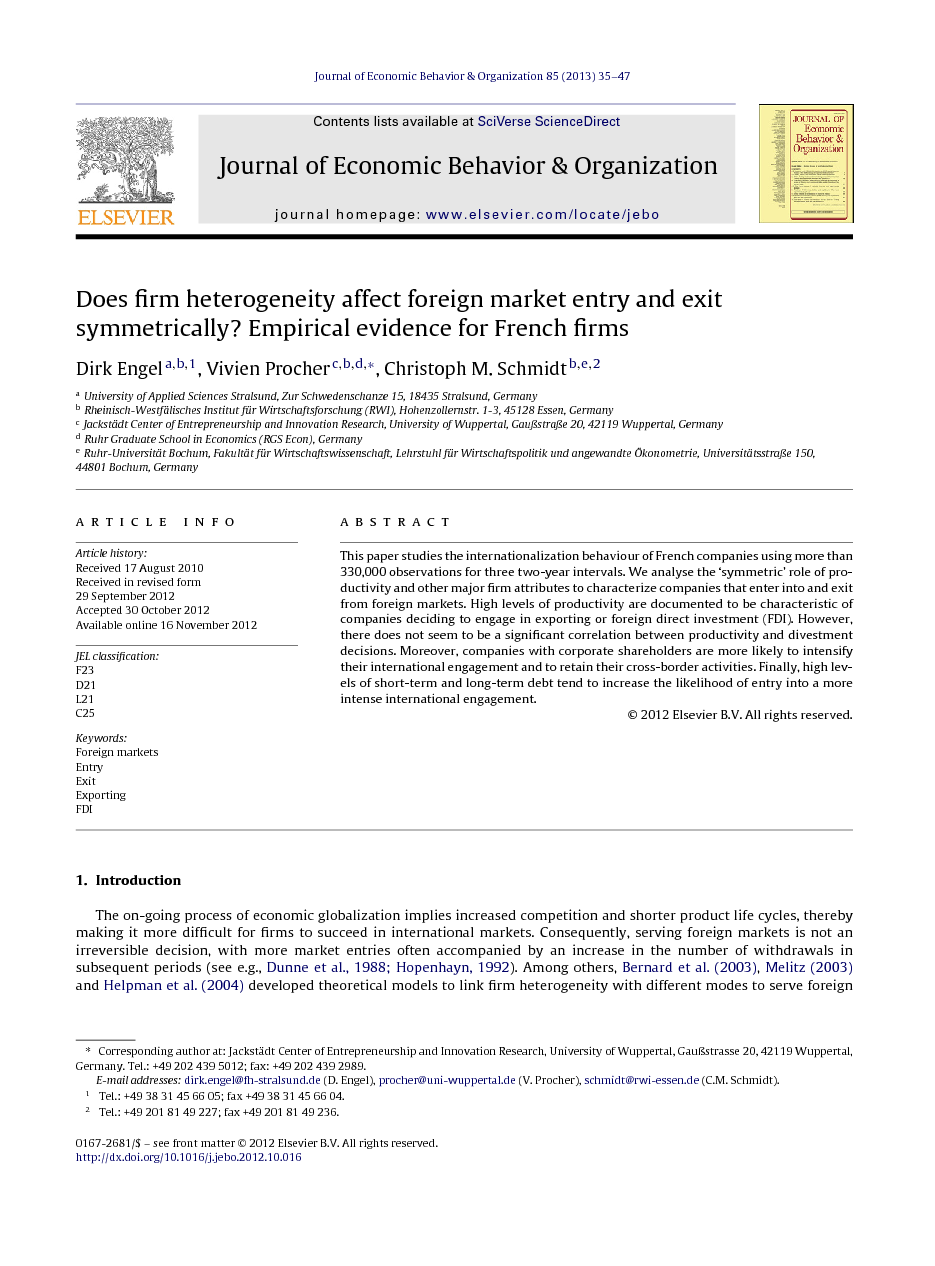 This paper studies the internationalization behaviour of French companies using more than 330,000 observations for three two-year intervals. We analyse the ‘symmetric’ role of productivity and other major firm attributes to characterize companies that enter into and exit from foreign markets. High levels of productivity are documented to be characteristic of companies deciding to engage in exporting or foreign direct investment (FDI). However, there does not seem to be a significant correlation between productivity and divestment decisions. Moreover, companies with corporate shareholders are more likely to intensify their international engagement and to retain their cross-border activities. Finally, high levels of short-term and long-term debt tend to increase the likelihood of entry into a more intense international engagement.

The on-going process of economic globalization implies increased competition and shorter product life cycles, thereby making it more difficult for firms to succeed in international markets. Consequently, serving foreign markets is not an irreversible decision, with more market entries often accompanied by an increase in the number of withdrawals in subsequent periods (see e.g., Dunne et al., 1988 and Hopenhayn, 1992). Among others, Bernard et al. (2003), Melitz (2003) and Helpman et al. (2004) developed theoretical models to link firm heterogeneity with different modes to serve foreign markets. A key prediction of all these contributions is a ‘symmetric pattern’ of productivity: More productive firms have a higher propensity to enter foreign markets as well as to continue foreign market activities. Most empirical articles have focussed on the determinants of foreign market entry (e.g., Bernard and Jensen, 1995 and Bernard and Wagner, 2001). In contrast, so far determinants of downward changes are analysed with respect to export activity by Wagner (2008) and Ilmakunnas and Nurmi (2010). Both papers show that firms realizing a productivity level below a certain threshold level will exit the market in the next period, whereas firms with productivity levels above this threshold will stay in the market. Thus, a symmetric pattern of productivity to explain foreign market participation by exporting is clearly confirmed. Since divestitures are quite common but mostly neglected by research (see Benito, 1997 and Benito, 2005 for further explanations), we know little about whether the symmetric pattern of productivity is also valid for serving the market by a foreign affiliate. In this paper we make a first attempt to answer this question empirically. For the purpose of comparing findings for exporting and investing abroad, we consider these two modes to serving foreign markets in our model. Furthermore we argue that the company network and strategic control is of far-reaching importance to assess entry and exit in foreign markets. A multi-unit firm with several domestic subsidiaries might find it easier to establish a foreign affiliate than a single-unit firm, whereas these specific network and learning effects might be less relevant for the export decision. With respect to market exit, the embeddedness in a company network spurs competition between affiliates, which in turn might increase the propensity for each affiliate to be divested. Here a firms’ network would influence entry and exit via foreign affiliates asymmetrically. These considerations suggest that the blanket assumption that major firm characteristics always exhibit a symmetric pattern across different modes of internationalization is unwarranted. Based on the existing literature and with specific reference to symmetry we derive assumptions on the potential influence of major characteristics for the internationalization of firms. Our hypotheses are tested empirically on the basis of a large sample of more than 335,000 observations for French firms from the manufacturing and service industries. Our data allows us to distinguish between three modes of internationalization – purely domestic activities, exporting and FDI – covering three two-year intervals 2000–2002, 2002–2004, and 2005–2007, respectively. We apply a time-pooled multinomial probit (MNP) model to estimate the upward and downward transition probabilities of companies across these three categories. From a theoretical point of view we have a two-stage decision process to serve foreign markets. At the first stage a firm makes the decision of going abroad, followed by choosing a specific destination in stage two. This paper clearly focuses on the decision at the first stage and the distinctive attributes of upward and downward changers, whereas Mayer et al. (2010) and Procher (2011) among others mainly address the role of firm and foreign market characteristics to explain the location choice. Our findings clearly show a symmetric pattern of productivity to explain the decision to start and to continue exporting. The mode of serving foreign markets through foreign affiliates is mostly characterized by an asymmetric pattern of firm's attributes. In line with existing studies, high-productive firms are more likely to invest abroad, however, firms with foreign affiliates do not exhibit significantly higher productivity levels than divesting enterprises. Moreover we detect a symmetric pattern of ownership. Companies with corporate shareholders achieve a significantly higher probability to enter and to stay in foreign markets. The remainder of the paper is organized as follows: drawing on various economic and business theories, Section 2 discusses the role of major determinants of firm's internationalization behaviour. Section 3 describes the data, the econometric approach and variables employed. Estimation results are presented and discussed in Section 4. Section 5 concludes. 2. Determinants of foreign market participation: a brief literature review Starting from the stylized fact that exporting firms are different from non-exporting firms (e.g., Bernard and Jensen, 1995), a rich body of theoretical and empirical contributions shed light on the relationship between the characteristics of the firm and firm's internationalization behaviour.

In this paper we analyse the internationalization behaviour of more than 300,000 French domestic companies, exporters and MNEs between 2000 and 2007. Our data indicate that a rather small but distinctive group of companies increase or decrease their international engagement. The transition probabilities to enter and exit foreign markets via exporting are much higher than for FDI. Yet, symmetries might exist for key company characteristics with respect to the internationalization decisions of firms. Overall, a symmetric pattern of firms’ attributes is mainly found for export starters and continuing exporters, whereas an asymmetric pattern dominates investment and divestment decisions. An exception is the role of firm age. The older the company, the larger is the propensity to start and continue foreign market activities with respect to both exporting and FDI. Relative to the central role of productivity we clearly detect a symmetric pattern for the export decision. High-productivity companies are more likely to start and continue exporting. Similarly, with the ownership structure being key for the internationalization strategy of a company, we find that firms with financial, domestic and/or foreign corporate shareholders are more likely to start and continue serving export markets. The FDI participation deserves a special focus as we notice that key determinants affect FDI and export decisions differently. For example, short-term liabilities reduce the propensity to invest abroad but have no effect on the propensity to start exporting. In line with economic theory and empirical findings, productivity enhances the likelihood of domestic companies and exporters to become engaged in FDI. However, productivity seems to have no significant effect on the divestment decision – neither on parent nor on subsidiary level. In particular, high levels of sunk cost, potential re-entry cost related to FDI and knowledge spillover from foreign affiliates to the parent company might prevent an immediate market exit even if MNEs or their affiliates are underperforming. Multi-unit and ownership characteristics impact the FDI decision asymmetrically: multi-unit firms and those with financial shareholders are more likely to become engaged in FDI. Nevertheless, these MNEs are also more likely to completely divest from abroad. In summary, our empirical findings suggest that entering and exiting foreign markets via exporting or FDI is determined by varying symmetry patterns depending on the specific mode and the influence of various firm characteristics. One potential path for future research could be to analyse incremental and intra-company network changes. MNEs, for example, extend their existing foreign network by an additional affiliate. Moreover, the divestment decision of a domestic subsidiary might be directly linked to the establishment of a foreign subsidiary. Thus, capturing those dynamic network effects could provide valuable information on firm's continuous internationalization decisions.