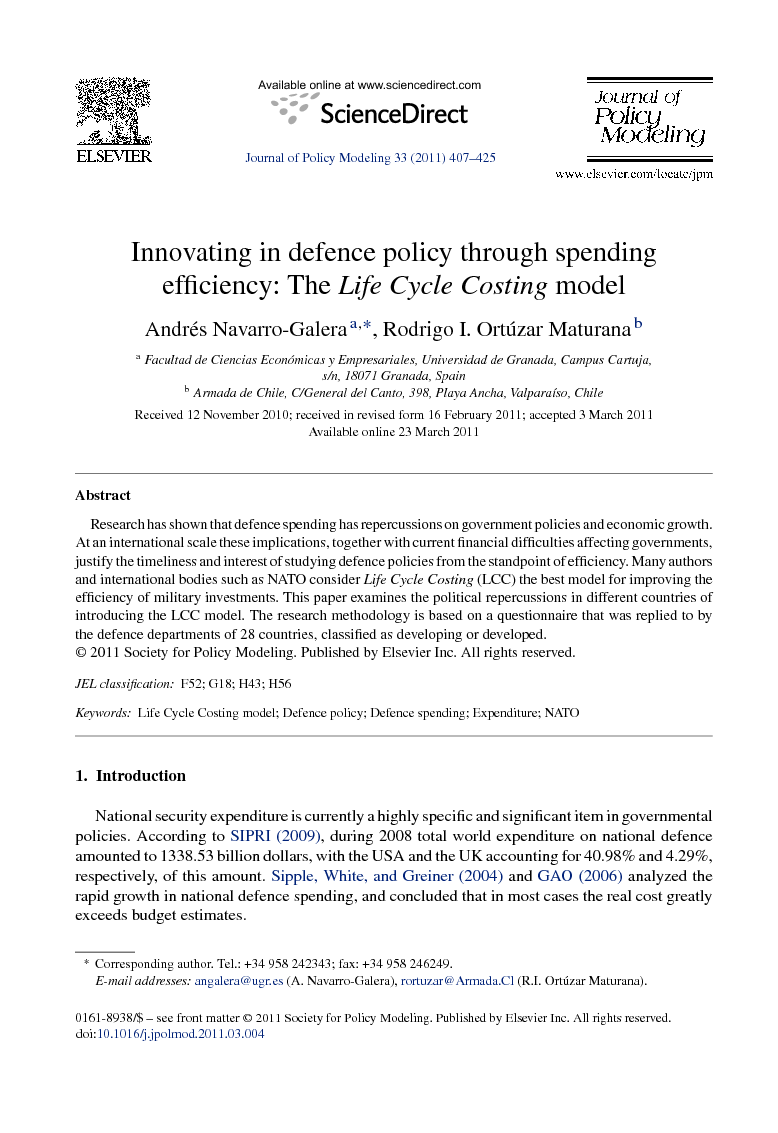 Research has shown that defence spending has repercussions on government policies and economic growth. At an international scale these implications, together with current financial difficulties affecting governments, justify the timeliness and interest of studying defence policies from the standpoint of efficiency. Many authors and international bodies such as NATO consider Life Cycle Costing (LCC) the best model for improving the efficiency of military investments. This paper examines the political repercussions in different countries of introducing the LCC model. The research methodology is based on a questionnaire that was replied to by the defence departments of 28 countries, classified as developing or developed.

National security expenditure is currently a highly specific and significant item in governmental policies. According to SIPRI (2009), during 2008 total world expenditure on national defence amounted to 1338.53 billion dollars, with the USA and the UK accounting for 40.98% and 4.29%, respectively, of this amount. Sipple, White, and Greiner (2004) and GAO (2006) analyzed the rapid growth in national defence spending, and concluded that in most cases the real cost greatly exceeds budget estimates. Various studies have been made of the relation between defence spending, economic growth and governmental policies, and have concluded that the effects of defence spending include the stimulation of aggregate demand, inflationary pressure and technological advance (Abu-Bader and Abu-Qarn, 2003, Dritsakis, 2004 and Kollias et al., 2004). Other authors have examined the implications of national defence spending in the EU, finding very diverse patterns among the (then) 15 Member States. For Dakurah, Davies, and Sampath (2001), policy implications can be derived from an understanding of the directions and magnitude of causality between military expenditure and economic growth. Accordingly, current trends in national military expenditure and its political and social repercussions, together with the financial difficulties currently facing governments, highlight the need to study national defence policies from the standpoint of efficiency in public expenditure, and to analyze techniques that may be useful for decision takers. In recent years, and in accordance with New Public Management theories ( Hood, 1991 and Hood, 1995), diverse methods for evaluating public spending have been implemented in administrative reforms in numerous countries, with the aim of reducing costs and increasing efficiency ( Haque, 2006, Kettl, 2006, Navarro et al., 2008 and Ortiz et al., 2006). With respect to national defence, the Life Cycle Costing (LCC) model is internationally considered the best methodology available for improving the efficiency of military equipment investments ( NATO, 2007 and NATO, 2009). Costs are reduced, and thus an informed investment decision may be taken based on the lowest possible consumption of resources. Waak (2004) identified cases in which support costs may be reduced by up to 50%, and according to Masiello (2002), the LCC model makes it possible to identify the most significant cost generators and thus achieve the best combination of resources employed. Ferrin and Plank (2002) concluded that LCC-based evaluation provides a more long-term view and thus facilitates a more soundly based assessment of acquisitions. A few countries have long implemented the LCC model for evaluating their military investments; such users include the UK, which established its own LCC stages based on the concept of “value for money” ( Hartley & Parker, 2003), Australia, which reoriented the economic evaluation of defence spending towards LCC ( ANAO, 1998), and the USA, where the concept of Total Ownership Cost ( Boudreau & Naegle, 2005) was introduced. Nevertheless, at the international level, theorists and senior military authorities agree that application of the LCC model requires appropriate regulatory development. According to Tysseland (2008), the inadequacy of the latter, in many countries, is one of the most severe deficiencies of their defence investment policies. As acknowledged by NATO, 2008 and NATO, 2009, there is widespread awareness of the issue of LCC, but no effective solutions have yet been established—which reflects the complexity, importance and timeliness of the question in terms of international policy making. Current applications are not always effective and few if any studies have been made to determine whether national standards for evaluating military spending satisfy the requirements of the LCC model. Hence the need for further research in this field. In this context, in the present paper we analyze the political implications of implementing the LCC model in defence investment programmes. Two fundamental research questions are addressed: (1) do current national regulations enable the systematic application of the LCC model? (2) If not, what public policies should be adopted so that its application may be viable? Accordingly, we first examine whether current national standards for evaluating military investments, as instruments of national defence policy, are appropriate, from a technical standpoint, for the LCC model to be applied. We study the strengths and weaknesses of such standards and, where appropriate, suggest improvements. Secondly, we analyze the differences between defence spending evaluation standards and practice in developed and in developing countries, in order to determine their deficiencies, areas for improvement, and the strategies that need to be followed in order to enable the successful introduction of the LCC model. Our findings show that current national regulations on the evaluation of military investments, as instruments of defence policy, do not enable the systematic application of the LCC model. The policy implications of these regulatory deficiencies mean that governments, especially in developing countries, need to reform their administrative systems for evaluating military spending, to reach agreements with other countries in this respect, to set adequate standards for making and confirming cost estimates, and to adopt measures to enhance transparency in investment decision making processes. The rest of this paper is organized as follows. The following section is dedicated to the conceptual framework of the LCC model, and Section 3 presents the results of a questionnaire addressed to the defence ministries of 64 countries in the Americas, Europe, Africa, the Middle East, Asia and Oceania. Finally, the findings of this empirical study are summarised in Section 4.