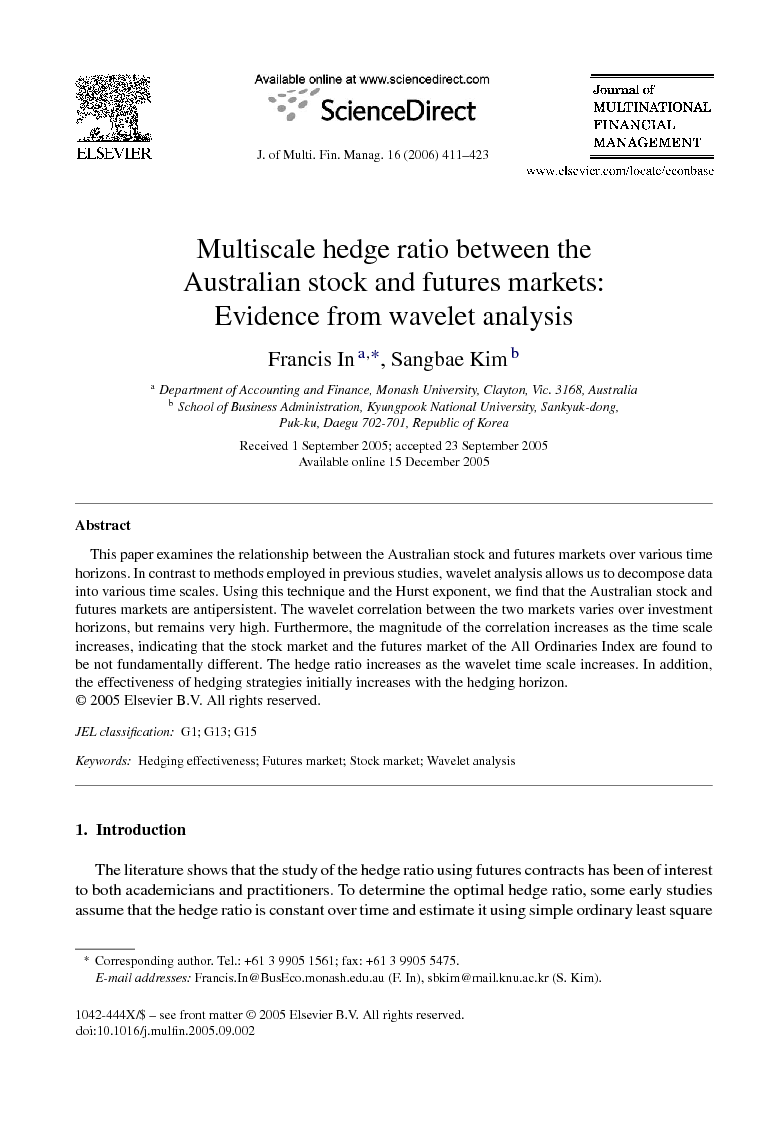 This paper examines the relationship between the Australian stock and futures markets over various time horizons. In contrast to methods employed in previous studies, wavelet analysis allows us to decompose data into various time scales. Using this technique and the Hurst exponent, we find that the Australian stock and futures markets are antipersistent. The wavelet correlation between the two markets varies over investment horizons, but remains very high. Furthermore, the magnitude of the correlation increases as the time scale increases, indicating that the stock market and the futures market of the All Ordinaries Index are found to be not fundamentally different. The hedge ratio increases as the wavelet time scale increases. In addition, the effectiveness of hedging strategies initially increases with the hedging horizon.

The literature shows that the study of the hedge ratio using futures contracts has been of interest to both academicians and practitioners. To determine the optimal hedge ratio, some early studies assume that the hedge ratio is constant over time and estimate it using simple ordinary least square estimation (see Ederington, 1979, Hill and Schneeweis, 1982 and Sener, 1998). However, given the time-varying nature of the covariance in many financial markets, the classical assumption of the time-invariant optimal hedge ratio appears inappropriate. An improvement has been made by adopting a bivariate GARCH framework (see Kroner and Sultan, 1993, Choudhry, 2003 and Wang and Low, 2003). Traders and investors working in the stock and futures markets have a different hedging period.1 Therefore, examining and applying the one-period hedge ratio could lead investors to invalid decision making. The previous literature has shown little attention to the multiscale hedge ratio, except for Howard and D’Antonio (1991), Lien and Luo, 1993 and Lien and Luo, 1994, Geppert (1995), and Lien and Wilson (2001). However, the models presented by these authors have at least three problems in estimating the multiscale hedge ratio. First, the ratio is an unreliable estimator due to the handful of independent observations generated from long-horizon return series (see Geppert, 1995). Second, computation is burdensome and difficult to calculate over longer investment horizons. Finally, it requires an assumption for the error term for GARCH/SV model estimation (see Lien and Wilson, 2001), which can cause inaccurate results. To overcome these problems, In and Kim (in press) recently proposed a new approach for investigating the relationship between the stock and futures markets using wavelet analysis. The main advantage of using wavelet analysis is the ability to decompose the financial data into several time scales (investment horizons).2 All market participants, such as regulators and speculative investors, who trade in the stock and futures markets make decisions over different time scales. The time frame over which they operate differs immensely, ranging from seconds to months and beyond. In fact, due to the different decision-making time scales among traders, the true dynamic structure of the relationship between the stock and futures markets itself will vary over the different time scales associated with those different horizons. Although it is logical to assume that there are several time periods in decision making, economic and financial analyses have been restricted to at most two time scales (the short run and the long run), due to the lack of analytical tools to decompose data into more than two time scales. Recently, several applications of wavelet analysis to economics and finance have been documented in the literature. To the best of our knowledge, applications in these fields include examination of foreign exchange data using waveform dictionaries (Ramsey and Zhang, 1997), decomposition of economic relationships of expenditure and income (Ramsey and Lampart, 1998a and Ramsey and Lampart, 1998b), the multihorizon Sharpe ratio (Kim and In, 2005a), systematic risk in a capital asset pricing model (Gençay et al., 2003), and examination of the relationship between stock returns and inflation (Kim and In, 2005b). In this paper, we investigate the relationship between the Australian stock and futures markets in terms of correlation and the hedge ratio over different time scales. Our main empirical results show that the correlation between the two markets varies over time, but remains very high. Furthermore, the magnitude of the correlation increases as the wavelet time scale increases, indicating that the stock market and the futures market are found to be not fundamentally different. The hedge ratio and the effectiveness of the hedging strategies also increase as the wavelet time scale increases. We finally confirm that the decomposition of the relationship between the stock and futures markets over the different scales using wavelets has important implications in studying correlation and the hedge ratio for portfolio management. We organize the rest of the paper as follows. Section 2 derives the minimum variance hedge ratio. In Section 3, wavelet analysis is described briefly. Section 4 discusses the data and the empirical results. In Section 5, concluding remarks are presented.

In this paper, we adopt wavelet analysis to investigate the relationship between the Australian stock and futures markets in various time scales. Wavelet analysis is undertaken using the Daubechies least asymmetric wavelet filter of length 8, and it supports three main conclusions. First, our results show that from the Hurst exponent (H), the Australian stock and futures markets are antipersistent. Overall, the wavelet variances show that the futures market is more volatile than the stock market, regardless of the time scale. Our results are largely consistent with those of Lee (1999) and In and Kim (in press). It is interesting to note that while the wavelet correlation between the two markets varies over time horizons, it remains very high, over 0.95 on average, which is slightly higher than the unconditional correlation (0.89). Furthermore, the magnitude of the correlation increases as the time scale increases, indicating that the stock and futures markets are found to be not fundamentally different (Lee, 1999). Second, using the multiscale hedge ratio, we find: (1) each hedging horizon has a unique hedge ratio, (2) the long-horizon hedge ratio converges to one, and (3) hedging effectiveness converges to one as the hedging horizon (wavelet time scale) increases. These results are consistent with the results of Low et al. (2002) on Nikkei Index futures. Finally, from in-sample and out-of-sample tests, it can be concluded that thewavelet multiscale hedge strategy is more effective than the other two hedge strategies: na¨ıve and OLS hedges, especially for multiscale analysis.