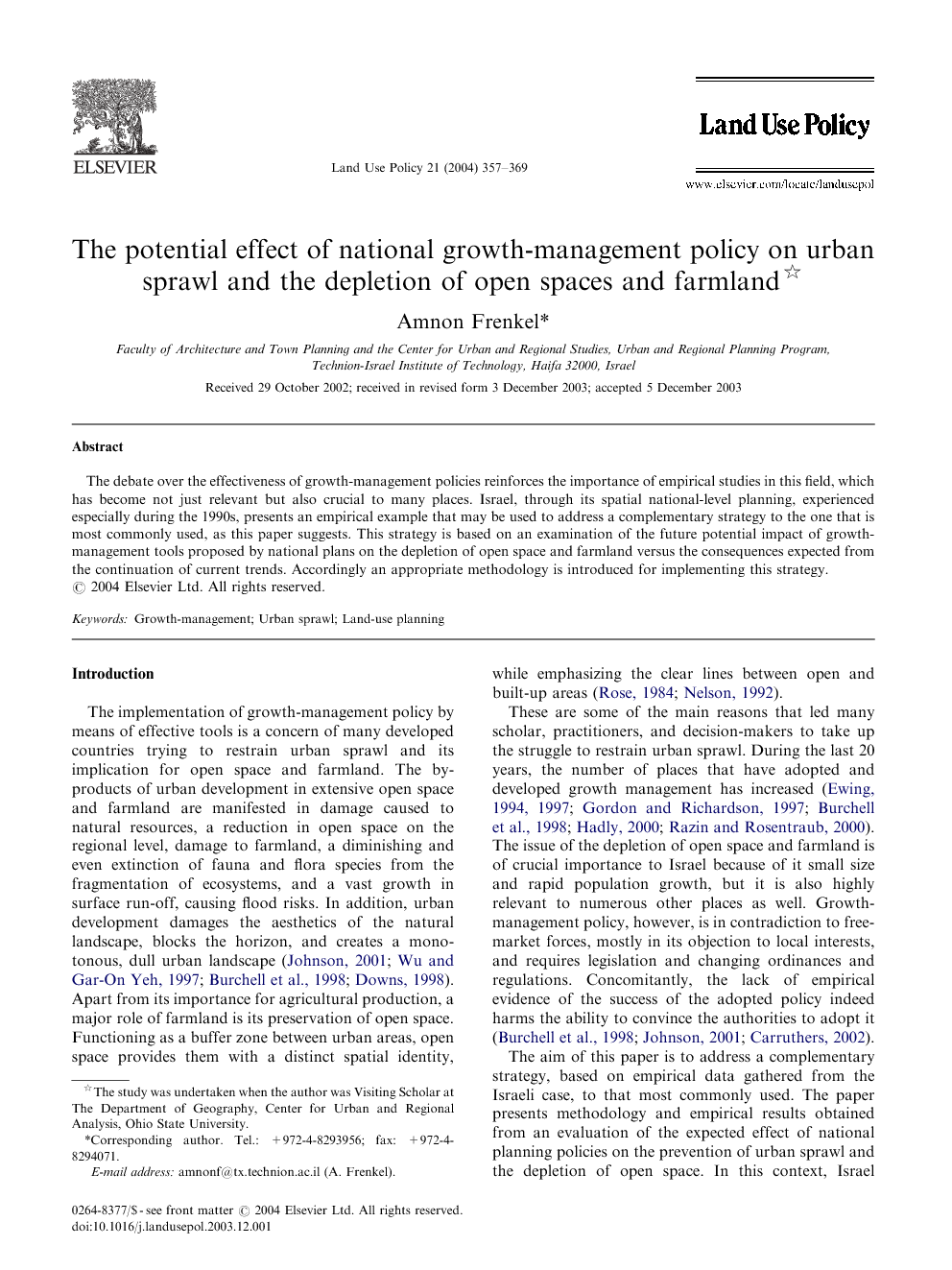 The debate over the effectiveness of growth-management policies reinforces the importance of empirical studies in this field, which has become not just relevant but also crucial to many places. Israel, through its spatial national-level planning, experienced especially during the 1990s, presents an empirical example that may be used to address a complementary strategy to the one that is most commonly used, as this paper suggests. This strategy is based on an examination of the future potential impact of growth-management tools proposed by national plans on the depletion of open space and farmland versus the consequences expected from the continuation of current trends. Accordingly an appropriate methodology is introduced for implementing this strategy.

The implementation of growth-management policy by means of effective tools is a concern of many developed countries trying to restrain urban sprawl and its implication for open space and farmland. The by-products of urban development in extensive open space and farmland are manifested in damage caused to natural resources, a reduction in open space on the regional level, damage to farmland, a diminishing and even extinction of fauna and flora species from the fragmentation of ecosystems, and a vast growth in surface run-off, causing flood risks. In addition, urban development damages the aesthetics of the natural landscape, blocks the horizon, and creates a monotonous, dull urban landscape (Johnson, 2001; Wu and Gar-On Yeh, 1997; Burchell et al., 1998; Downs, 1998). Apart from its importance for agricultural production, a major role of farmland is its preservation of open space. Functioning as a buffer zone between urban areas, open space provides them with a distinct spatial identity, while emphasizing the clear lines between open and built-up areas (Rose, 1984; Nelson, 1992). These are some of the main reasons that led many scholar, practitioners, and decision-makers to take up the struggle to restrain urban sprawl. During the last 20 years, the number of places that have adopted and developed growth management has increased (Ewing (1994) and Ewing (1997); Gordon and Richardson, 1997; Burchell et al., 1998; Hadly, 2000; Razin and Rosentraub, 2000). The issue of the depletion of open space and farmland is of crucial importance to Israel because of it small size and rapid population growth, but it is also highly relevant to numerous other places as well. Growth-management policy, however, is in contradiction to free-market forces, mostly in its objection to local interests, and requires legislation and changing ordinances and regulations. Concomitantly, the lack of empirical evidence of the success of the adopted policy indeed harms the ability to convince the authorities to adopt it (Burchell et al., 1998; Johnson, 2001; Carruthers, 2002). The aim of this paper is to address a complementary strategy, based on empirical data gathered from the Israeli case, to that most commonly used. The paper presents methodology and empirical results obtained from an evaluation of the expected effect of national planning policies on the prevention of urban sprawl and the depletion of open space. In this context, Israel provides an appropriate case through its spatial national-level planning, which actually took place during the 1990s. This evaluation is highly recommended for places that are considering adopting a growth-management policy. For them a quasi-experimental analysis of different scenarios that may occur in the future is of utmost importance in the evaluation process of the proposed policy under consideration.

The importance of empirical studies to the debate on the effectiveness of growth-management policies is clear and relevant to many places. The negative impacts ascribed to urban sprawl need scientific evidence and confirmation in order to clarify this controversial issue. Such evidence will assist in taking steps toward adopting a growth-management policy, thus contributing to the prevention of urban sprawl and the preservation of open space. Alongside the studies that have examined the rate of success and effectiveness of various policy tools activated in different places, this present study addresses a complementary strategy. Accordingly, a methodology is presented that is directed at examining the inherent future potential of growth-management policies set by the national plans in preventing urban sprawl and the conversion of open space into urban development uses. Using various forecasting tools, the methodology enables the testing of different scenarios. The results obtained provide decision-makers with fundamental information when formalizing development strategies for spatial development in the coming decades. The study addresses different and complementary indicators to those suggested by Nelson (1999) and Kline (2000) in their previous studies, thereby succeeding in measuring the potential effect of implementing the proposed growth-management policy. The findings pointed to the expected effect of employing different scenarios of spatial development on the continuation of urban sprawl and on the conservation of open space and farmland in Israel in the coming decades. The results obtained by the model predict a significant reduction of open space, particularly in the densely populated central regions of Israel. In these regions, it is of great importance to have a strict preservation policy to prevent the over-conversion of open space and farmland. It is particularly significant on the fringes of large metropolitan areas, which suffer the most from urban sprawl. Here it is expected that a substantial proportion of the open rural landscape will disappear because of heavy development pressures, most of which will come at the expense of farmland. Adopting a growth-management policy, as suggested by the national plans, could significantly reduce the depletion of open space and farmland, as shown by the results in this study, but only if this policy prove to be effective. The examination addressed here points to the great potential effectiveness of growth management in preventing urban sprawl by employing more compact urban development attached to existing development. The ratio of farmland per resident in Israel which is low, is expected to diminish further, by 50% in the coming decades, as a result of growing population trends and the need for additional land development. This consequence does not include additional effects that could result from the resultant insufficiency of the water supply. Therefore, the importance of implementing the proposed national policy is even greater. The indecisive discussions taking place in Israel today on the approval of the national plan (NOP/35) are similar to those occurring in other places and countries that are considering the implementation of policy tools in order to regulate spatial development. We expect that in the near future more places and countries will shift toward growth management in light of the outcomes from a laissez-faire attitude. Growth management ensures better, more efficient use of natural resources and the prevention of depletion. Its supporters must adopt different strategies to convince the authorities and decision-makers to act in favor of growth management, to the benefit of both the current and the future population. The results of this study could be used in the struggle to convince Israeli government agencies and planning authorities to approve and adopt the proposed national plan.