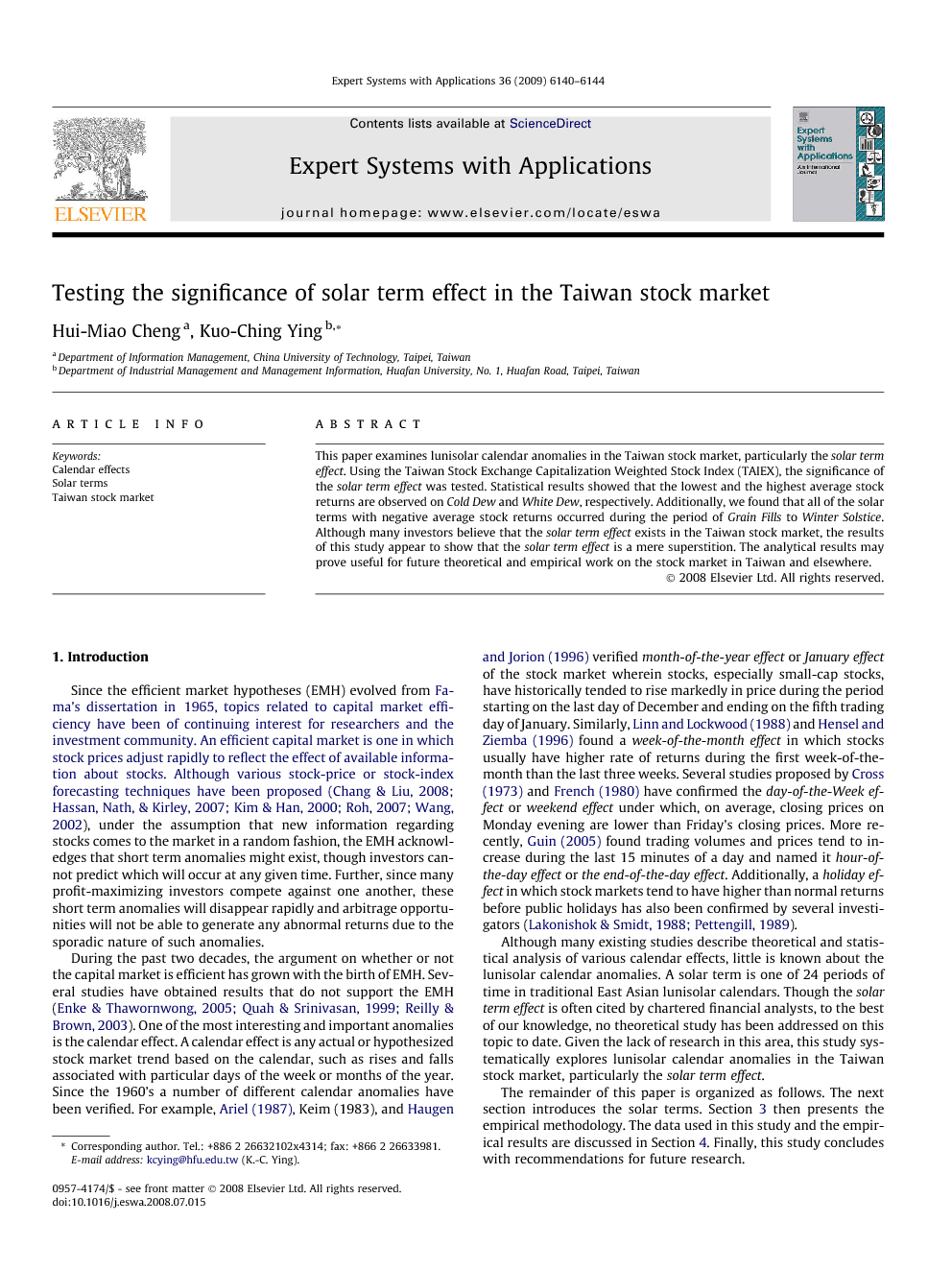 Since the efficient market hypotheses (EMH) evolved from Fama’s dissertation in 1965, topics related to capital market efficiency have been of continuing interest for researchers and the investment community. An efficient capital market is one in which stock prices adjust rapidly to reflect the effect of available information about stocks. Although various stock-price or stock-index forecasting techniques have been proposed (Chang and Liu, 2008, Hassan et al., 2007, Kim and Han, 2000, Roh, 2007 and Wang, 2002), under the assumption that new information regarding stocks comes to the market in a random fashion, the EMH acknowledges that short term anomalies might exist, though investors cannot predict which will occur at any given time. Further, since many profit-maximizing investors compete against one another, these short term anomalies will disappear rapidly and arbitrage opportunities will not be able to generate any abnormal returns due to the sporadic nature of such anomalies. During the past two decades, the argument on whether or not the capital market is efficient has grown with the birth of EMH. Several studies have obtained results that do not support the EMH (Enke and Thawornwong, 2005, Quah and Srinivasan, 1999 and Reilly and Brown, 2003). One of the most interesting and important anomalies is the calendar effect. A calendar effect is any actual or hypothesized stock market trend based on the calendar, such as rises and falls associated with particular days of the week or months of the year. Since the 1960’s a number of different calendar anomalies have been verified. For example, Ariel, 1987 and Keim, 1983, and Haugen and Jorion (1996) verified month-of-the-year effect or January effect of the stock market wherein stocks, especially small-cap stocks, have historically tended to rise markedly in price during the period starting on the last day of December and ending on the fifth trading day of January. Similarly, Linn and Lockwood (1988) and Hensel and Ziemba (1996) found a week-of-the-month effect in which stocks usually have higher rate of returns during the first week-of-the-month than the last three weeks. Several studies proposed by Cross (1973) and French (1980) have confirmed the day-of-the-Week effect or weekend effect under which, on average, closing prices on Monday evening are lower than Friday’s closing prices. More recently, Guin (2005) found trading volumes and prices tend to increase during the last 15 minutes of a day and named it hour-of-the-day effect or the end-of-the-day effect. Additionally, a holiday effect in which stock markets tend to have higher than normal returns before public holidays has also been confirmed by several investigators ( Lakonishok and Smidt, 1988 and Pettengill, 1989). Although many existing studies describe theoretical and statistical analysis of various calendar effects, little is known about the lunisolar calendar anomalies. A solar term is one of 24 periods of time in traditional East Asian lunisolar calendars. Though the solar term effect is often cited by chartered financial analysts, to the best of our knowledge, no theoretical study has been addressed on this topic to date. Given the lack of research in this area, this study systematically explores lunisolar calendar anomalies in the Taiwan stock market, particularly the solar term effect. The remainder of this paper is organized as follows. The next section introduces the solar terms. Section 3 then presents the empirical methodology. The data used in this study and the empirical results are discussed in Section 4. Finally, this study concludes with recommendations for future research.