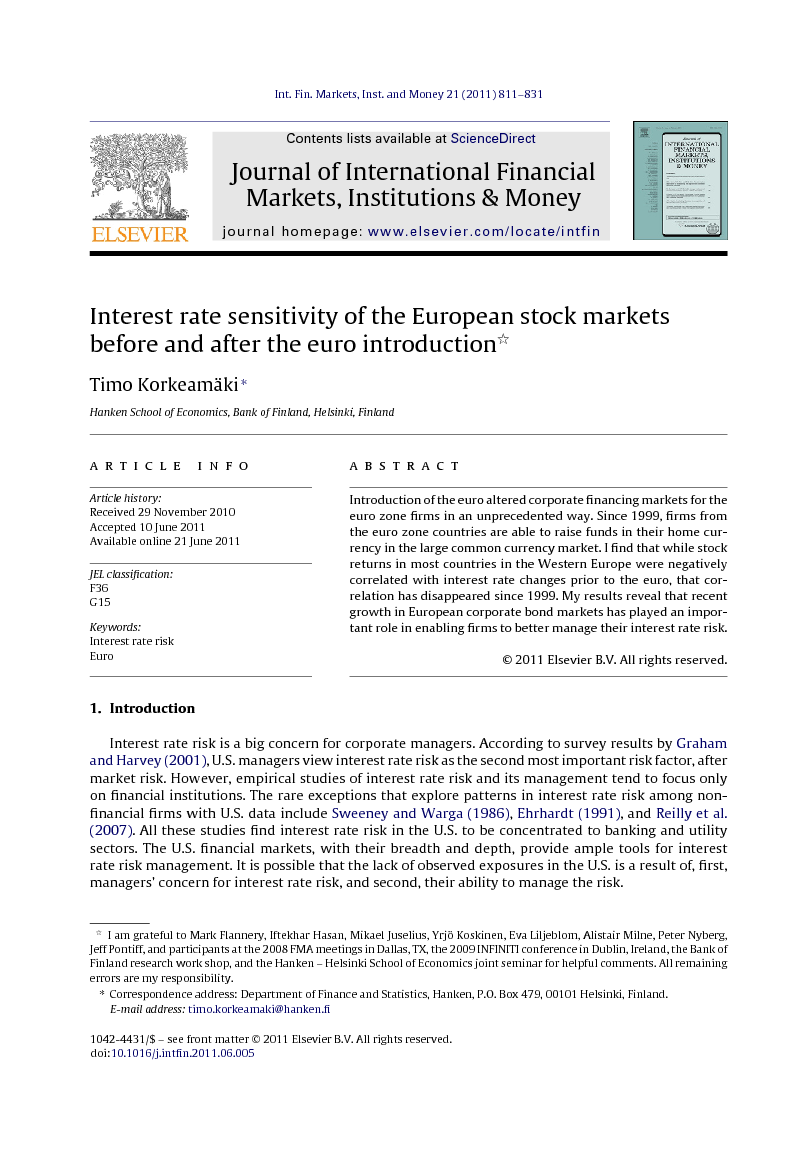 Introduction of the euro altered corporate financing markets for the euro zone firms in an unprecedented way. Since 1999, firms from the euro zone countries are able to raise funds in their home currency in the large common currency market. I find that while stock returns in most countries in the Western Europe were negatively correlated with interest rate changes prior to the euro, that correlation has disappeared since 1999. My results reveal that recent growth in European corporate bond markets has played an important role in enabling firms to better manage their interest rate risk.

Interest rate risk is a big concern for corporate managers. According to survey results by Graham and Harvey (2001), U.S. managers view interest rate risk as the second most important risk factor, after market risk. However, empirical studies of interest rate risk and its management tend to focus only on financial institutions. The rare exceptions that explore patterns in interest rate risk among non-financial firms with U.S. data include Sweeney and Warga (1986), Ehrhardt (1991), and Reilly et al. (2007). All these studies find interest rate risk in the U.S. to be concentrated to banking and utility sectors. The U.S. financial markets, with their breadth and depth, provide ample tools for interest rate risk management. It is possible that the lack of observed exposures in the U.S. is a result of, first, managers’ concern for interest rate risk, and second, their ability to manage the risk. In the 1990s, European corporate bond markets were still very limited in size and scope. Especially for smaller firms, the access to credit in the 1990s was limited to bank lending, primarily in floating rates, and with a limited choice of contract terms. Moreover, the corporate fixed income markets that did exist were limited to few currencies, so that for firms from most European countries, bond issuance would also result in foreign exchange risk considerations. Especially smaller euro countries had such small domestic financial markets prior to the euro that firms from those countries were often forced to choose between bank loans or bonds in foreign denominations. The spectrum of European corporate debt issuers has widened significantly since 1999 with smaller and more risky firms entering the market (Rajan and Zingales, 2003 and Pagano and von Thadden, 2004). Pagano and von Thadden (2004) speculate that the effect that growing credit markets have on corporate financial management in Europe may become the most lasting legacy of the European market integration. Past evidence suggests that European firms are either reluctant or unable to manage their interest rate risk to the same extent as their U.S. counterparts. For example, a recent study by Bartram et al. (2009) shows that while in the U.S., 37.7% of the firms used FX derivatives and 40.4% of them used interest rate derivatives, the corresponding figures for Germany were 39.2% (FX derivatives) and 24.2% (interest rate derivatives). For the entire Europe, FX hedging was more common than in the U.S. (50.9%), but much fewer firms hedged their interest rate exposures (32.4%).1 Data from the Bank of International Settlements (BIS) indicate that euro-denominated interest rate derivative markets have grown very rapidly since the beginning of 1999.2 The growth in derivative markets, paired with the expansion of public corporate bond markets, has improved firms’ ability to manage interest rate risk significantly. The effect is likely to be largest for firms from small euro countries such as Finland, where the firms’ ability to hedge interest rate risk in the home currency was very limited prior to the euro introduction. I study interest rate sensitivity in the 11 countries that originally adopted the euro in January, 1999. The effects of the evolving market for interest rate risk management may be shared by the EU countries that elected not to adopt the euro, and also by non-EU countries in the region. For that reason, I include Denmark, Sweden, the U.K., Norway, and Switzerland in my sample. As my primary variables, I use monthly data on the MSCI country indices to measure country-specific stock returns in each country, and the 3-month interbank interest rates to capture variation in interest rates. The country-level data are a natural choice, as the effect of transformation from legacy currencies to the common currency is country-specific, and might affect different countries differently. At the same time, the choice of MSCI country indices may introduce a bias against findings, as those indices are value-based, putting more emphasis on the largest firms from each country. One can argue that those firms were able to access global financial markets already prior to the euro. My results indicate a negative and significant relation between interest rate changes and stock returns in the pre-euro era for most of the EU countries. Notable exceptions include Germany, and France. Coincidentally, more developed fixed income and interest rate markets in the Deutsch Mark and the French Franc existed already in the 1990s. In the time period after 1998, the inverse relationship between interest rates and stock market returns has disappeared for all sample countries. I further find that the local interest rate risk among the sample countries is a priced factor for global investors. Rajan and Zingales (2003) view financial integration within the euro zone as an evolving process. As I explore the determinants of interest rate sensitivity further, I find that in the cross-section of countries, gradual growth in corporate bond markets tends to reduce the negative correlation between interest rates and stock returns, after controlling for various interest rate environment variables, country-specific variables, and even the euro introduction itself. This finding suggests that increased depth in corporate bond markets allows firms to better manage their interest rate exposures. The rest of the paper is structured as follows. Section 2 provides a short background on the euro introduction and empirical findings on its effects. The theoretical connections between interest rate fluctuation and stock returns are discussed there. Section 3 introduces the data sources used in this study, and Section 4 discusses different methods to measure interest rate sensitivity. Section 5 presents the main results of this study, while Section 6 concludes.

I study interest rate exposure of the European stock markets before and after the introduction of the euro. My main finding is that while a negative correlation between stock market returns and interest rates was common among EMU countries prior to 1999, none of them exhibits a negative interest rate exposure in the post-euro era. This pattern is also shared by the EU countries that have elected to stay outside the monetary union. My evidence also suggests that interest rate risk is priced, but only in the time period after the euro introduction. The reduction in interest rate risk coincides with a significant growth in fixed income related markets that has been attributed to the introduction of the euro (Rajan and Zingales, 2003), and it is consistent with the suggestion that deeper markets in the home-currency interest rates allow firms to better manage their interest rate exposures. This notion receives further support as many of the countries that exhibit the shift in interest rate sensitivity are countries where the local corporate bond markets were very small prior to the euro. As such, my results suggest that the euro is having an intended consequence on firm's financing, as market depth and the consequently increased market completeness were among the proposed benefits of the common currency in the pre-euro era.