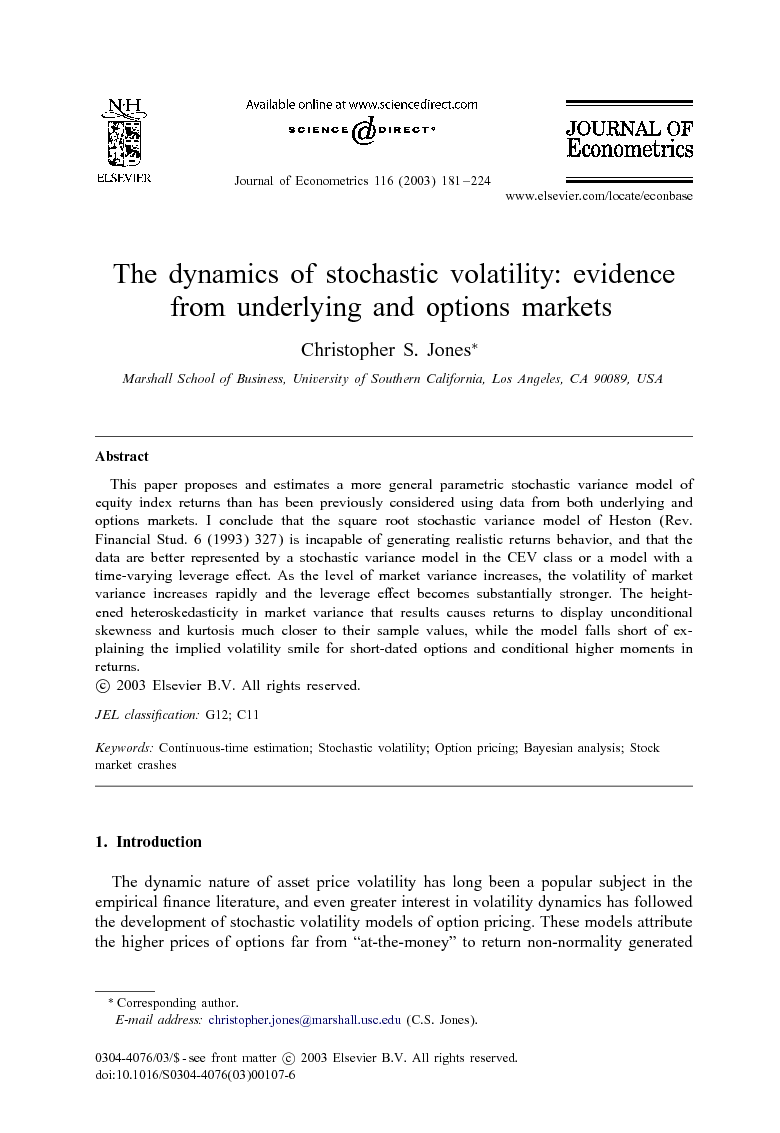 This paper proposes and estimates a more general parametric stochastic variance model of equity index returns than has been previously considered using data from both underlying and options markets. I conclude that the square root stochastic variance model of Heston (Rev. Financial Stud. 6 (1993) 327) is incapable of generating realistic returns behavior, and that the data are better represented by a stochastic variance model in the CEV class or a model with a time-varying leverage effect. As the level of market variance increases, the volatility of market variance increases rapidly and the leverage effect becomes substantially stronger. The heightened heteroskedasticity in market variance that results causes returns to display unconditional skewness and kurtosis much closer to their sample values, while the model falls short of explaining the implied volatility smile for short-dated options and conditional higher moments in returns.

The dynamic nature of asset price volatility has long been a popular subject in the empirical finance literature, and even greater interest in volatility dynamics has followed the development of stochastic volatility models of option pricing. These models attribute the higher prices of options far from “at-the-money” to return non-normality generated by time-varying volatility. Because much of the interest in options focuses on the options that are furthest from at-the-money and therefore have positive payoffs only in extremely rare circumstances, precise characterizations of volatility dynamics are particularly important. While the need to better model extreme events for the purposes of option pricing made the task of understanding volatility more exacting, the existence of options has made the researcher's data set much richer, so that more finely tuned models may be investigated with greater hope of obtaining accurate results. Traditionally, volatility dynamics in asset prices have been explored using the time series of returns on the assets being studied. Following the work of Engle (1982) and Bollerslev (1986), models in the ARCH class have been studied extensively for this purpose and remain popular today. Perhaps because of the rapid growth in derivatives markets, continuous-time stochastic volatility models have recently become popular as well, and a growing body of research is concerned with fitting these models to asset returns. Two recent examples are the papers by Gallant and Tauchen (1997) and Andersen et al. (2002). An alternative approach is to infer the risk-neutralized volatility dynamics from the prices of options. While methods of inferring risk-neutral returns probabilities from the cross section of options prices are well-known following the seminal work of Breeden and Litzenberger (1978), more recent studies such as Bates (2000) and Bakshi et al. (1997) fit parametric stochastic volatility models to option prices to learn about the parameters of these models. But since the risk-neutral and objective measures are not wholly dissimilar, there must be an advantage to using both sets of data (the time series of the underlying's prices and the prices of options on it) to infer both measures simultaneously, a point made forcefully by Chernov and Ghysels (2000a). In addition, since it is the difference between the two measures that defines risk premia, it may further be advantageous to estimate the two measures together so that estimation errors relating to these differences can be treated in a sensible way. In fact, a number of recent papers have pursued this idea. Pan (2002), Poteshman (1998), and Chernov and Ghysels (2000a) all use some combination of a time series of the underlying price and one or more time series of liquid, short-term, near-the-money option prices to infer the dynamics of the underlying volatility process under both the objective and risk-neutral measures.1 In its use of option implied volatilities for the purpose of estimating more realistic volatility dynamics, the paper is related to a growing literature on alternative volatility proxies. The use of high-frequency realized volatilities (often calculated at 5-min intervals) is increasingly popular, pursued by Andersen and Bollerslev (1997) and Andersen et al. (2001) among many others. The range, or the high price minus the low price over some interval, has been employed recently by Gallant et al. (1999) and Alizadeh et al. (2001) for similar purposes. It is possible that implied volatility provides a proxy that is less noisy than the range and easier to work with than high-frequency realized volatility, although this paper provides no evidence for or against this conjecture. In this paper, I consider a more general form of the one-factor stochastic variance model than has been considered previously and estimate the model in a Bayesian framework from a bivariate time series of returns and option implied volatilities. The analysis results in parameter estimates for both the objective and risk-neutral processes. The results show that the model I propose generates more realistic dynamics for stochastic variance and for equity index returns than does the standard square root model used by Heston (1993) and many others. I find that as variance increases, its own volatility increases at an even faster rate. Furthermore, the so-called “leverage effect,” or the negative correlation between the price and instantaneous variance processes, becomes substantially stronger at higher levels of variance. A positive shock to market variance therefore increases the probability that market variance may grow even larger. The compound effect of several of these shocks can be large, and extreme returns may result. Because the price and variance processes are negatively correlated, particularly in high volatility states, this extreme return will more often than not be negative, frequently of a magnitude that the square root process is incapable of generating. I focus on the implications of these models for higher moments of asset returns, since many of the outstanding puzzles in options markets and other areas of empirical asset pricing depend crucially on violations of the normality of returns. I find a realistic degree of unconditional non-normality implied by the new models, while the higher moments generated by the square root model fall far short of the levels observed in actual data. When conditioned on a value for the market variance, very short-horizon returns have a distribution that is much closer to Gaussian. For a monthly horizon, however, the new models generate conditional distributions with fatter tails than even a stochastic volatility jump-diffusion estimated from a similar data set. Unfortunately, model-implied options prices, while greatly improved over the square root specification, still fail to match observed prices of short-dated options. Section 2 of this paper motivates the econometric specification and outlines a few of its properties. The estimation method used in the paper is described in Section 3. Section 4 contains the results, including parameter estimates and the models’ implications for higher moments and option prices. Section 5 summarizes and discusses the results.

As opposed to the GARCH literature on stock volatility, in which new models are primarily introduced to explain previously unnoticed features of price dynamics, the continuous-time literature has tended to favor models that generate closed form solutions for derivative prices. While such an emphasis is natural given the typical uses of these models, the inability of popular models to generate realistic price dynamics limits their usefulness. The models introduced in this paper have obvious advantages over the square root model of Heston (1993) and others. While the square root model does produce non-Gaussian returns, the skewness and kurtosis it generates are far too small to be consistent with equity index returns. The unconditional skewness and kurtosis generated by the CEV and 2GAM models matched the sample moments remarkably well, even those moments calculated from a sample that included the crash of 1987. It is notable that the model-implied moments reported were implied by parameters estimated over a sample that did not include that crash. The results therefore suggest that the patterns of returns and volatility in relatively calm markets can be informative about less benign states as well. In other words, we may not need to see a crash to know the probability with which one will occur. Unfortunately, while the option prices and volatility smiles generated by the CEV and 2GAM models are in many cases much more realistic that the prices implied by the square root model, they are still inconsistent with the volatility smile consistently observed in short-term equity index options. This suggests that while unconditional moments are well-described simply by modeling volatility as a more nonlinear process, conditional moments may not be. An analysis of conditional moments shows near-Gaussian behavior for all of the stochastic variance models, particularly at short horizons. Jumps, which substantially increase conditional non-normality, may therefore be an important component of returns, at least under the risk-neutral measure. The CEV and 2GAM models are also incapable of matching the time series behavior of the VIX index of implied volatility during the crash of 1987, although they offer tremendous improvement over models based on the square root variance process. One possible explanation is that the price of risk is misspecified. Another is that volatility itself might jump, an interesting idea introduced by Bates (2000) and Duffie et al. (2000) and carefully pursued by Eraker et al. (2003). A third is that volatility is better described by a two-factor model, which has been pursued by Alizadeh et al. (2001) and Chernov et al. (2003), among others. Although option prices and conditional moments remain somewhat of a puzzle, many other aspects of the data are less perplexing. The results of this paper suggest a simple link between the observed intertemporal patterns in volatility and the existence of very rare and very large market crashes. When volatility is low, it tends to stay low, sometimes over extremely long periods, since its drift is near zero and its own variance is small. When eventually there is a large positive shock to the volatility process, volatility itself rapidly becomes more volatile, and the probability of a larger subsequent rise in volatility increases dramatically. Successive positive shocks to volatility can therefore compound rapidly, and the eventual occurrence of such shocks makes the extreme return a rare but regular event. When the degree of negative correlation between prices and volatility increases, these extreme returns, more likely than not, are stock market crashes. Following the crash, these high volatility states tend to die out quickly because the mean reversion in volatility is itself volatility induced. While there remain unanswered questions regarding the correct specification of conditional moments, risk premia, and options pricing, the models developed here show clear potential as simple yet much more realistic generalizations of existing models. With the growing popularity of derivatives written on realized volatilities rather than prices, future work using these derivatives’ prices may provide a natural way to improve our understanding of volatility dynamics even further.