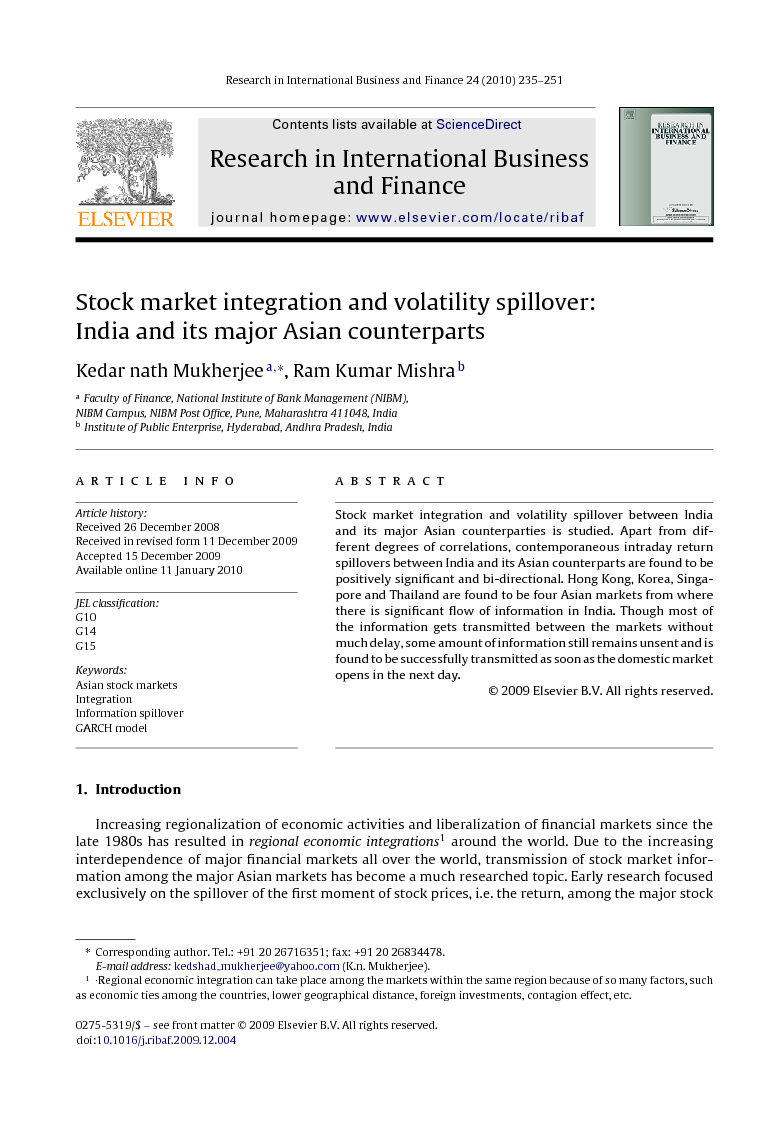 Stock market integration and volatility spillover between India and its major Asian counterparties is studied. Apart from different degrees of correlations, contemporaneous intraday return spillovers between India and its Asian counterparts are found to be positively significant and bi-directional. Hong Kong, Korea, Singapore and Thailand are found to be four Asian markets from where there is significant flow of information in India. Though most of the information gets transmitted between the markets without much delay, some amount of information still remains unsent and is found to be successfully transmitted as soon as the domestic market opens in the next day.

Increasing regionalization of economic activities and liberalization of financial markets since the late 1980s has resulted in regional economic integrations 1 around the world. Due to the increasing interdependence of major financial markets all over the world, transmission of stock market information among the major Asian markets has become a much researched topic. Early research focused exclusively on the spillover of the first moment of stock prices, i.e. the return, among the major stock exchanges ( Eun and Shim, 1989, Joen and Furstenberg, 1990 and Cumby, 1990). But, exploring the stock market co-movements is a combined study of information spillover both in terms of returns as well as the volatility of returns. Volatility linkages, i.e. inter-market linkages in the conditional second moments of stock price is another significant aspect of international financial relations. Several studies, such as ( Kyle, 1985) have pointed out that much of the information would be revealed in the volatility of stock prices, rather than the price itself. There are several reasons to analyze the cross-border volatility spillovers. In addition to various domestic factors, volatility of major foreign trading partners is one of the important determinants of stock return volatility in a domestic market. From the practitioners’ point of view, they are interested to analyze ‘volatility’ with a view to assess the risk associated with various financial assets (Merton, 1980) and to facilitate the valuation of different financial products along with the development of different hedging techniques (Ng, 2000). As far as academics are concerned, they believed that the changes in volatility reveal the arrival of new information (Ross, 1989). This paper attempts to investigate the first and second moment interactions among the Indian equity market with that of twelve other Asian countries. It is very well known that the volatility of stock return series is time varying, both intraday and across the days. In light of this fact, application of multiple regression analysis, granger causality test, vector auto regression (VAR)2 technique, etc., assuming time invariant conditional variances; to investigate the transmission of stock price movements may not cover all the aspects of the transmission mechanism. Therefore, this study has examined the transmission of the conditional first and second moments in the stock prices across the markets allowing for changing the variances. The generalized autoregressive conditional hetroscedasticity (GARCH) model introduced by Engle (1982) and Bollerslev (1986) has been used to account for the time-variant conditional variances. Our results, based on daily price observations from November 1997 to April 2008, ensures that apart from different degrees of correlations, both in terms of return and squared return series, among Indian stock market with that of other Asian countries, the contemporaneous intraday return spillover among India and almost all the sample countries are found to be positively significant and bi-directional where as the same in terms of volatility is basically unidirectional, i.e. either from other Asian markets to India or vice versa. As far as the lagged spillover of information is concerned, though most of the information gets transmitted between the markets without much delay, some amount of information, both in terms of return and volatility, still remains and is found to be successfully spilled over as soon as the domestic market opens in the next day. The rest of this paper is organized as follows: Section 2 presents a brief review of existing literature relevant to this study and pointed out the possible efforts achieved through this study. The details of data used are presented in Section 3. Section 4 gives a comprehensive description of the methods and the tests applied in this study. The analysis of major empirical findings is shown in Section 5, followed by the conclusion in Section 6.

By applying simple GARCH (1, 1) model with spillover variables on the intraday (both opening and closing) price index data over a period from November 1997 to April 2008, an effort has been made to investigate the stock market integration and volatility spillover among India and 12 other Asian markets. Spillover of information, both in terms of first and second moment of stock price, from the foreign market to the domestic market is tested not only during the same day, but also across the day. In other words, the present study investigates the return and volatility spillover among India and its major Asian counterparts during trading (without any time lag and with a time lag of one day) and non-trading (over the night) hours. The purpose here is to test the transmission of market information not only when the market is open, but also in the absence of any trading, i.e. over the night. Our study ensures that: • Apart from different degrees of correlation, there is a bi-directional contemporaneous intraday return spillover between India and most of its Asian counterparts. • Contemporaneous spillover of intraday volatility is stronger from other foreign markets to India, but not in the other way. • Unlike contemporaneous spillover, transmission of information lagged by one day, alternatively dynamic intraday spillover among India and its major Asian counterparts are not found to be stronger. • Hong Kong, Korea, Singapore and Thailand are found to be the four Asian markets from where there is a significant flow of market information to India. • Among others, stock markets in Pakistan and Sri Lanka are strongly influenced by the movements in the Indian stock market. • Unlike intraday information spillover among the markets, transmission of information over the night is not common between India and all of its sample Asian counterparts, but is more country specific, supported by both Correlation and GARCH results. • Though most of the information gets transmitted among the markets without much delay, some amount of information still remains and can be successfully transmitted as soon as the market opens the next day.