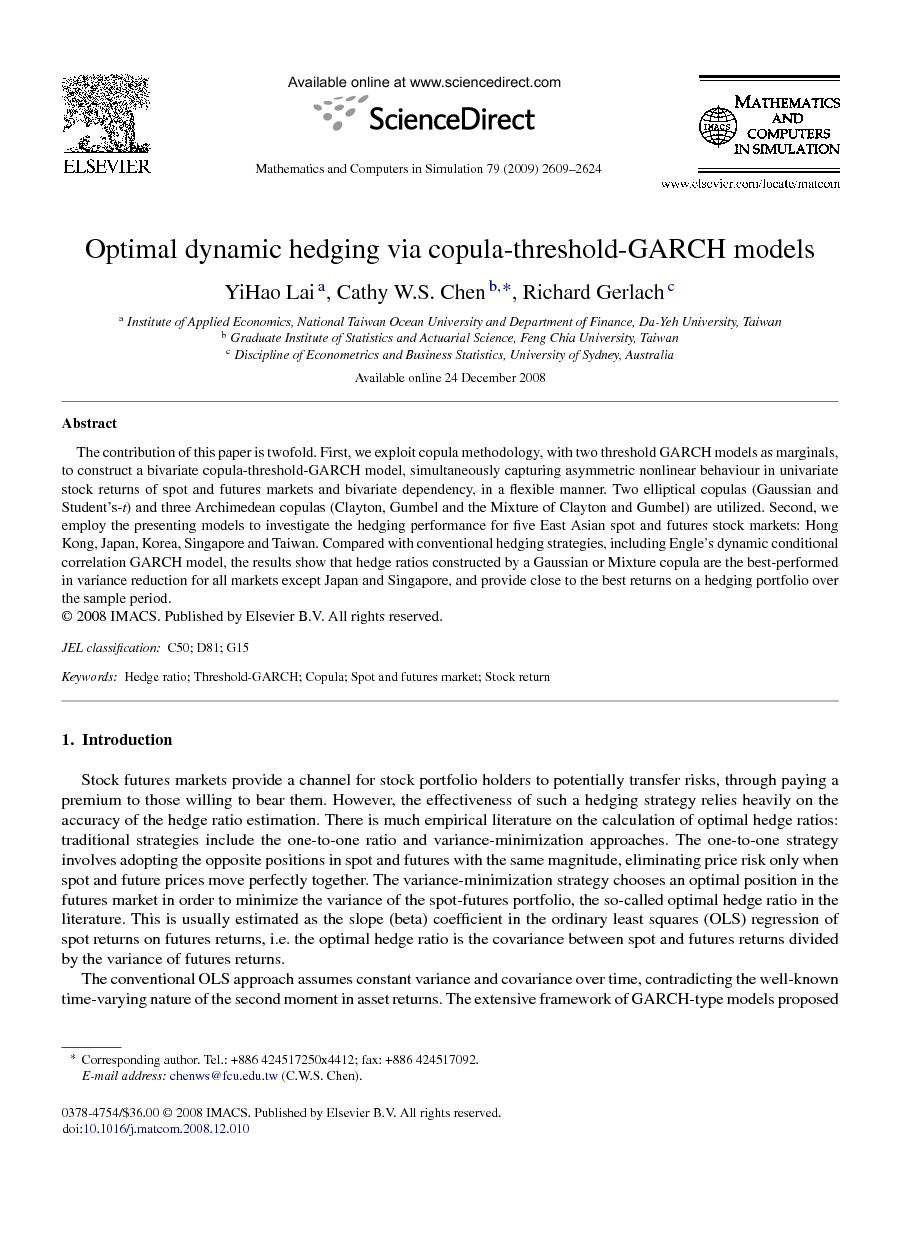 The contribution of this paper is twofold. First, we exploit copula methodology, with two threshold GARCH models as marginals, to construct a bivariate copula-threshold-GARCH model, simultaneously capturing asymmetric nonlinear behaviour in univariate stock returns of spot and futures markets and bivariate dependency, in a flexible manner. Two elliptical copulas (Gaussian and Student's-t) and three Archimedean copulas (Clayton, Gumbel and the Mixture of Clayton and Gumbel) are utilized. Second, we employ the presenting models to investigate the hedging performance for five East Asian spot and futures stock markets: Hong Kong, Japan, Korea, Singapore and Taiwan. Compared with conventional hedging strategies, including Engle's dynamic conditional correlation GARCH model, the results show that hedge ratios constructed by a Gaussian or Mixture copula are the best-performed in variance reduction for all markets except Japan and Singapore, and provide close to the best returns on a hedging portfolio over the sample period.

Stock futures markets provide a channel for stock portfolio holders to potentially transfer risks, through paying a premium to those willing to bear them. However, the effectiveness of such a hedging strategy relies heavily on the accuracy of the hedge ratio estimation. There is much empirical literature on the calculation of optimal hedge ratios: traditional strategies include the one-to-one ratio and variance-minimization approaches. The one-to-one strategy involves adopting the opposite positions in spot and futures with the same magnitude, eliminating price risk only when spot and future prices move perfectly together. The variance-minimization strategy chooses an optimal position in the futures market in order to minimize the variance of the spot-futures portfolio, the so-called optimal hedge ratio in the literature. This is usually estimated as the slope (beta) coefficient in the ordinary least squares (OLS) regression of spot returns on futures returns, i.e. the optimal hedge ratio is the covariance between spot and futures returns divided by the variance of futures returns. The conventional OLS approach assumes constant variance and covariance over time, contradicting the well-known time-varying nature of the second moment in asset returns. The extensive framework of GARCH-type models proposed by Engle [7] and Bollerslev [2] were designed to model this time-varying volatility structure. The general consensus is that time-varying hedge ratios built by bivariate GARCH-type models have superior performance in minimizing the portfolio volatility, e.g. see [16] and [19]. Sim and Zurbruegg [22] used a bivariate error-corrected GARCH model to investigate the dynamic hedging effectiveness in the South Korean stock futures, finding that the comparative performance of a constant hedge ratio, while being generally inferior, actually improved after the Asian financial crisis of 1997; Lien et al. [14] found the OLS hedge ratio outperformed the constant-correlation bivariate GARCH model; while Choudhry [5] showed that the time-varying hedge ratio performs better than the constant hedge ratio. The previous literature constructs the optimal hedge ratio via the covariance structure under a (dynamic) bivariate normal assumption, in particular neglecting the impact of a possibly non-normal bivariate dependence structure. This study considers the non-normality of stock returns and various dependence structures between spot and futures, and investigates the corresponding effects on hedge performance. Symmetric GARCH models do not capture the well-documented financial market trait of asymmetric volatility. To model asymmetric volatility, several specifications have been proposed: such as EGARCH [18] and GJR-GARCH [10]. Rabemananjara and Zakoian [21] developed a threshold-GARCH (TGARCH) model, allowing a nonlinear volatility reaction to positive and negative return shocks. Chan and McAleer [3] discuss estimation of a STAR-GARCH model, with a smooth transition nonlinear mean equation and symmetric GARCH errors. In this paper, we employ a nonlinear TGARCH model similar to that in [25], allowing asymmetric effects from past shocks to appear in the conditional variance equation. An important development in modeling conditional dependence, known as the copula, was first proposed by Sklar [23], stating that any N-dimensional joint distribution function may be decomposed into N marginal distributions and a copula function, that completely describes the dependence between the N variables. Various copula functions allow great flexibility in modeling joint distributions, beyond the typical bivariate Gaussian or bivariate t-distributions, since the marginals and the joint distribution in copula modeling do not necessarily belong to the same family. Copulas have become popular in the literature recently, e.g. see [9] and [17]. Patton [20] extends the standard copula concept to model time-varying conditional heteroskedasticity, using symmetric GARCH marginals in a copula-GARCH model. In this paper, the joint conditional density function for spot and futures returns is specified as the product of a conditional copula and the two marginal conditional densities, specified as TGARCH models with potentially different parameters and error distributions, thus extending Patton [20]. One of the advantages of copula-GARCH models in general is that we can describe different sorts of conditional dependency by changing the copula function, without altering the marginal densities of the TGARCH models. Like the dynamic conditional correlation (DCC) model of Engle [8], in this paper copula-TGARCH models are estimated using a two-step maximum likelihood approach, solving the dimensionality problem; see [13]. The goal of this paper is then to investigate and compare the performance of a range of copula and more conventional hedge strategies for the spot and futures stock prices from the East Asian markets in Hong Kong, Japan, Korea, Singapore and Taiwan. Our contribution aims at providing an outperforming and flexibly implemented time-varying hedge ratio, estimated by the copula-TGARCH model, as detailed in Section 2. The paper is organized as follows: Section 2 discusses the estimation methods for the models considered; optimal hedge ratios are derived in Section 3; Section 4 discusses the data, presents the empirical results and compares the hedge performance across the five markets; finally Section 5 concludes.

This paper employs a time-varying Copula-TGARCH model to evaluate the optimal hedge ratio for stock returns on spot and futures for five East Asian markets, from 1998 to 2005. Compared with the benchmarks of the un-hedged, one-to-one, OLS and DCC hedge ratios, we find that Copula-TGARCH time-varying hedge ratios are quite effective in reducing risks in portfolio returns. Therein, the Gaussian and Mixture copulas provide the best-performed hedge ratios for risk reduction for Hong Kong, Taiwan and Korea, implying copula hedge strategies are suitable for those volatile markets. For stable markets such as Japan and Singapore, complicated models such DCC and copula do not prove effective risk reducers compared with OLS, although these models did generate higher returns than OLS in these markets. Copula methodology is quite flexible to model the dependence between two markets or risk factors. One can further use different copula functions from the presenting paper to mimic the different dependence structures. As to the selection of a specific copula function in improving the hedging performance, more research is needed.