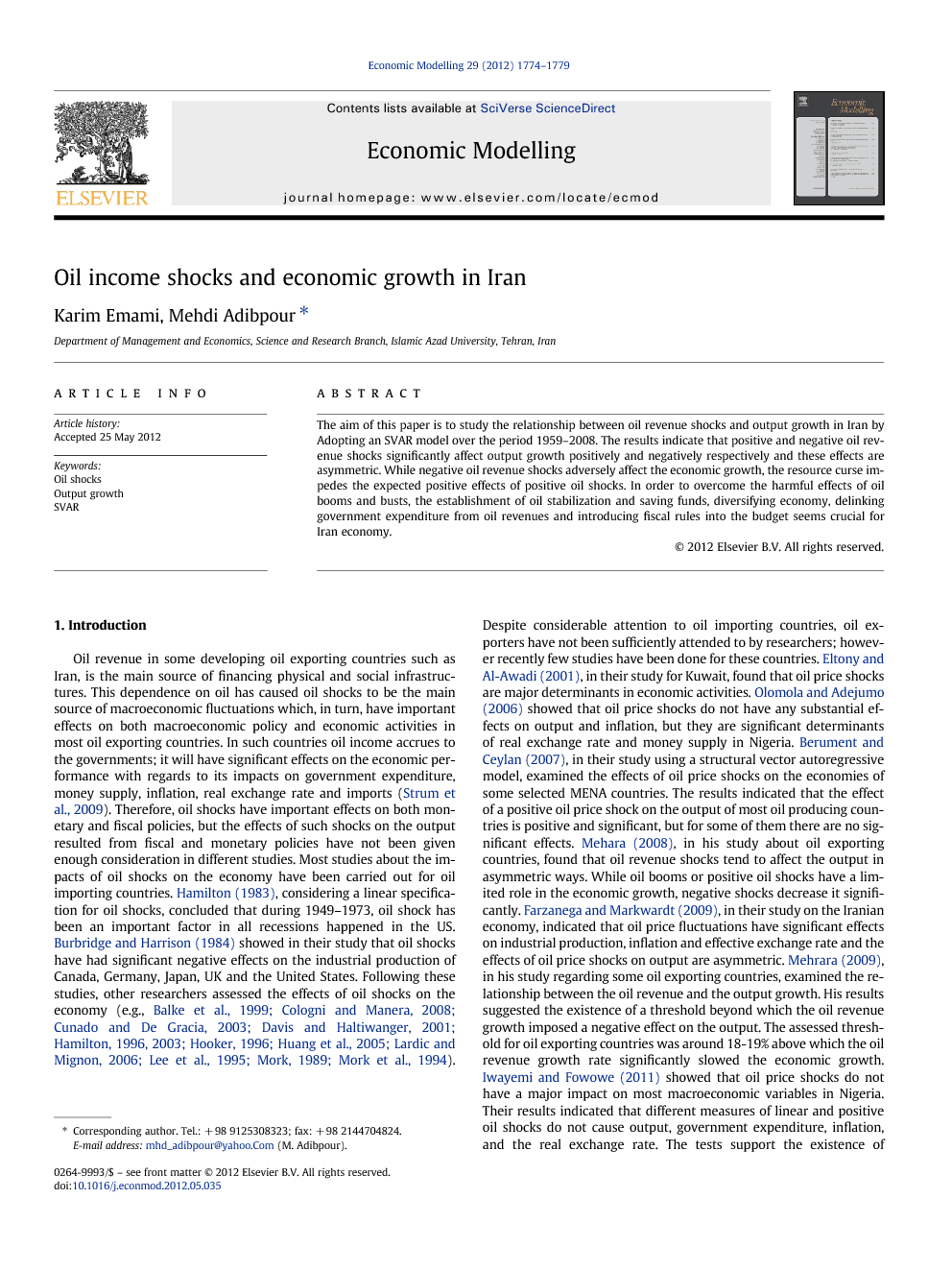 The aim of this paper is to study the relationship between oil revenue shocks and output growth in Iran by Adopting an SVAR model over the period 1959–2008. The results indicate that positive and negative oil revenue shocks significantly affect output growth positively and negatively respectively and these effects are asymmetric. While negative oil revenue shocks adversely affect the economic growth, the resource curse impedes the expected positive effects of positive oil shocks. In order to overcome the harmful effects of oil booms and busts, the establishment of oil stabilization and saving funds, diversifying economy, delinking government expenditure from oil revenues and introducing fiscal rules into the budget seems crucial for Iran economy.

Oil revenue in some developing oil exporting countries such as Iran, is the main source of financing physical and social infrastructures. This dependence on oil has caused oil shocks to be the main source of macroeconomic fluctuations which, in turn, have important effects on both macroeconomic policy and economic activities in most oil exporting countries. In such countries oil income accrues to the governments; it will have significant effects on the economic performance with regards to its impacts on government expenditure, money supply, inflation, real exchange rate and imports (Strum et al., 2009). Therefore, oil shocks have important effects on both monetary and fiscal policies, but the effects of such shocks on the output resulted from fiscal and monetary policies have not been given enough consideration in different studies. Most studies about the impacts of oil shocks on the economy have been carried out for oil importing countries. Hamilton (1983), considering a linear specification for oil shocks, concluded that during 1949–1973, oil shock has been an important factor in all recessions happened in the US. Burbridge and Harrison (1984) showed in their study that oil shocks have had significant negative effects on the industrial production of Canada, Germany, Japan, UK and the United States. Following these studies, other researchers assessed the effects of oil shocks on the economy (e.g., Balke et al., 1999, Cologni and Manera, 2008, Cunado and De Gracia, 2003, Davis and Haltiwanger, 2001, Hamilton, 1996, Hamilton, 2003, Hooker, 1996, Huang et al., 2005, Lardic and Mignon, 2006, Lee et al., 1995, Mork, 1989 and Mork et al., 1994). Despite considerable attention to oil importing countries, oil exporters have not been sufficiently attended to by researchers; however recently few studies have been done for these countries. Eltony and Al-Awadi (2001), in their study for Kuwait, found that oil price shocks are major determinants in economic activities. Olomola and Adejumo (2006) showed that oil price shocks do not have any substantial effects on output and inflation, but they are significant determinants of real exchange rate and money supply in Nigeria. Berument and Ceylan (2007), in their study using a structural vector autoregressive model, examined the effects of oil price shocks on the economies of some selected MENA countries. The results indicated that the effect of a positive oil price shock on the output of most oil producing countries is positive and significant, but for some of them there are no significant effects. Mehara (2008), in his study about oil exporting countries, found that oil revenue shocks tend to affect the output in asymmetric ways. While oil booms or positive oil shocks have a limited role in the economic growth, negative shocks decrease it significantly. Farzanega and Markwardt (2009), in their study on the Iranian economy, indicated that oil price fluctuations have significant effects on industrial production, inflation and effective exchange rate and the effects of oil price shocks on output are asymmetric. Mehrara (2009), in his study regarding some oil exporting countries, examined the relationship between the oil revenue and the output growth. His results suggested the existence of a threshold beyond which the oil revenue growth imposed a negative effect on the output. The assessed threshold for oil exporting countries was around 18-19% above which the oil revenue growth rate significantly slowed the economic growth. Iwayemi and Fowowe (2011) showed that oil price shocks do not have a major impact on most macroeconomic variables in Nigeria. Their results indicated that different measures of linear and positive oil shocks do not cause output, government expenditure, inflation, and the real exchange rate. The tests support the existence of asymmetric effects of oil price shocks because negative oil shocks can cause significant output and the real exchange rate. Cologni and Manera (2011) studied the effects of oil shocks and the expansionary fiscal policy on the business cycle of some major oil exporting countries using the Real Business Cycle (RBC) model. Results revealed that the expansion of government size can explain a considerable part of the negative effects of oil revenue shocks on the private sector. However, since the public sector growth is more than the private sector reduction, an increase in oil revenues will boost the total output. Nevertheless, the transmission mechanism of oil shocks in such countries has been less in focus of different studies. The aim of this study is to assess the impact of oil revenue shocks on the output by considering several channels through which the oil revenue shocks affect the economy of an oil exporting country. For this purpose, the effects of structural shocks on the output have been assessed using a Structural Vector Auto Regressive (SVAR) Model and impulse response functions. This paper has been structured as follows: Section 2 discusses some theoretical background, Section 3 presents the data and methodology, Section 4 provides some empirical results and, finally, Section 5 concludes the whole work.

The aim of this research was to study how output growth, government expenditure, money supply and real exchange rate respond to oil revenue shocks in Iran. By employing the SVAR Procedure and imposing over-identified restrictions, the coefficients of structural shocks were estimated. The results indicated that the impact of a positive oil revenue shock on output growth is positive while a negative one decreases output, and the effects of negative oil shock are greater than positive shocks. While positive oil shocks have limited impacts on stimulating output growth, negative ones deeply affect output growth. One possible explanation for these different effects is the resource curse. By increasing oil revenues, Dutch disease and volatility in public balances as our finding indicated, retard output performance. Our results conform to those of Mehara (2008), Mehrara, (2009) for some oil exporting countries; they also suggest that government expenditure and money supply have positive effects on output growth. Among factors affecting the economic growth, positive oil shocks have the least effect on output which confirms the resource curse hypothesis mentioned above. The impact of positive oil shocks on government expenditure and money supply is positive, but the effects of negative ones on both of them are negative. These results suggest that government expenditure and money supply -hence fiscal and monetary policies have high dependence on oil revenue shocks that are determined extremely exogenous, therefore these policies are passive in Iran's economy to a very great extent. In addition, positive oil shocks are the most important determinants of the real exchange rate; this agrees with Farzanega and Markwardt (2009) results. In some oil exporting countries, oil revenues without a stabilizing mechanism to cushion oil shocks, would expose the economy to booms and busts during oil revenues. In fact some oil exporting countries suffer from a weak and undiversified economy with a high dependency to oil revenues originated from abroad, and impose challenges such as volatility, uncertainty and exhaustibility. These challenges tend to be greater with a larger share of oil revenues in the government's budget. In order to minimize the harmful impacts of oil booms and busts, policy makers can practice institutional responses including the establishment of oil stabilization and saving funds. Other remedies are: diversifying the domestic economy, delinking government expenditure from oil revenues and introducing fiscal rules into the budget balance.