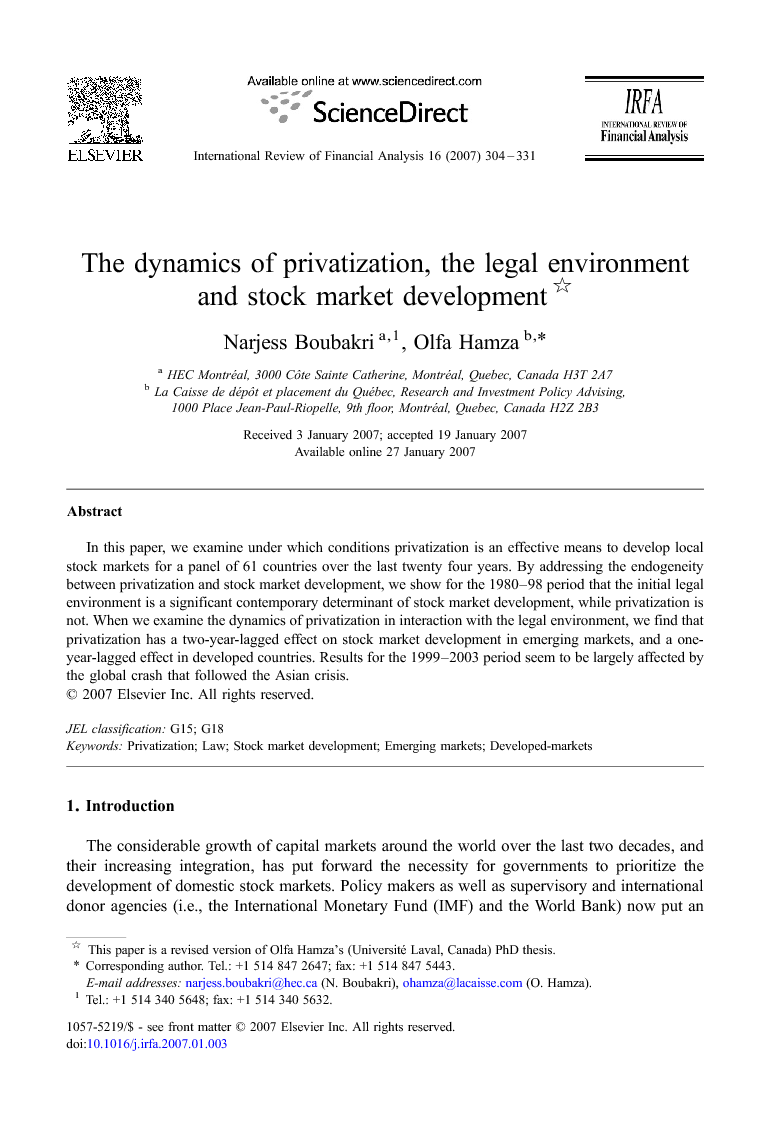 The considerable growth of capital markets around the world over the last two decades, and their increasing integration, has put forward the necessity for governments to prioritize the development of domestic stock markets. Policy makers as well as supervisory and international donor agencies (i.e., the International Monetary Fund (IMF) and the World Bank) now put an unprecedented emphasis on policies that aim to develop financial markets (World Bank, 2002 and World Bank, 2005), including privatization of state-owned firms. In this paper, we analyze the impact of privatization on stock market development in an international sample of developed and developing countries. Specifically, three main issues call for our attention: (1) first, does privatization has a contemporaneous effect on stock market development? To answer this question, we characterize privatization by its intensity and method (i.e., private sales to strategic investors or share issues on the stock market), and model the reform as endogenous to stock market development. (2) Second, does the level of institutional development affect the relation between privatization and stock market development? (3) Third, what are the dynamics of privatization? In other words, are the effects of the reform on stock market development contemporaneous or lagged in time? These issues are particularly important in a context where privatization is put in place worldwide, and which governments and politicians often justify by their desire to develop domestic stock markets and create popular capitalism. Our study makes several contributions to the literature: First, we address the endogeneity between privatization and stock market development (SMD henceforth) since recent studies show that the reform is unlikely to be exogenous (Bortolotti et al., 2003 and Megginson et al., 2004). Indeed, in most previous studies that examine the postprivatization performance of former state firms, SMD is implicitly assumed to be exogenous (Boubakri et al., 2005a, Boubakri et al., 2005b, D'Souza and Megginson, 1999 and Megginson et al., 1994) 2. Another contribution is that we use an international sample of 37 emerging markets and 24 developed countries, and employ a wide array of SMD indicators that characterize stock market size, liquidity and concentration, to tackle the conceptual shortcomings that each indicator may raise if it is taken separately, as it is done in the literature (Demirgüç-Kunt and Levine, 1996 and Demirgüç-Kunt and Levine, 1999). Finally, this paper also goes beyond the existing literature on the determinants of SMD in two ways: first, by including institutions that are directly related to stock market integrity, namely the extent of insider trading regulation and enforcement, and second, by considering the overall legal environment rather than political risk alone (Perotti & van Oijen, 2001). Our main results can be summarized as follows: We first show that privatization has no contemporaneous (i.e., simultaneous) impact on SMD. Next, when we examine the inter-temporal effect of privatization on SMD, we find that if the initial legal environment is efficient, the method of divestiture and the reform intensity have a more or less lagged effect, depending on the level of country economic development. For example, we find that in emerging markets the method of privatization (i.e. privatization through share issues) has a two-year-lagged effect while privatization intensity has a one-year effect on stock market size and liquidity. In developed countries instead, the method of privatization has no inter-temporal effect on SMD, but privatization intensity yields a one-year-lagged improvement in stock market size and liquidity. These benefits materialize in the presence of an initial legal environment. For both sub-samples of countries, the results also indicate, in line with La Porta et al., 1997 and La Porta et al., 1998, that the legal origin significantly affects the level of SMD. Specifically, markets in civil law countries are less developed than markets from common law countries. However, the quality of law enforcement (i.e., Law and Order) yields different results. Law and Order is significantly related to individual measures of SMD in emerging markets, but not in developed countries. We finally show that liberalization, which is often concomitant to privatization, is a positive and significant determinant of SMD. Overall, our results indicate that privatization is an important determinant of SMD, and that its impact depends on the initial level of legal environment and economic development. The benefits of privatization and the legal environment materialize as time goes by, especially in emerging markets where investors' confidence builds over a longer horizon compared to developed countries. This can be explained by the fact that the resolution of policy risk following privatization (Laeven and Perotti, 2002 and Perotti and van Oijen, 2001) and the process of promoting an equity culture (Boutchkova and Megginson, 2000 and Subrahmanyam and Titman, 1999) are gradual, and take more time in relatively more uncertain environments (i.e., emerging markets). The remainder of the paper is structured as follows. Section 1 reviews the literature on privatization and the determinants of SMD. Section 2 describes the sample and methodology, while Section 3 discusses the empirical results. We conclude in Section 4.

This study investigates the determinants of stock market development in a large sample of developed and emerging markets. More specifically, we test the hypothesis that privatization has an impact on SMD. For a panel data set of 37 emerging markets and 24 developed countries over the last twenty three years, we use seven indicators of SMD (reflecting size, liquidity and concentration) and two measures of privatization (namely, the method of divestiture and the reform intensity). We examine whether privatization has an immediate or a lagged effect on SMD. In order to conduct our analysis, we tackle the endogeneity problem that arises if privatization has an immediate effect on SMD, by using a panel 2SLS with instrumental variable approach. For both emerging and developed-markets, we find, that neither the method of privatization (i.e. privatization through public offers) nor the intensity of the reform (i.e., extent) has a contemporaneous effect on SMD. We also provide support for LLSV (1998), by finding that the legal origin significantly affects the level of SMD. Specifically, markets in civil law countries are less developed than markets from common law countries. However, the initial quality of the institutional environment (measured by Law and Order) yields different results: Law and Order is significantly related to SMD in emerging markets, but not in developed-markets. We next investigate the inter-temporal effect of privatization on SMD. To test this relation, we employ a panel estimation model with random effects, and find that in emerging markets, privatization (whether reflected by the method of privatization or the intensity of the program) has a significant impact on stock market size and liquidity after one and two-years. This effect is stronger in more efficient legal environments. For developed-markets, the results show that privatization intensity has a one-year-lagged effect on SMD while the method of divestiture has no such effect. In summary, our results confirm our conjecture that privatization is an important determinant of SMD conditional to the initial level of legal environment. All the more, our results show that the positive effect of privatization materializes as time goes by. Confidence building occurs on a longer horizon in emerging markets compared to developed-markets. This can be explained by the fact that the process of promoting an equity culture (Boutchkova and Megginson, 2000 and Subrahmanyam and Titman, 1999) and the confidence building for investors through the gradual resolution of policy risk following privatization (Laeven and Perotti, 2002 and Perotti and van Oijen, 2001) carry out gradually, and take more time in emerging markets. These results have important policy implications: For most governments that implement privatization, one objective through divestiture is to create a popular capitalism that will ultimately boost SMD. For this to happen, we show that several conditions need to be put in place. For example, the legal environment must guarantee investor protection so that individuals are willing to invest their wealth in the stock market. Moreover, stock market regulation is important for future growth since it signals market integrity to investors. If privatization through share issues is implemented in such a favorable environment, it will yield significant benefits for the local stock market, and contribute to long run economic growth. In this case, as stated in the confidence building hypothesis, most of the benefits of privatization will materialize in the long run for emerging markets. Developed-markets instead will benefit from the reform only in the short run. The short-term effect stems from the extent of the reform program (or privatization intensity), while the long run effect comes from the method of sale (the degree to which governments use stock markets to divest ownership).