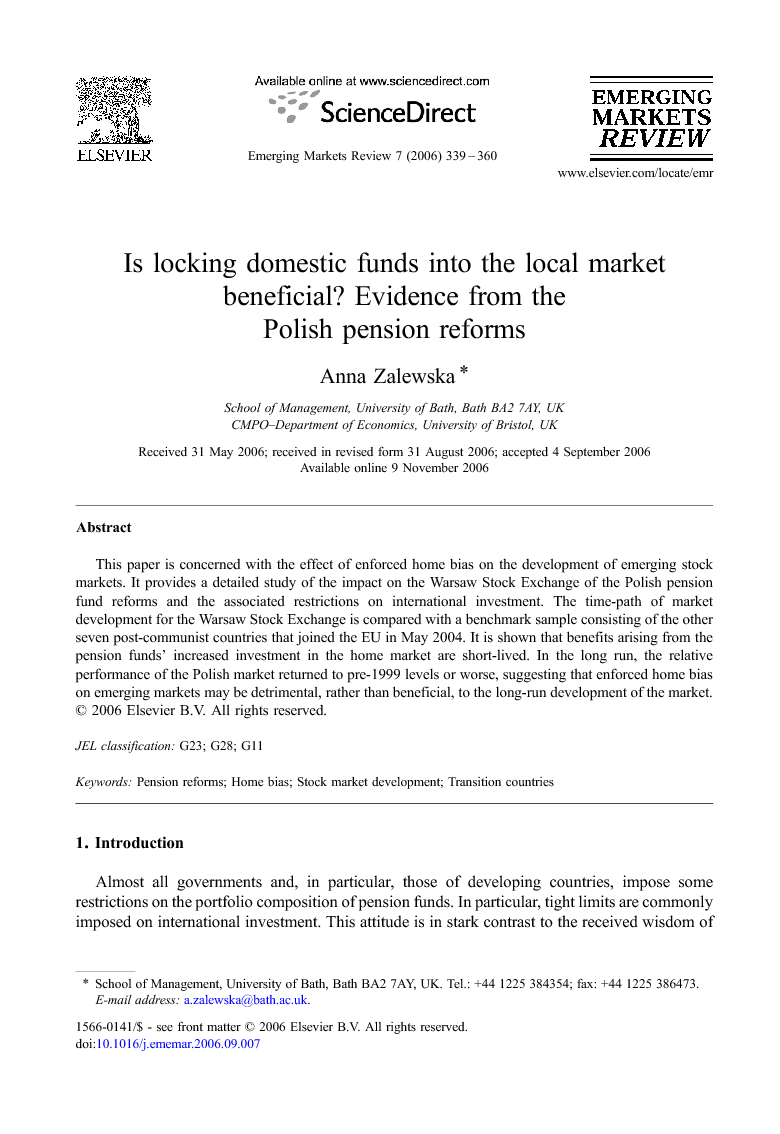 This paper is concerned with the effect of enforced home bias on the development of emerging stock markets. It provides a detailed study of the impact on the Warsaw Stock Exchange of the Polish pension fund reforms and the associated restrictions on international investment. The time-path of market development for the Warsaw Stock Exchange is compared with a benchmark sample consisting of the other seven post-communist countries that joined the EU in May 2004. It is shown that benefits arising from the pension funds' increased investment in the home market are short-lived. In the long run, the relative performance of the Polish market returned to pre-1999 levels or worse, suggesting that enforced home bias on emerging markets may be detrimental, rather than beneficial, to the long-run development of the market.

In this paper fundamental properties of the Warsaw Stock Exchange and the other exchanges operating in the post-communist countries that joined the EU in May 2004 are analysed in order to assess the impact of the pension funds' equity investments on the development of the Polish exchange. If the emergence of the pension funds has a positive impact on the development of the WSE the presented measures (size, liquidity, volatility, concentration, efficiency and integration) should improve over time on the Polish market itself and in comparison with the other markets. This is not the case. Although some immediate benefits relative to the benchmark markets can be observed, these are very short-term and are concentrated in the period 1999–2000, i.e., during the first years of the pension funds operation when their portfolios were set up. After this period, for most measures, the relative performance of the Polish market returned to pre-1999 levels or worse. This suggests that worries expressed by several researchers (e.g., Singh, 1996 and Frenkel and Menkhoff, 2004) about the negative impact of the appearance of big institutional investors on underdeveloped markets may be correct. That is, enforced home bias on emerging markets may be detrimental to the long-run development of the market. This has implications for the development of stock markets and financial structures in developing countries, and their role in development, as well as the issue of the design of pension reform.