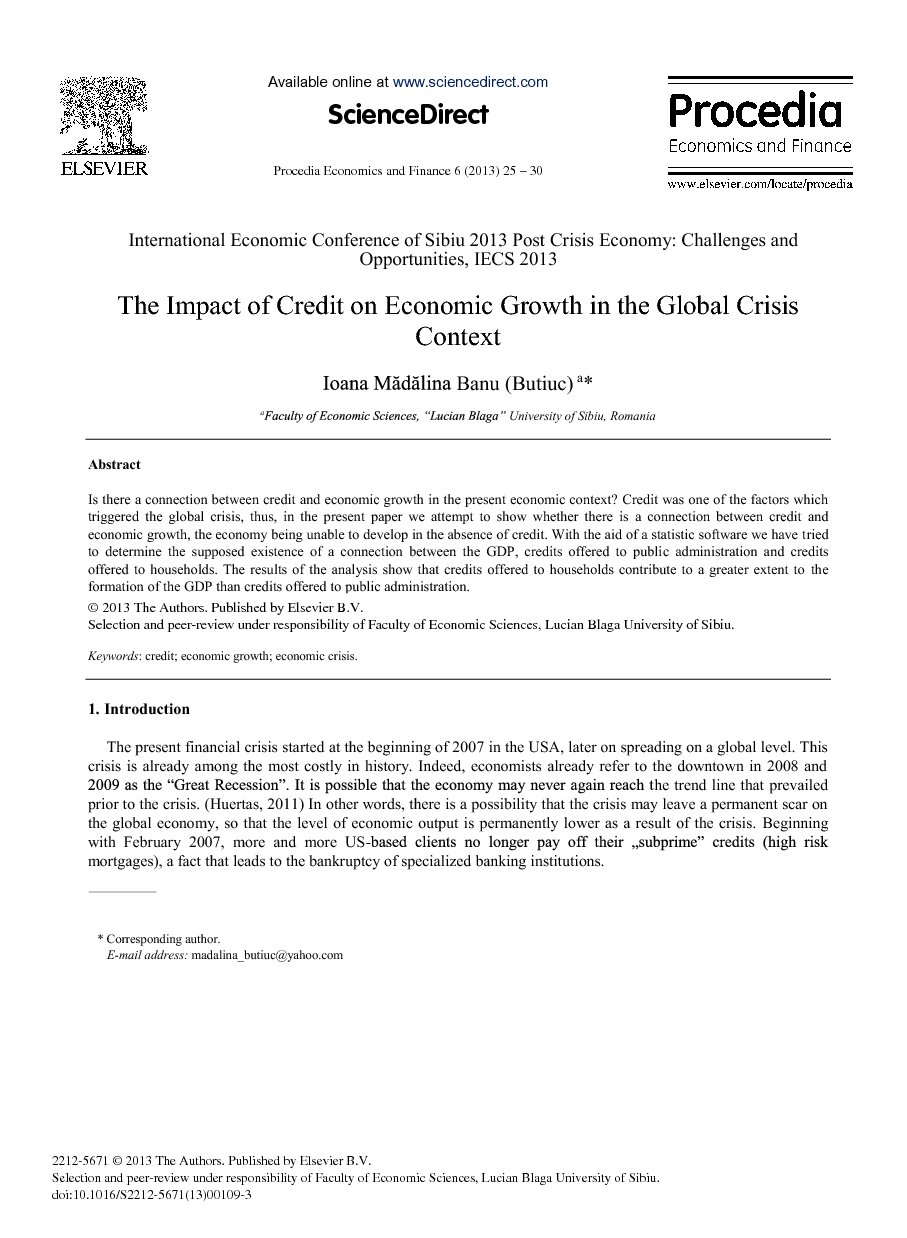 In 2007, some trends materialized in the US housing market, which negatively affected particularly the subprime segment and impacted all subprime-linked instruments. The declining housing price growth in the United States was accompanied by rising interest rates, stretched borrower affordability, low underwriting standards, and lax riskcontrol standards. About 20% of the subprime mortgages originated during 2005 and 2006 are expected to end in foreclosure, while declining housing price growth leads to lower-than-expected recovery for foreclosed properties (Felsenheimer, 2008). Anca Bidian, vicepresident of Kiwi Finance, holds that the worldwide credit market was not only affected by the economic crisis, but was the origin of the crisis itself. Thus, at the end of 2008 we can witness an abrupt contraction of credit. She holds that the effects of the crisis on credit were most dramatic in all industries, with contractions of up 70-80%. Even if one can notice a slight decrease in interest rates, this is not enough to revive the credit market, just as the rise of interest rates was not the only factor which determined its standstill. Anca Bidian holds that a revival of the economy is not possible in absence of creditation. In 2008, for the first time after the 1930s, the financial system was on the brink of collapse. Considering the causes of the present ecnonomic and financial crisis a discussion of the term globalization is paramount.Globalization is simultaneously economic and financial. Romania can speak about globalization beginning with the year 1989, along with the downfall of the former socialist block. One of the characteristic elements of the present economic globalization is its manifestation under the form of its main instrument, financial globalization (Totir, 2011). The time-span between 1989-2008 is characterized by a high degree of globalization, both on a social, and on a political and financial level. During this period one can witness a strong development of global financial markets, with transnational corporations playing an increasingly important role. The financial globalization we have witnessed during this period was largely possible due to technological innovation. This is actually a synergy of various means of communication such as mobile phones, credit cards, the internet, all of which aid communication even over great distances. Differences in time zone are quite welcome in this context, ensuring the continuity of transactions on financial markets: when European markets close, the Asian ones open. The financial crisis we are experiencing at the moment originates in the subprime credit system those mortgages which pledge the value of the acquired good. This type of credit was offered primarily to American citizens who did not fulfill credit worthiness requirements. Along with the drop of prices in the mortgage sector, it became increasingly challenging for the population to pay off these credits.

In the present paper we have attempted to analyze whether there is a connection between economic growth, the global economic and financial crisis we are experiencing at the moment, and credit. We have observed that credit was one of the factors that triggered the crisis, maybe even the most important one. Along with the obtaining of the credit the population invested in homes and luxury goods which they would have been unable to acquire otherwise. Looking back on its experience of transition towards market economy, Romania affected. In the absence of credits, Romanian economy cannot be revived with currency and thereby fails to set off new projects. Through prudential and administrative measures, the RNB constantly acted upon the credit sys speed of growth in the private sector and encouraged credits in national currency rather than foreign one. Finally, by introducing the data provided by the NBR into the SAS statistic software, we have noticed that there is a strong connection between the credits granted to households and the GDP, as compared to the credits granted to public administration and the GDP. We hold that in order to overcome the challenging moment of economic crisis Romania needs to adopt measures which lead to economic growth, while attracting foreign investments and a higher degree of absorption of European funding would certainly prove helpful in this respect.