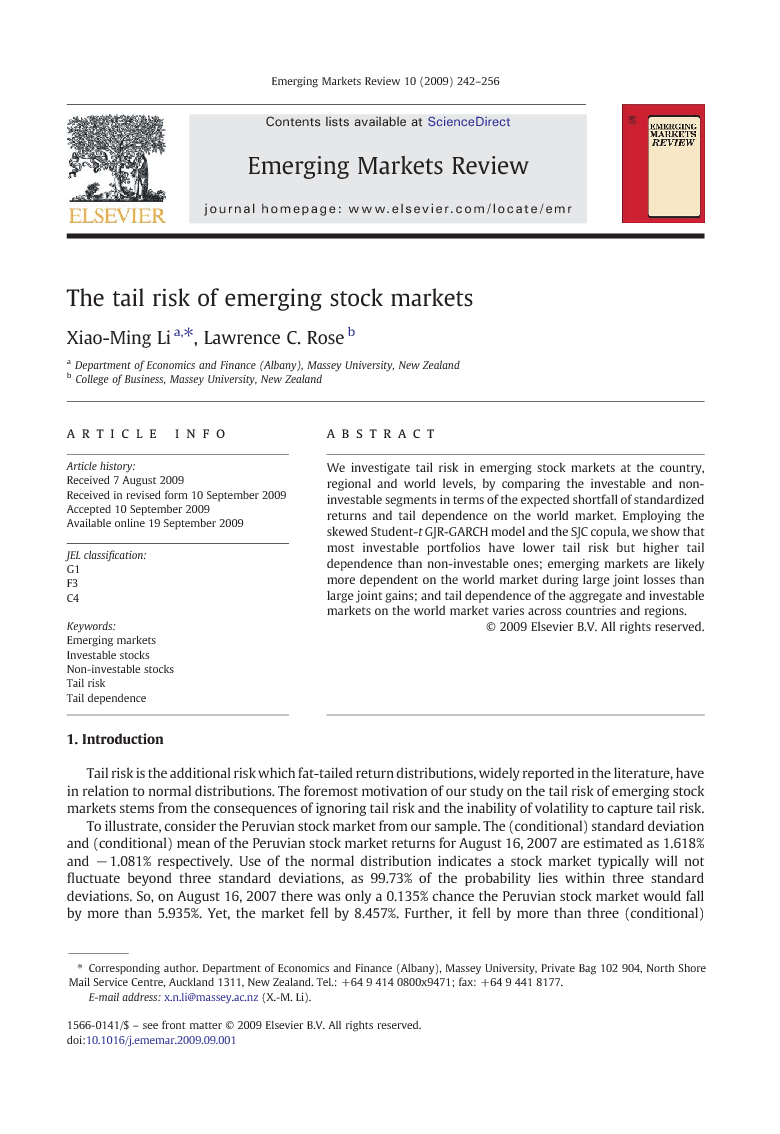 We have conducted an empirical investigation of the tail risk of emerging stock markets by comparing their investable and non-investable segments in terms of the expected shortfall of volatility-filtered returns and tail dependence on the world market. The technologies used include the skewed Student-t GJR-GARCH model for the marginal distributions, and the symmetrized Joe–Clayton copula for the bivariate distribution. We employ data on emerging stock markets at the country, regional and world levels. We show, for p = 0.135% (say), that at the local level 80%, and at the regional and world levels 83%, of investable markets are characterized by lower tail risk relative to non-investable ones, and the difference can be as great as $1.387 for a 0.135% probability for $1 invested. We also demonstrate that at the local level 67%, and at the regional and world levels 100%, of the estimated left tail dependence parameters for the investable-vs-world pairs are greater than those for the non-investable-vs-world pairs. Another finding is that emerging markets are likely more dependent on the world market during large joint losses than large joint gains. Finally, we provide evidence on how tail dependence of the aggregate and the investable market on the world market varies across countries and across regions. Our results have implications for both policymaking and asset allocation. Regarding policymaking, we argue the benefits of further stock market opening up would actually include reducing market tail risk, in addition to stimulating economic growth as conventional wisdom. As far as asset allocation is concerned, foreign portfolio managers who care about tail risk would be able to reap diversification benefits from adding (removing), in their portfolios, those Global or Investable Indices whose λAL or λIL is found to be very small (large). As a first attempt, our study has adopted a static framework. An obvious extension is to make the tail risk of emerging stock markets evolve as a function of time-varying market integration and other controlling variables. We leave this for future research.