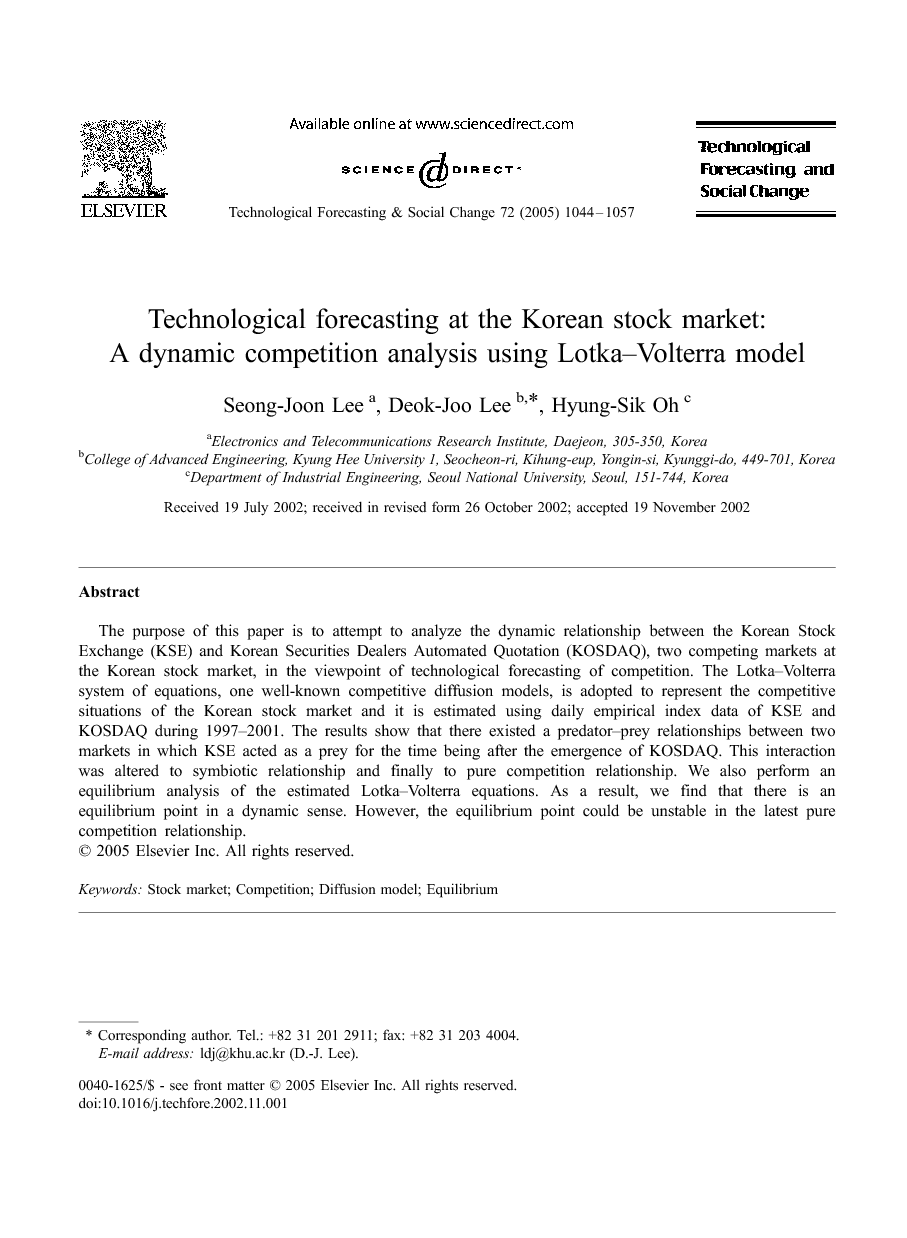 The purpose of this paper is to attempt to analyze the dynamic relationship between the Korean Stock Exchange (KSE) and Korean Securities Dealers Automated Quotation (KOSDAQ), two competing markets at the Korean stock market, in the viewpoint of technological forecasting of competition. The Lotka–Volterra system of equations, one well-known competitive diffusion models, is adopted to represent the competitive situations of the Korean stock market and it is estimated using daily empirical index data of KSE and KOSDAQ during 1997–2001. The results show that there existed a predator–prey relationships between two markets in which KSE acted as a prey for the time being after the emergence of KOSDAQ. This interaction was altered to symbiotic relationship and finally to pure competition relationship. We also perform an equilibrium analysis of the estimated Lotka–Volterra equations. As a result, we find that there is an equilibrium point in a dynamic sense. However, the equilibrium point could be unstable in the latest pure competition relationship.

Korean stock market has expanded enormously since Korean Securities Dealers Automated Quotation (KOSDAQ), an over-the-counter market modeled after the US NASDAQ, emerged in 1997. Since the conditions of listing on KOSDAQ are much easier than the traditional Korean stock market, the Korean Stock Exchange (KSE), many small and medium companies including venture firms can succeed in IPO and their securities are traded at KOSDAQ market. Now, some excellent high-technology-based companies in KOSDAQ market even have a greater market value than the large firms listed in KSE. After the Korean economic crisis in 1997, owing to the government's venture company support policies to overcome the economic hardship, the activities of ventures companies were markedly increasing and investors were paying attention to this emerging potential market. This was contemporary with hot interests for information technology (IT)-related companies all over the world. Thereafter, KOSDAQ market has rapidly expanded, while the traditional manufacturing firms listed on KSE attracted little attention from investors. Few years later, the heat of KOSDAQ market dissipated with the excessive appearances of nonprofitable ventures and the recession of international economy. This phenomenon caused investors to be conservative on the venture industry and they were likely to pay attention to fundamental factors and more stable companies. Consequently, KOSDAQ market experienced a crash and the money from the stock investors flew into KSE again. Looking at the above trend of Korean stock market, it can be thought that the Korean investors seem to regard each market, KSE or KOSDAQ, as a distinct niche on a single stock market. Of course, most inventors make diversification strategies by portfolio of both markets. However, in this case, they should determine how to allocate their restricted capital budget to certain amount of stocks from each market according to their expected investment value of each market. For this reason, we cannot affirm that two markets move toward the same direction by common shocks. An economic event may be good news to one market, while bad to the other, and investors regard each market as an independent alternative to make portfolios. This fact suggests that KSE and KOSDAQ market would rather interact as individual markets than belong to a single stock market. This means that, in order to understand Korean stock market in detail, it is necessary to clarify the exact relationship of both markets. Toward this end, this paper is based on the rationale that the relationships of two markets could be best understood by viewing them as species competing for investor's resources. That is, we regard the two markets as competitors or as competing goods in a single market. This situation could be described by diffusion models, which explain the growth of cells or species in ecology [1]. Particularly, Lotka–Volterra equation includes a competition mechanism in the diffusion process. This model incorporates the dynamics of competition between species in ecology system. It classifies the relationship of competing species into natural selection, survival of the fittest and predator–prey interaction under restricted space and resources. In marketing researches, Lotka–Volterra equation has been adopted to describe the diffusion process of durables with the entry of new competitor in existing monopoly market [2], [3], [4] and [5]. Research that applied diffusion models to explain the growth of stock market is sparse. Modis [6] analyzed the behavior of common stocks by Lotka–Volterra model as if they were species competing for investors' resources. He considered investors' attention and money as the objective of firms' competition in stock market, just as the rabbits compete for grass in their ecology system. He selected daily exchange value of stock market and bond market as growth variables in the model. He examined data that span 30 years worth of history by dividing them into two periods punctuated by the crash of 1987, and he analyzed the change of competitive roles between stock market and bond market. In his analysis, it is argued that the crash turned mutual relationship into the predator–prey relationship. His work is very insightful in that it considered stock market and bond market as two competing species for investors' money. His idea underlies our research and we try to apply his idea to the Korean stock market. The purpose of this work is to analyze the dynamic relationship between KSE and KOSDAQ as if they were competing for investors' capital. Using Lotka–Volterra equation, this paper shows that the competing roles between two stock markets have variously changed since the emergence of KOSDAQ market. Furthermore, we perform an equilibrium analysis of the estimated Lotka–Volterra equations and the stability of equilibrium. An attempt of this equilibrium analysis, which was not accomplished in Modis [6], could be considered as an important contribution of this paper. The remainder of this paper is organized as follows. In Section 2, we explain the application of Lotka–Volterra model and the methodology. In Section 3, we present our empirical results and discuss the findings. Conclusion follows in Section 4.

We have analyzed the dynamic relationship between KSE market and KOSDAQ market after the introduction of KOSDAQ market. We estimated trajectory curve annually with daily data by employing Lotka–Volterra equation. The analysis of estimated parameters empirically shows the characteristics of competitive relationship between KSE and KOSDAQ. Additionally, we can identify the stability of the equilibrium with the result of year 2001. Our results show that two of the yearly results indicate the predator–prey relationship with KOSDAQ acting as a predator right after emergence of KOSDAQ. We may interpret that it was attributed to the government's active support toward venture industry and investors' interest in new market. This interaction was altered to the symbiotic relationship and finally to the pure competition relationship. However, some coefficients of our model showed low level of statistical significance. The equilibrium analysis suggests that the Korean stock market has an unstable equilibrium point in the latest competition relationship. Although various changes of Korean stock market were due to the emergence of KOSDAQ, there are few academic works that argue the relationship between KSE and KOSDAQ. Thus, this work may shed some light on the interpretation of the dynamic competitive relations in Korean stock market after the appearance of a new market. This work is also meaningful in that it shows how the entry of new alternative, KOSDAQ, changes market structure and investors' demand under the limited environment with single market, KSE. It can be applied to the analysis for other countries' stock markets if we select the proper variables and adapt the situation of other markets well.