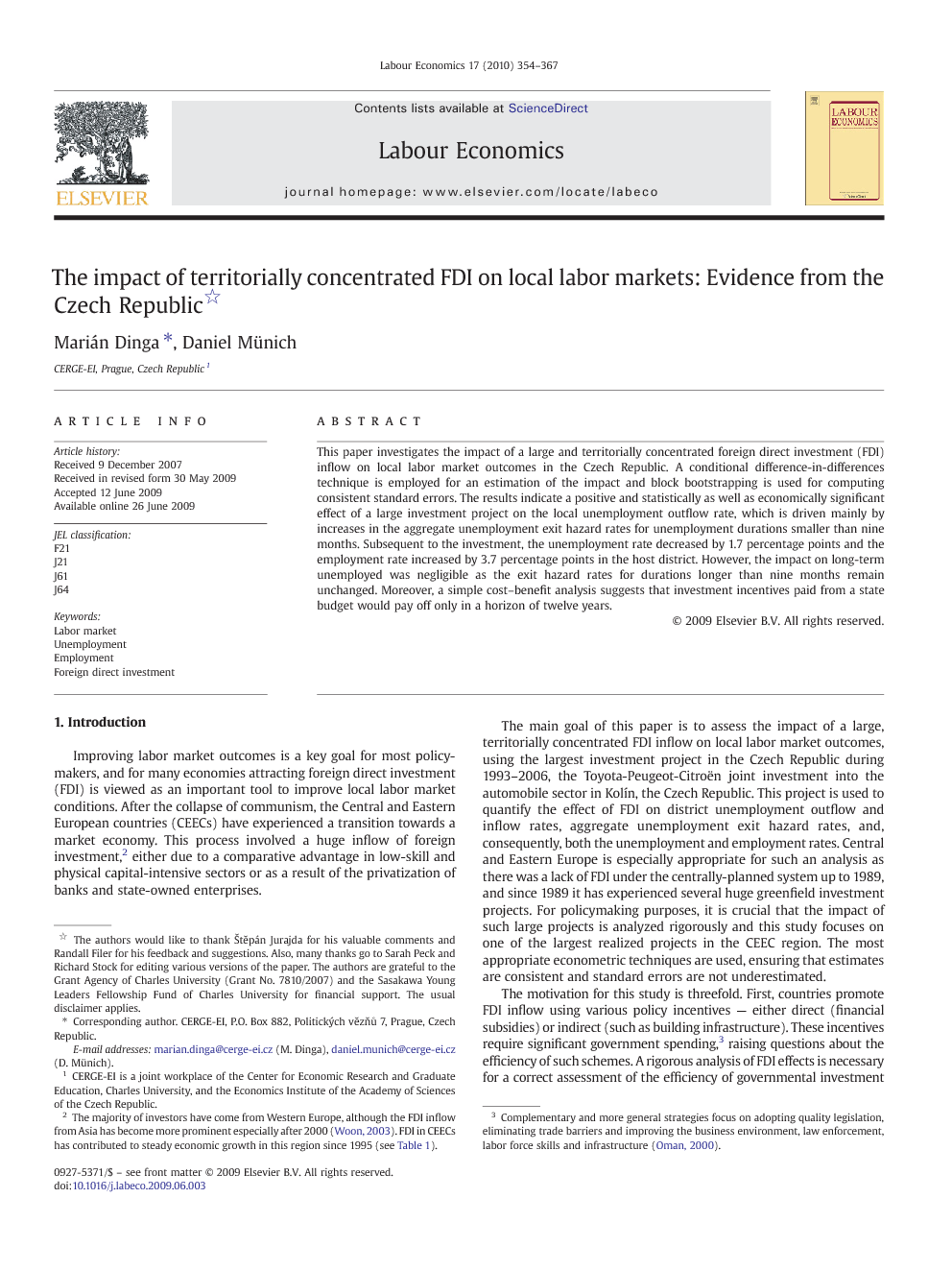 This paper investigates the impact of a large and territorially concentrated foreign direct investment (FDI) inflow on local labor market outcomes in the Czech Republic. A conditional difference-in-differences technique is employed for an estimation of the impact and block bootstrapping is used for computing consistent standard errors. The results indicate a positive and statistically as well as economically significant effect of a large investment project on the local unemployment outflow rate, which is driven mainly by increases in the aggregate unemployment exit hazard rates for unemployment durations smaller than nine months. Subsequent to the investment, the unemployment rate decreased by 1.7 percentage points and the employment rate increased by 3.7 percentage points in the host district. However, the impact on long-term unemployed was negligible as the exit hazard rates for durations longer than nine months remain unchanged. Moreover, a simple cost–benefit analysis suggests that investment incentives paid from a state budget would pay off only in a horizon of twelve years.

Improving labor market outcomes is a key goal for most policymakers, and for many economies attracting foreign direct investment (FDI) is viewed as an important tool to improve local labor market conditions. After the collapse of communism, the Central and Eastern European countries (CEECs) have experienced a transition towards a market economy. This process involved a huge inflow of foreign investment,2 either due to a comparative advantage in low-skill and physical capital-intensive sectors or as a result of the privatization of banks and state-owned enterprises.The main goal of this paper is to assess the impact of a large, territorially concentrated FDI inflow on local labor market outcomes, using the largest investment project in the Czech Republic during 1993–2006, the Toyota-Peugeot-Citroën joint investment into the automobile sector in Kolín, the Czech Republic. This project is used to quantify the effect of FDI on district unemployment outflow and inflow rates, aggregate unemployment exit hazard rates, and, consequently, both the unemployment and employment rates. Central and Eastern Europe is especially appropriate for such an analysis as there was a lack of FDI under the centrally-planned system up to 1989, and since 1989 it has experienced several huge greenfield investment projects. For policymaking purposes, it is crucial that the impact of such large projects is analyzed rigorously and this study focuses on one of the largest realized projects in the CEEC region. The most appropriate econometric techniques are used, ensuring that estimates are consistent and standard errors are not underestimated. The motivation for this study is threefold. First, countries promote FDI inflow using various policy incentives — either direct (financial subsidies) or indirect (such as building infrastructure). These incentives require significant government spending,3 raising questions about the efficiency of such schemes. A rigorous analysis of FDI effects is necessary for a correct assessment of the efficiency of governmental investment policies.4 In other words, it remains an open question whether the real benefits arising from an investment project in a particular region outweigh the cost of the subsidies for the state budget.5 FDI subsidies are usually scaled according to the target region. Governments assume the effect of FDI inflow on the local economy is economically significant and thus, firms that invest in regions with higher unemployment rates are preferred and receive more favorable treatment (a higher level of financial incentives). From a social standpoint, this regional differentiation is justified only if concentrated FDI inflow substantially improves local labor market outcomes. Second, while there seems to be a great deal of literature concerning the effects of FDI on firm performance, there are few studies analyzing the impact of large FDI inflows on local labor markets. Studies have focused on the implication of FDI on the productivity of domestic firms (Aitken and Harrison, 1999 and Javorcik, 2004) and on regional development (Harris and Taylor, 2005) but there is limited research evaluating the impact of investment on local labor market outcomes (Mickiewicz et al., 2000). Third, the automobile investment project in Kolín was quite unique in its scale and therefore it provides a good opportunity to accurately evaluate the impact of a large one-off project. The average effect of the investment project on the local labor market is estimated using matching techniques. The idea is to match a treated district with otherwise similar districts that did not undergo a large FDI inflow so that labor market dynamics can be compared to a counterfactual state for the treated district. We employ the method of propensity score matching as introduced by Rosenbaum and Rubin (1983) and the identification strategy is based on a conditional difference-in-differences estimation, following Heckman et al. (1997). The findings suggest that the one-off investment project has a statistically significant and economically sizeable impact on the unemployment rate and the employment rate, driven by an increase in short-term unemployed exit hazard rates.

In this paper, we evaluate the impact of the TPCA investment project (the largest foreign investment project in the Czech Republic between 1993 and 2006) in the district of Kolín on local labor market performance. Our identification strategy rests on a comparison of Kolín with control groups of districts. Control group districts did not experience as large an FDI influx as Kolín, but otherwise resemble Kolín in terms of labor market structure and the propensity to attract a large one-off FDI inflow. Using difference-in-differences estimation, the investigation of the dynamics of the unemployment rate, the employment rate, unemployment flows and aggregate exit hazard rates out of unemployment indicates a positive and significant (both statistically and economically) impact on the unemployment rate, which decreases by 1.7 percentage points. The impact on the employment rate is also positive as the employment rate increases by 3.7 percentage points following the TPCA investment. Thus, the investment project affected the whole district positively: the estimated number of people who found a job exceeded the number of employees at TPCA. Since it is known from anecdotal evidence that more than half of the workers in the company migrated to get a job at TPCA, there must have been a substantial spillover on suppliers or other industries. To summarize, the local labor market arguably benefited from FDI inflow and a crowding-out effect to counteract direct vacancies created by such a project appears not to have occurred. The main factor that contributed to the unemployment decrease was an increase in outflow rate from unemployment of 2.6 percentage points while the inflow rate into unemployment remained unaffected. As can be deduced from the exit hazard rates analysis, a higher outflow rate and a subsequent decrease in average duration is driven primarily by a rise in aggregate exit hazard rates from unemployment with a duration of less than 9 months, increasing by 2.5, 3.2 and 4.4 percentage points in the three duration categories. On the other hand, unemployment durations greater than 9 months do not display any significant impact of the investment project, illustrating the alarming fact that only short-term unemployed benefit from a new plant opening. This finding points to a persistance of unemployment and asserts that the long-term unemployed remain intact with government-driven job creation schemes. Returning this group of unemployed into the working process remains one of the main challenges of policymaking. Various robustness checks such as different specifications of time delay to account for a possible lag in the investment impact, alternative estimates of standard errors (bootstrapped from the data) and simulations of placebo interventions were applied since there is some doubt about the consistency of conventional difference-in-differences standard errors (Bertrand et al., 2004). Indeed, a serious underestimation of the standard deviation of the simple OLS estimates was found and, therefore, a blocked bootstrap technique was used to compute standard errors. The consistency of standard errors was checked by placebo simulations, where a thousand placebo interventions were randomly generated. Block bootstrapping substantially reduces the number of false rejections of the null hypothesis, however, the rejection rate is still slightly greater than 5%. Most importantly, the estimates do not change magnitude or significance and the results remain valid under different specifications. Considering the investment incentive for TPCA (1.78 billion CZK) and its estimated net impact on unemployment (800 unemployed individuals finding a job), the financial subsidy per one created job amounts to 2.23 million CZK. A simple per capita comparison of pecuniary costs incurred and expenditures saved on benefits to unemployed can provide a useful assessment benchmark of the relative price of this subsidy. Saved benefits can be calculated as the sum of average yearly direct unemployment benefits, taxes and social insurance contributions imposed on wages. Elbona (2005) asserts that the average yearly direct unemployment compensation is about 0.12 million CZK per one unemployed and 0.175 million CZK if lost tax revenues are considered. Based on these approximations, the investment project would pay off, in simple monetary terms, if jobs created would be secured for at least twelve years. Should the investor decide to move the production after 2015, twelve years since the jobs were created, the whole project would bring a net fiscal gain. However, such approximations should be considered cautiously. Firstly, we provide only the medium-term impact of a relatively recent policy intervention, while long-term outcomes will be revealed only after many years. Secondly, our estimates do not capture the long-term net spillover effect, likely a positive one, affecting the rest of the country beyond the borders of the Kolín district. Thirdly, one can hardly predict whether the large investment project in Kolín prevented some other projects from coming in the future. Therefore, at this moment, it is too daring to hypothesize about the long-term impact on the local labor market or the whole country. However, we can conclude that the FDI incentives seem to fiscally worthy as it is likely the production plant will remain producing for at least twelve years — the upper bound of the minimum time required to produce a payoff.