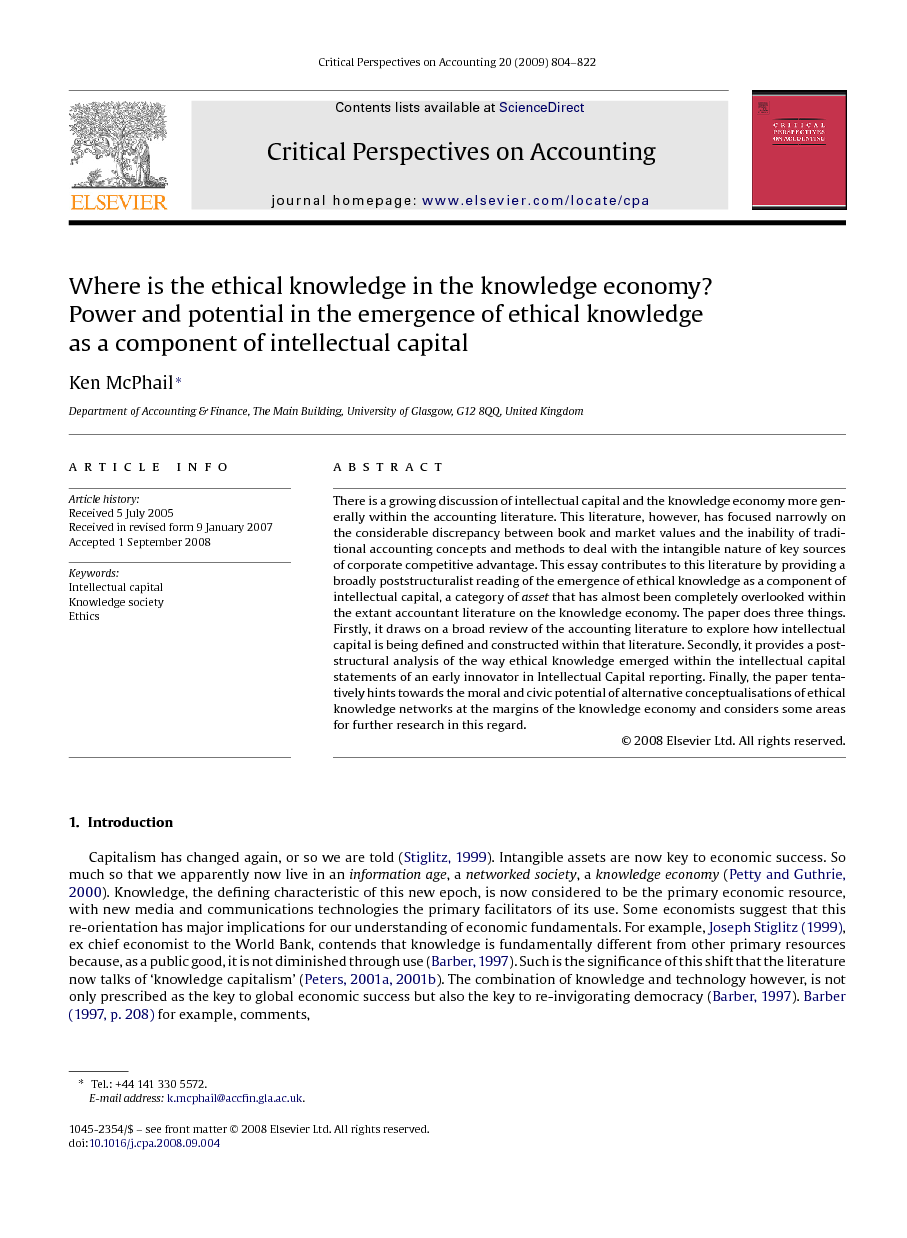 There is a growing discussion of intellectual capital and the knowledge economy more generally within the accounting literature. This literature, however, has focused narrowly on the considerable discrepancy between book and market values and the inability of traditional accounting concepts and methods to deal with the intangible nature of key sources of corporate competitive advantage. This essay contributes to this literature by providing a broadly poststructuralist reading of the emergence of ethical knowledge as a component of intellectual capital, a category of asset that has almost been completely overlooked within the extant accountant literature on the knowledge economy. The paper does three things. Firstly, it draws on a broad review of the accounting literature to explore how intellectual capital is being defined and constructed within that literature. Secondly, it provides a poststructural analysis of the way ethical knowledge emerged within the intellectual capital statements of an early innovator in Intellectual Capital reporting. Finally, the paper tentatively hints towards the moral and civic potential of alternative conceptualisations of ethical knowledge networks at the margins of the knowledge economy and considers some areas for further research in this regard.

Although it would seem that ethical knowledge did begin to emerge as a component of intellectual capital within Carl Bro's accounts, whether this specific case is indicative of other attempts to recognise, record and manage the business value of ethics (Sen, 1999; Willmott, 1998 and Bowie, 1982) requires further investigation. Yet as the Parker's (2002) sentiments imply, much more research is required, not only into the potentially deleterious impact of the emergence of ethical knowledge as a component of intellectual capital, but also into the potential these shifts represent for more participatory and deliberative forms of accountability and democracy. There may be scope here to draw on alternative conceptualisations of ethical knowledge emerging at the margins of the knowledge economy. For example, the kind of ethical knowledge being discussed and captured within Car Bro's statements seem to construe ethical behaviour as an individual achievement, rather than a network achievement. Although the literature is beginning to make the connection between the knowledge society and Habermasian discourse ethics (O’Donnell et al., 2000 and Daboub and Calton, 2002), some new thinking around this particular socio-economic shift, specifically in the area of knowledge networks, and Network Science (Barabasi, 2003; Susani, 2002 and Madey et al., 2002), may provide the basis for a shift away from viewing ethics as the outcome of a process of rational dialogue, or ethics as an individual achievement, to ethics as a network achievement. Recasting accounting and business ethics in these terms might be helpful for beginning to explore both the kinds of networks and the type of network characteristics conducive to broader civic goals. Appling a networked perspective to ethics, may similarly lead us to explore the kinds of networked forms of organisation, corporate and otherwise, required for a particular normative ethic to work, or which might allow moral sense to function19 ( Midgley, 2003, Bauman, 1989, Hutcheson, 1999, Hand, 1989, Smith, 1976 and Wilson, 1993). For example, Rawls’ Veil of Ignorance and Original Position may only work within a particular kind of networked configuration of relationships, a network that provides us with connections into other peoples lives (Rawls, 1972). This is just one ill-defined example of the ways in which networked configurations may be seen to be significant, in the same way, for example, that particular social conditions might be seen to follow from Rawls’ position. Similarly, Open source methodology20 (Schweik and Semenov, 2003) may also provide an interesting counterpoint to the forms of governmental technology identified above. Open source software provides new economic and project based examples of new kinds of economic networks, networks that are self-organizing and collaborative.21 The open source approach has been proposed as a more general methodology for solving complex problems (Schweik and Semenov, 2003 and Lessig, 2002). Indeed, Schweik and Semenov (2003) postulate that open source might provide a model for addressing complex management and public policy problems. They specifically discuss how this model might be adapted to their International Forestry Resources and Institutions (IFRI) study of forestry management. They comment, “Imagine applying an “Open Content” approach to this endeavour. It would involve an “Open Publication License” … which follows generally the same principles as the Open Source Definition described earlier, but applies them to information content (e.g., documents, databases, etc.) rather than computer programs.” In a similar manner, it might be possible to at least begin to ‘imagine’ how an open source approach might be applied to ethical codes, ethical dilemmas within a corporate setting and constructing ethical knowledge databases around particular dilemmas for example. There is just the beginning of some awareness of the need for linked and cross-company ethical knowledge management systems within The International Federation of Accountant's (IFAC) work on ethics and professionalism. For example, one of the objectives of a recent forum was to ‘consider the proposal from the Professional Oversight Board that the CCAB should facilitate the establishment of arrangements by which selected experience of the accountancy firms in dealing with ethical issues and fraud can be shared with other firms and, as appropriate, with the wider profession for use in CPD.’ Again, it is at least possible to envisage how an open source methodology might be applied to this particular proposal. A final example of a potentially more democratising form of knowledge technology might be found in the networking technologies of activist groups and independent media developments on the WEB. Examples of networked models of ethics can be found in, for example, the type of pod casts22 and blogs23 emerging on activist networks and corporations. These types of innovation might be used as prototypes for capturing tacit and other forms of ethical knowledge and developing ethical knowledge networks more generally either within corporations or including corporations.24 Of course one can envisage how these technologies might result in more surveillance, colonisation and governmentality. The objective here is to mitigate against an overly simplistic and overly oppressive and negative view of power in the knowledge economy and simply to introduce some concepts for further thought and consideration that have not yet been adequately addressed within the accounting literature. The paper has critically explored whether and how ethics is emerging within the practice of intellectual capital reporting. Ethical knowledge did begin to emerge as a component of intellectual capital within Carl Bro's accounts. The accounting literature predominantly orientates the concept of intellectual capital within fairly mainstream economic growth theory (Petty and Guthrie, 2000) and is lacking a more detailed discussion of ethics and analysis of the civic and democratic potential within the developments which collectively constitute ‘the knowledge economy’.