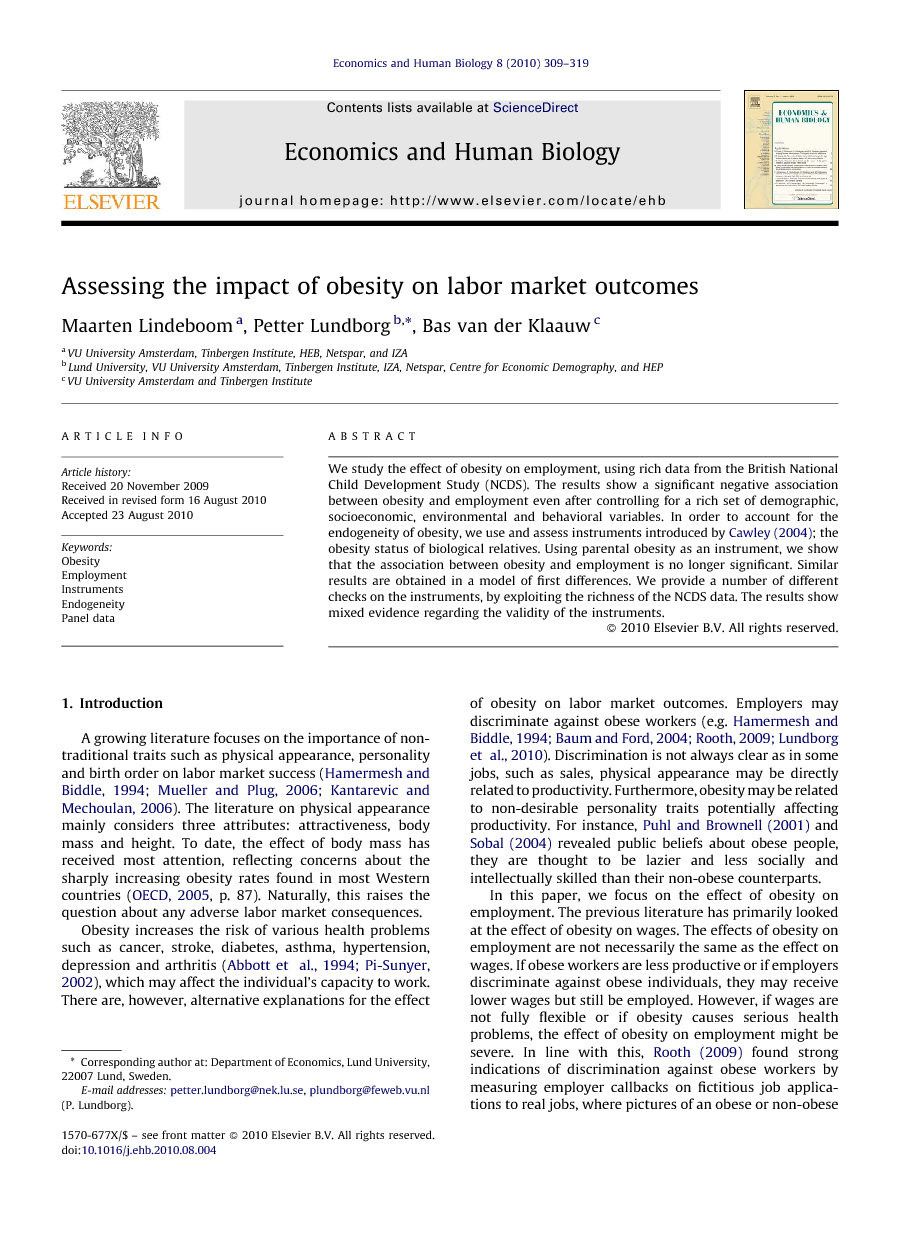 We study the effect of obesity on employment, using rich data from the British National Child Development Study (NCDS). The results show a significant negative association between obesity and employment even after controlling for a rich set of demographic, socioeconomic, environmental and behavioral variables. In order to account for the endogeneity of obesity, we use and assess instruments introduced by Cawley (2004); the obesity status of biological relatives. Using parental obesity as an instrument, we show that the association between obesity and employment is no longer significant. Similar results are obtained in a model of first differences. We provide a number of different checks on the instruments, by exploiting the richness of the NCDS data. The results show mixed evidence regarding the validity of the instruments.

We had two main aims with this paper. The first was to study the causal effect of obesity on employment using (1) parental obesity as an instrument and (2) a fixed effects approach. The second was to carefully assess the validity of using the body size of a biological relative as an instrument for one own's body size. This latter aim was motivated by the growing literature that uses instruments supposed to carry genetic information. Starting with our first aim, we obtained no results suggesting a strong causal effect of obesity on employment. We started by showing that there exist large differences in employment probabilities between obese and non-obese men and women. We also showed that these associations did not disappear when controlling for a wealth of potentially important factors pertaining to family background, cognitive ability, and inputs during childhood and adolescence. When we instrumented the individual's obesity status with that of the respondent's mother and father, no significant effect remained, however. This result was confirmed in panel data regressions on first differences in employment and obesity. With this strategy, we removed unmeasured time-invariant heterogeneity, such as the influence of common genes. Our results confirm those of Cawley, 2000a and Cawley, 2000b and Norton and Han (2008), where no effect of obesity on employment among US men and women was obtained, but contrast to those obtained by Morris (2007) for the UK. One potential reason for the diverging findings is that genetically induced variation in obesity was used to identify the effect in this study and in the studies by Cawley, 2000a and Cawley, 2000b and Norton and Han (2008), whereas Morris (2007) relied on variation in obesity induced by local area variation in average BMI. Since different instruments are being used, the compliant subpopulation may very well differ between the studies and different Local Average Treatment Effects will be produced. Regarding our second aim, assessing the validity of so called “genetic” instruments, we obtained some mixed results. Our tests of the instruments suggested that it is mainly genetic variation which causes intergenerational correlation in obesity, while environmental factors play less of a role. This is in line with evidence from a large number of studies in medicine, where no common household effects are obtained. The instruments passed our tests for overidentifying restrictions, but the p-values were somewhat low in some specifications. This does not need to imply that our instruments were not valid, since a rejection of the Sargan test statistic could also result from treatment heterogeneity between the instruments. Such an interpretation would, on the other hand, raise the question as to why the compliers would be different when using fathers’ obesity or mothers’ obesity as instruments. Since both parents provide 50% of the child genes, one would expect similar results irrespective of what instrument is used. Future studies should further assess the validity of using the weight of a biological relative as an instrument. To conclude, if obesity has a causal effect on some labor market outcomes, there may be large gains at both the individual and societal level from more efficient obesity treatments. Indeed, previous studies have suggested relatively large penalties from being obese. If obesity is simply picking up some other, unmeasured trait, treatments and/or policies aimed at reducing obesity will not have the intended effects on labor market outcomes. It is, therefore, of great importance to increase the knowledge about the causal effect of obesity on labor market success. While our results do not imply that obesity affects employment, these results were obtained in a UK context and using a particular type of instrument. Since the literature on the effect of obesity on employment is rather limited, it should be of great interest to analyze the corresponding effects in other countries, where the labour markets look different, and using different sources of variation in obesity.