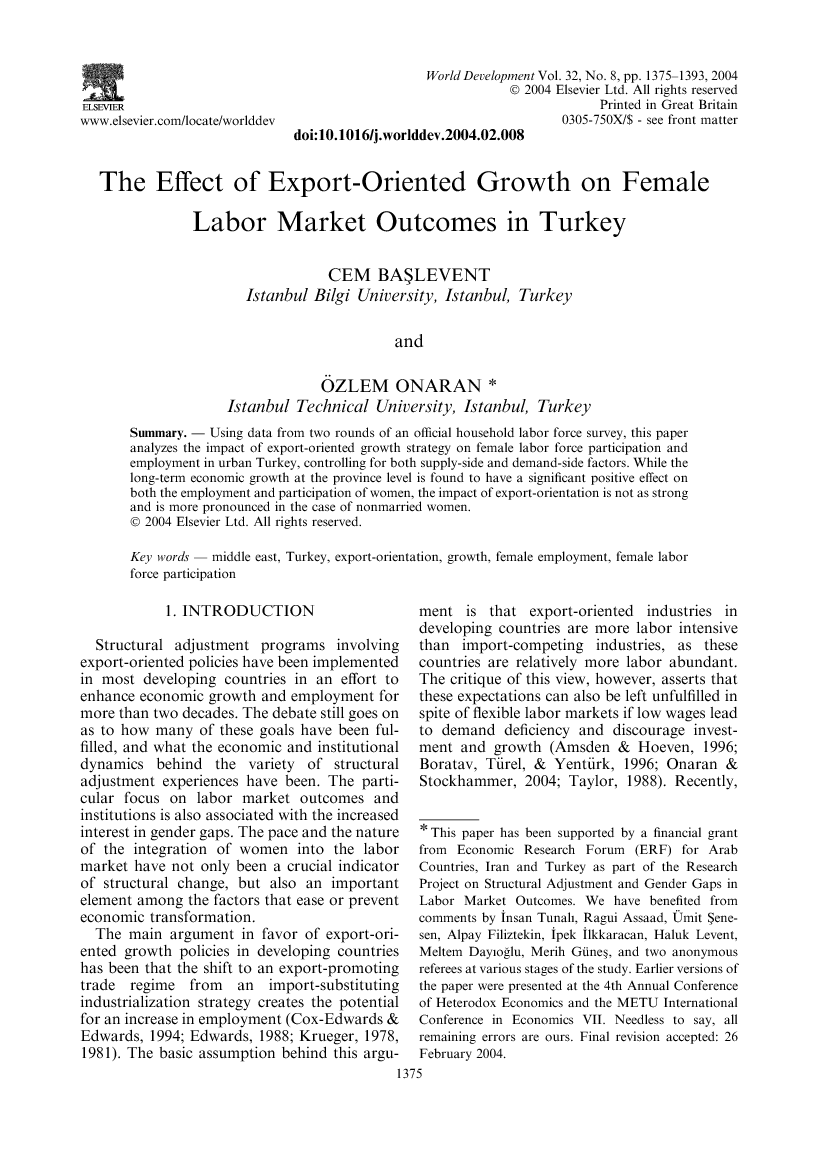 Using data from two rounds of an official household labor force survey, this paper analyzes the impact of export-oriented growth strategy on female labor force participation and employment in urban Turkey, controlling for both supply-side and demand-side factors. While the long-term economic growth at the province level is found to have a significant positive effect on both the employment and participation of women, the impact of export-orientation is not as strong and is more pronounced in the case of nonmarried women.

The purpose of this study was to analyze the effects of macroeconomic factors, and in particular the export-oriented growth strategy, on female labor force participation in urban Turkey. Using labor force survey data and province-level data on per capita GDP and export intensity in 1988 and 1994, we found that the effect of long-term growth performance on female labor market outcomes is significantly positive for both single and married women, and the effect is realized in the long run, rather than short-run. In accordance with the “feminization of labor” literature, export orientation was found to be positively correlated with female labor force employment and participation. Further inference revealed, however, that a general positive effect is only observed in the case of single and/or younger women, whereas the benefits of exports can only be influential on married women's employment outcomes via the conventional female-employing sectors like textiles or food, and with a time lag. Moreover, for married women, there is no influence of export orientation on participation. Thus limited, but positive effects of export orientation in certain industries does not necessarily create an environment where married women would participate more. This indicates the continuity of the problem Turkey is facing regarding low female participation rates. Even for the single women, export orientation is no longer significant for employment during the crisis after controlling for GDP per capita in the province. The results point to the importance of a sustainable and high level of economic activity in achieving higher female participation/employment. Furthermore our results on the difference between single and married women clearly indicate the importance of the gender-based division of labor in the household, indicated by the slower and weaker response of married women to the macroeconomic changes. In order for women to be able to harvest the benefits of more favorable macro-conditions, there is also a need for a break away from the traditional gender based division of labor, which leads to the concentration of married women in domestic work, or at best informal practices centered around home-based self-employment. Such a change will also reflect itself onto the gender-based sectoral segregation and make the effects of structural changes more accessible for the majority of women.