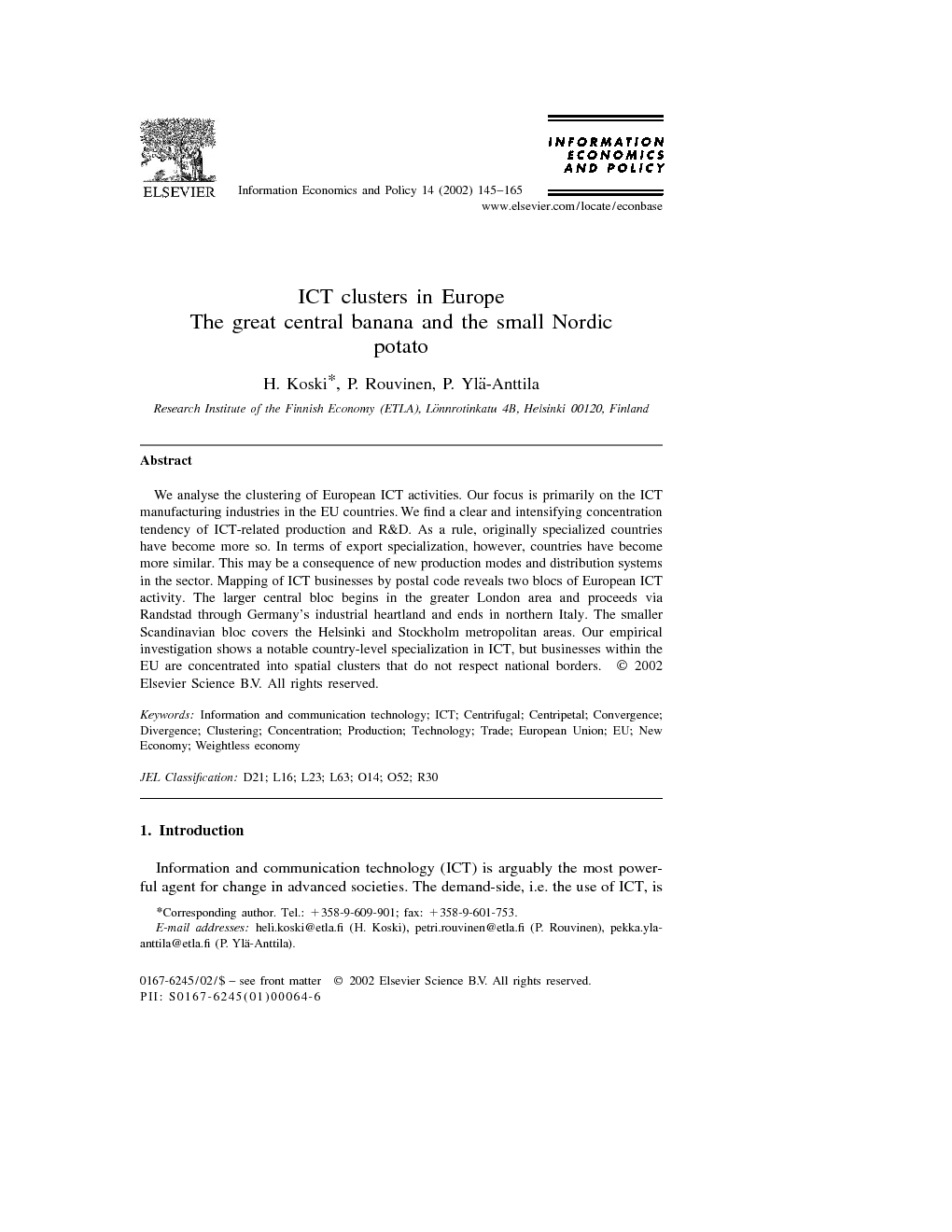 We analyse the clustering of European ICT activities. Our focus is primarily on the ICT manufacturing industries in the EU countries.We find a clear and intensifying concentration tendency of ICT-related production and R&D. As a rule, originally specialized countries have become more so. In terms of export specialization, however, countries have become more similar. This may be a consequence of new production modes and distribution systems in the sector. Mapping of ICT businesses by postal code reveals two blocs of European ICT activity. The larger central bloc begins in the greater London area and proceeds via Randstad through Germany’s industrial heartland and ends in northern Italy. The smaller Scandinavian bloc covers the Helsinki and Stockholm metropolitan areas. Our empirical investigation shows a notable country-level specialization in ICT, but businesses within the EU are concentrated into spatial clusters that do not respect national borders. Ó 2002 Elsevier Science B.V. All rights reserved.

Information and communication technology (ICT) is arguably the most powerful agent for change in advanced societies. The demand-side, i.e. the use of ICT, is perhaps the more important one in considering productivity and other macroeconomic effects. A particularly interesting question is the contribution of ICT use to economic growth (see, for example, Jalava and Pohjola, 2002). The supply-side, i.e. the production and provision of ICT-related goods and services has, however, grown to a sizeable business in its own right not only in the United States but also in Europe and elsewhere. Both the production and use of ICT are unevenly distributed across countries and regions (Quah, 2001). While this is typical of emerging and fast evolving technologies, there are particularly significant spatial differences in the patterns of ICT production. Traditional explanations for these differences include distinct factor endowments, technologies, and policies. Regions with originally similar or identical characteristics may develop in very different directions. Hence, the locational patterns of ICT cannot be explained in terms of factor endowments and policy regimes only. The views of new economic geography and micro-(firm-)oriented industrial economics are needed. The tendency of particularly knowledge-driven industries to cluster geographically as well as the implications of the new growth theories have also been recognized in policy making. Countries and regions are moving their policies towards ‘creating favourable framework conditions’ (see, for example, OECD, 1999a). The rationale of these policies is to enhance the creation of pools of advanced factors of production that attract knowledge-intensive firms and hence lead to fast growing industrial clusters. In this paper we look at the clustering of the ICT sector in the European Union (EU). Due to data limitations, our focus is primarily in the country-level production of ICT manufactures. We address the following issues. · Location of European ICT sector activities. · Relative specialization of European economies in production, technology, and trade. · Changes in ICT-orientation over time. · Explanations of changing patterns of ICT specialization.

In accordance with predictions of the new growth theory and the new economic geography, our data show that there seems to be a clear tendency of ICT-related production and innovation to cluster geographically. Our empirical explorations also indicate that regional (country-level) specialization on ICT has increased in the 1990s. Three European countries—Finland, Ireland and Sweden—are currently specialized in ICT production, technology and trade. Especially in Finland, the role of ICT has grown substantially during the past decade. In the beginning of the 1990s, Finland was one of the least ICT-specialized industrial countries; now its amongst the most ICT-intensive countries in the world. As a rule, however, the rankings of the sample countries according to the three measures used have changed relatively little. Our analysis suggests that certain countries have become relatively more specialized in ICT production and R&D than others during the 1990s, i.e. countries have diverged. In terms of export specialization, however, the countries seem to have converged, i.e. they have become more similar. Convergence in export specialization stresses the increasingly important role of production and distribution networking in the sector. The trade of ICT products, intermediate goods, and components has rapidly increased as a consequence of the new production modes and distribution systems. This suggests that great caution should be exercised in interpreting export-specialization figures across countries. Export specialization may or may not be an indication of comparative advantage in ICT-related goods. As our mapping exercise illustrates, ICT-related businesses in Europe are concentrated around major urban centres. The ‘great central (or blue) banana’ is a well-known concept in the literature; various studies on economic growth regions have identified this shape, covering an area from London via Randstad through industrial areas of Germany and Switzerland to northern Italy. In addition to the ‘banana’, we find a ‘small Nordic potato’ covering the metropolitan areas of Stockholm and Helsinki. The major difference between the two strong European ICT blocs is that the industrial activities in the ‘banana’ are more focused on information technology (IT), whereas the ‘potato’ is more focused on communication technology (CT). It seems that even though our analysis shows a notable country-level specialization in ICT, businesses within the EU are concentrated in the spatial clusters that do not respect national borders. It is currently unclear how the (technological) convergence of IT, CT, consumer electronics, and the content industry will change the locational patterns of European ICT. Until now, developments in the production and use of ICT have clearly been driven by technology. It seems plausible to argue that as the technology goes mainstream, successful competition in the ‘information industry’ will require solid understanding of the dynamics of the content industry, which may in turn require at least some presence of manufacturers and service providers in major centres of content provision. Currently much of the professionally edited content in the Internet originates from Manhattan, San Francisco, or London. Hollywood overwhelmingly dominates the entertainment industry. New York and London are centres of the music business. As far as Europe is concerned, radio, television, newspapers, and magazines are largely national, not least because of linguistic reasons. It is not implausible to argue that in the coming years, the technological convergence will further increase the spatial clustering of ICT production and innovative activity. Kolko (2002), on the other hand, suggests that centrifugal forces dominate in the high IT-intensive US industries after controlling for regional labour force composition and the nature of the industry. Two points are, however, noteworthy: availability of high-skilled labour is indeed one of the key reasons for a firm to locate within a cluster of similar businesses, and that the high-IT industries are not directly comparable to the ICT sector, not least because the latter is largely comprised of manufacturing-related activities. One of the main messages from the policy point of view is that there seems to be a certain path dependence: countries with strong ICT sectors tend to strengthen their positions—leapfrogging is difficult. This underlines the need to avoid wish-driven policies of ‘great leaps forward’ to the forefront of ICT provision. It might be better to build on existing strengths and make the most of ICT use. It is evident that being a large producer of ICT is not a necessary condition for being an advanced user of ICT. In light of economic history the use of new technologies is, in the long run, more important than just provision. This emphasizes the role of diffusion policies. Our data on ICT-related businesses indicate that clustering does not necessarily obey national borders. This implies that focusing on national policies is insufficient and rather underlines the importance of local and/or regional policies in promoting ICT.