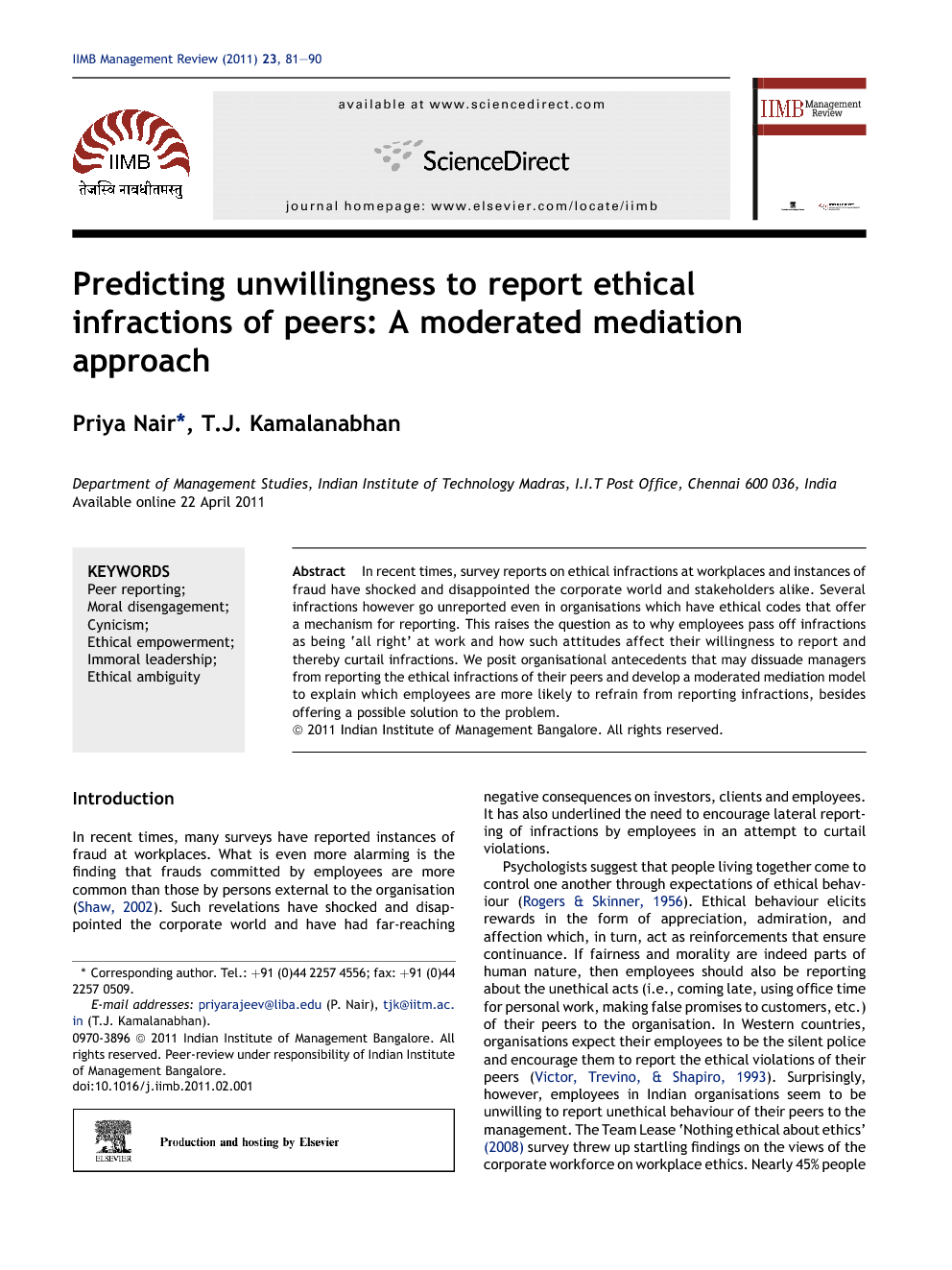 In recent times, survey reports on ethical infractions at workplaces and instances of fraud have shocked and disappointed the corporate world and stakeholders alike. Several infractions however go unreported even in organisations which have ethical codes that offer a mechanism for reporting. This raises the question as to why employees pass off infractions as being ‘all right’ at work and how such attitudes affect their willingness to report and thereby curtail infractions. We posit organisational antecedents that may dissuade managers from reporting the ethical infractions of their peers and develop a moderated mediation model to explain which employees are more likely to refrain from reporting infractions, besides offering a possible solution to the problem.

In recent times, many surveys have reported instances of fraud at workplaces. What is even more alarming is the finding that frauds committed by employees are more common than those by persons external to the organisation (Shaw, 2002). Such revelations have shocked and disappointed the corporate world and have had far-reaching negative consequences on investors, clients and employees. It has also underlined the need to encourage lateral reporting of infractions by employees in an attempt to curtail violations. Psychologists suggest that people living together come to control one another through expectations of ethical behaviour (Rogers & Skinner, 1956). Ethical behaviour elicits rewards in the form of appreciation, admiration, and affection which, in turn, act as reinforcements that ensure continuance. If fairness and morality are indeed parts of human nature, then employees should also be reporting about the unethical acts (i.e., coming late, using office time for personal work, making false promises to customers, etc.) of their peers to the organisation. In Western countries, organisations expect their employees to be the silent police and encourage them to report the ethical violations of their peers (Victor, Trevino, & Shapiro, 1993). Surprisingly, however, employees in Indian organisations seem to be unwilling to report unethical behaviour of their peers to the management. The Team Lease ‘Nothing ethical about ethics’ (2008) survey threw up startling findings on the views of the corporate workforce on workplace ethics. Nearly 45% people in the corporate workforce in eight Indian cities did not object to logging of incorrect entry/exit times and 46.8% felt using the office telephone for personal long-distance calls was fine. Around 60% people lied while applying for leave, supported making tall promises to clients, or considered it okay to take printouts and photocopies at office for personal work. More than 62% admitted to doing personal work during office hours. The fallout of unethical behaviour of employees and the apathy of their peers towards reporting on infractions can critically affect a company’s image, stock value, customer retention, ability to recruit and retain top workers, and ultimately, its ability to compete successfully. Consequently, the authors raise the question as to why employees who notice such infractions are unwilling to report the same in an attempt to curtail potential infractions and salvage their organisations. One explanation for unwillingness to report infractions can be the breakdown of the underlying psychological process of an individual’s moral self-regulation. Regulatory self-sanction when deactivated creates morally disengaged individuals who have a predisposition for detrimental behaviour (Bandura, Barbaranelli, Caprara, & Pastorelli, 1996) and may be more tolerant of infractions. Given this result, we propose a model of unwilling to report ethical infractions of peers to the management. Our model (see Fig. 1) proposes organisational context factors that influence unwillingness of employees to report infractions committed by their peers. We suggest that moral disengagement mediates the relation between organisational antecedents and peer reporting and that employee’ cynicism and level of ethical empowerment moderate the above relationship.

In our view, unwillingness to report peer infractions is caused by several organisational factors and their impact is moderated by cynicism and empowerment. Moral self-regulation or the capacity to exercise some measure of control over one’s thought and actions, when deactivated, translates the effects of these organisational factors into organisationally detrimental behaviour such as not reporting peer infractions when the ethical codes require one to do so. The extent to which employees are ethically empowered as well as their cynical attitudes towards the organisation impact the operation of moral disengagement thereby making way for the moderated mediation model of peer reporting, presented in this paper. A moderated mediation model not only offers the prospect of identifying cynicism among managers as an attitude that aggravates the impact of moral disengagement but more importantly suggests a solution in the form of ethical empowerment which can diminish its influence.