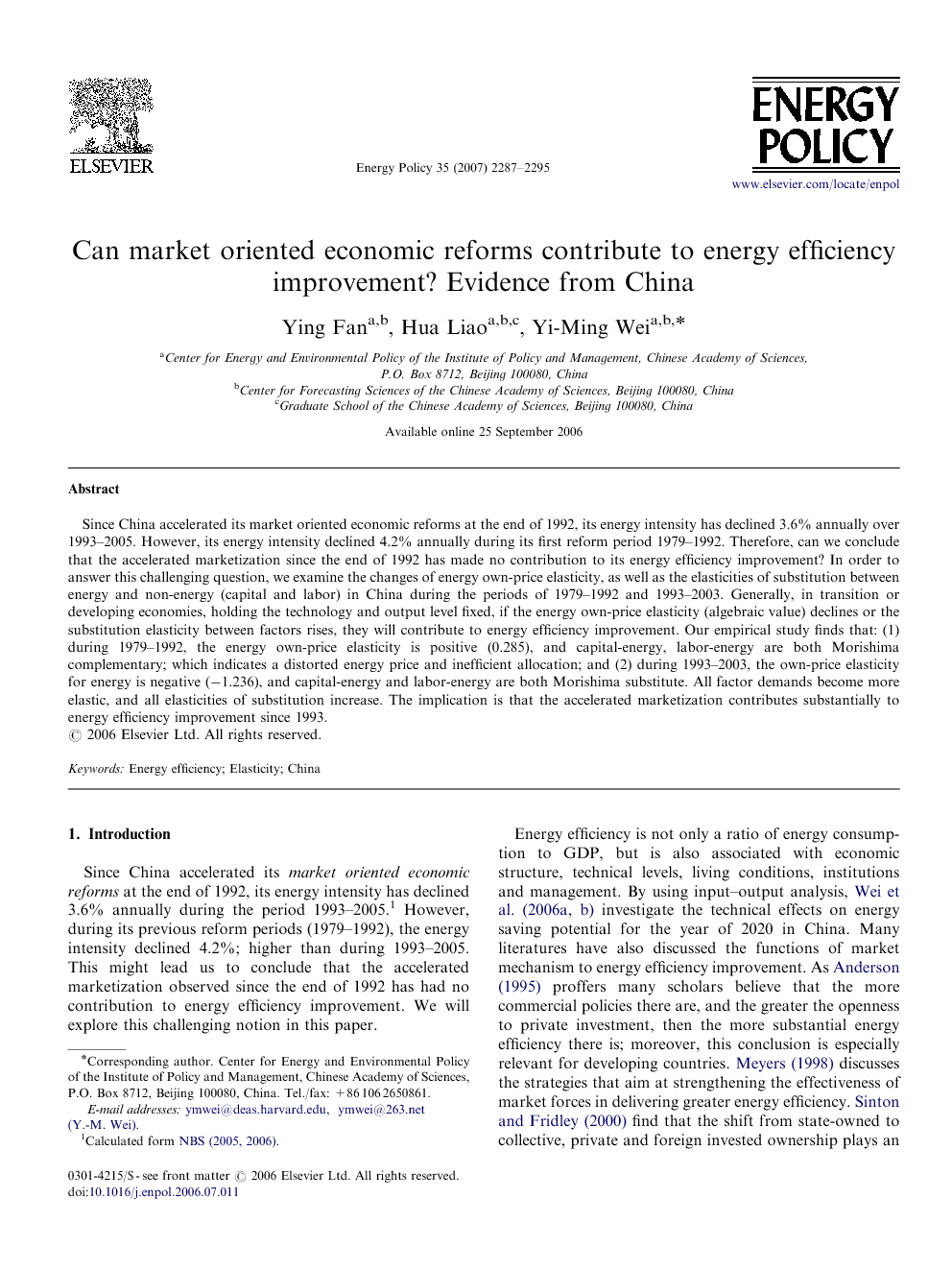 Since China accelerated its market oriented economic reforms at the end of 1992, its energy intensity has declined 3.6% annually over 1993–2005. However, its energy intensity declined 4.2% annually during its first reform period 1979–1992. Therefore, can we conclude that the accelerated marketization since the end of 1992 has made no contribution to its energy efficiency improvement? In order to answer this challenging question, we examine the changes of energy own-price elasticity, as well as the elasticities of substitution between energy and non-energy (capital and labor) in China during the periods of 1979–1992 and 1993–2003. Generally, in transition or developing economies, holding the technology and output level fixed, if the energy own-price elasticity (algebraic value) declines or the substitution elasticity between factors rises, they will contribute to energy efficiency improvement. Our empirical study finds that: (1) during 1979–1992, the energy own-price elasticity is positive (0.285), and capital-energy, labor-energy are both Morishima complementary; which indicates a distorted energy price and inefficient allocation; and (2) during 1993–2003, the own-price elasticity for energy is negative (−1.236), and capital-energy and labor-energy are both Morishima substitute. All factor demands become more elastic, and all elasticities of substitution increase. The implication is that the accelerated marketization contributes substantially to energy efficiency improvement since 1993.

Since China accelerated its market oriented economic reforms at the end of 1992, its energy intensity has declined 3.6% annually during the period 1993–2005. 1 However, during its previous reform periods (1979–1992), the energy intensity declined 4.2%; higher than during 1993–2005. This might lead us to conclude that the accelerated marketization observed since the end of 1992 has had no contribution to energy efficiency improvement. We will explore this challenging notion in this paper. Energy efficiency is not only a ratio of energy consumption to GDP, but is also associated with economic structure, technical levels, living conditions, institutions and management. By using input–output analysis, Wei and Ying et al., 2006a and Wei et al., 2006b investigate the technical effects on energy saving potential for the year of 2020 in China. Many literatures have also discussed the functions of market mechanism to energy efficiency improvement. As Anderson (1995) proffers many scholars believe that the more commercial policies there are, and the greater the openness to private investment, then the more substantial energy efficiency there is; moreover, this conclusion is especially relevant for developing countries. Meyers (1998) discusses the strategies that aim at strengthening the effectiveness of market forces in delivering greater energy efficiency. Sinton and Fridley (2000) find that the shift from state-owned to collective, private and foreign invested ownership plays an important role in improving energy efficiency since 1996 in China. By examining approximately 2500 enterprises in a survey, Fisher-Vanden et al. (2004) find that the reform in ownership and rising energy prices were also the drivers of China's declining energy intensity. By using a dynamic computable general equilibrium analysis, Fisher-Vanden (2003) also argues that further implementation of market reforms in China will result in a structural shift to less carbon-intensive production (also shifting to less energy-intensive production). The market is not just a resources allocation instrument, but also an incentive mechanism. Deregulating energy prices, clarifying and decentralizing property are helpful to optimize energy allocation and motivate energy consumers to reduce wasting, or to choose the most cost-effective energy saving equipments and appliances. Energy price is a significant signal. When it rises, producers will decrease energy consumption by turning to other substitutable factors. It may also induce energy saving technologies or innovations (Jorgenson and Wilcoxen, 1993; Popp, 2002). Except for some market failures, generally in transition or developing economies, holding technology and output levels fixed, the more market-driven or less government planned resource allocation, then the more flexible the economy and the more elastic the factors substitution. de La Grandville (1997) suggests to view the elasticity of substitution as an efficiency parameter. He show that how the rate of growth of an economy was directly linked to the size of the elasticity of substitution. In this paper we will examine whether the accelerated economic reforms raise the elasticity of substitution, and then contribute to energy efficiency improvement. We will investigate the change in energy own-price elasticity, as well as the elasticities of substitution between energy and non-energy (capital and labor) in China during the periods 1979–1992 and 1993–2003. If the energy own-price elasticity (algebraic value) declines and the elasticities of substitution between factors rise resulted from economic reforms, it shows that the accelerated economic reforms contribute to the energy efficiency improvement. The paper is organized as follows. We begin with a brief introduction of energy efficiency, market mechanism and elasticity of substitution. Section 2 describes the methodology and data collection and analysis process. In Section 3, we discuss the empirical results, and put forward some policy implications on improving energy efficiency. We conclude with a summary in the last section.

In this paper, we find that the accelerated market-oriented economic reforms undertaken since the end of 1992 contribute to energy efficiency improvement, because the energy own-price elasticity (algebraic value) declines, and elasticities of substitution and cross price elasticities between energy, capital and labor rise in the period of 1979–2003. By using the revised data from China's First National Economy Census, we estimate the times series capital, labor and energy cost, and their price index during 1979–2003. After a Chow test, we decompose the period into two sub-periods: 1979–1992, 1993–2003, which is also consistent with China's economic reforms stages exactly. Then, we applied translog cost function and seemingly unrelated regression to estimate the MES between capital, labor and energy, as well as their own price elasticity during 1979–1992 and 1993–2003. According to the results, we find that: (1) during 1979–1992, the own-price elasticity for energy is positive (0.285), and the capital-energy, labor-energy are both Morishima complementary, which indicates that the price is distorted and the factors are not allocated effectively; and (2) during 1993–2003, all the factor demands become more elastic. The own-price elasticity for energy is negative (−1.236), and the capital-energy, labor-energy are both Morishima substitutes, which are attributable to the accelerated market-oriented economic reform in China since 1992. It indicates that raising energy price will induce energy conservation. China is currently the second largest energy consumer in the world. Though its energy efficiency has been greatly improved, there is still a long way to go. In order to further improve its energy efficiency, we suggest that China should further its economic reform, especially in the energy industries. Energy price should be raised by using economic measures, such as environmental or resource tax. Even though there are many market failures, the energy efficiency policy should, as far as possible, be based on economic incentives. Due to some market failures, we also admit that some fundamental research and development also should be greatly supported by government. The elasticity of substitution between factors plays a fundamental role in energy efficiency policy research, especially in the computable general equilibrium analysis. We also hope that our work will contribute to further study.