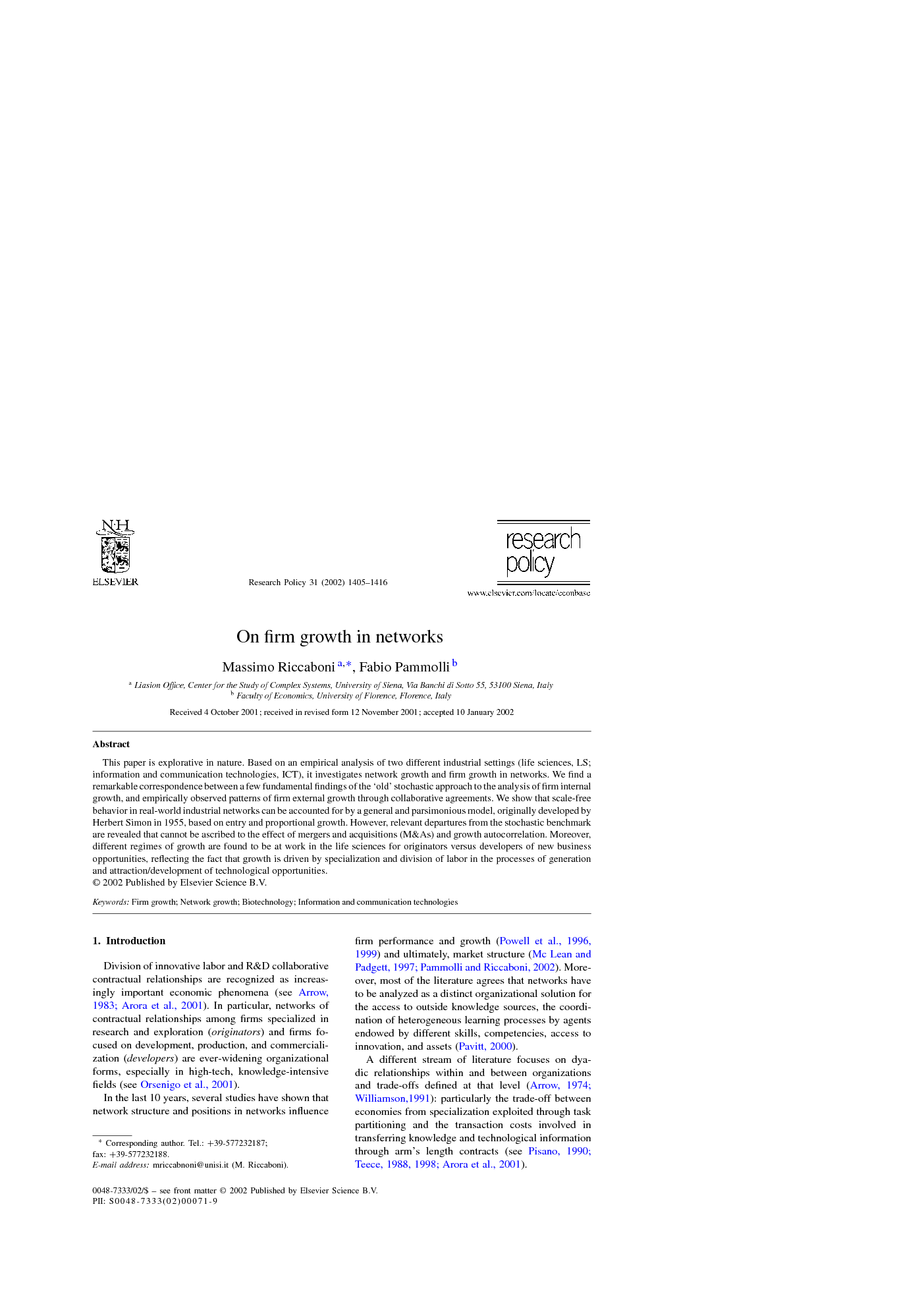 This paper is explorative in nature. Based on an empirical analysis of two different industrial settings (life sciences, LS; information and communication technologies, ICT), it investigates network growth and firm growth in networks. We find a remarkable correspondence between a fewfundamental findings of the ‘old’ stochastic approach to the analysis of firm internal growth, and empirically observed patterns of firm external growth through collaborative agreements.We show that scale-free behavior in real-world industrial networks can be accounted for by a general and parsimonious model, originally developed by Herbert Simon in 1955, based on entry and proportional growth. However, relevant departures from the stochastic benchmark are revealed that cannot be ascribed to the effect of mergers and acquisitions (M&As) and growth autocorrelation. Moreover, different regimes of growth are found to be at work in the life sciences for originators versus developers of new business opportunities, reflecting the fact that growth is driven by specialization and division of labor in the processes of generation and attraction/development of technological opportunities.

Division of innovative labor and R&D collaborative contractual relationships are recognized as increasingly important economic phenomena (see Arrow, 1983; Arora et al., 2001). In particular, networks of contractual relationships among firms specialized in research and exploration (originators) and firms focused on development, production, and commercialization (developers) are ever-widening organizational forms, especially in high-tech, knowledge-intensive fields (see Orsenigo et al., 2001). In the last 10 years, several studies have shown that network structure and positions in networks influence firm performance and growth (Powell et al., 1996, 1999) and ultimately, market structure (Mc Lean and Padgett, 1997; Pammolli and Riccaboni, 2002). Moreover, most of the literature agrees that networks have to be analyzed as a distinct organizational solution for the access to outside knowledge sources, the coordination of heterogeneous learning processes by agents endowed by different skills, competencies, access to innovation, and assets (Pavitt, 2000). A different stream of literature focuses on dyadic relationships within and between organizations and trade-offs defined at that level (Arrow, 1974; Williamson,1991): particularly the trade-off between economies from specialization exploited through task partitioning and the transaction costs involved in transferring knowledge and technological information through arm’s length contracts (see Pisano, 1990; Teece, 1988, 1998; Arora et al., 2001). In general, despite a growing consensus on networks as a distinct organization form and on their importance in innovation, learning, and evolution (see Freeman, 1991), economic models of division of (innovative) labor tend to focus on either standing-alone organizations or dyadic contractual relationships. Correspondingly, the literature on firm growth considers firms as fixed, elementary, and independent unit of analysis to focus on the dynamic properties of a set of quantities associated with them (e.g. sales, employees, innovative outcome, value added). As a consequence, firms’ structure, interactions, collaborations and transformations can hardly be accommodated in the usual dynamical system theoretical models. Against this background, we aim at moving a step forward in the analysis of processes of growth in networks. We consider the links between originators and developers as instances of firm external growth. On the one side, originators discover new technological opportunities and establish contractual relationships that generate income and give access to relevant assets. On the other side, developers rely on collaborations with originators to get access to outside knowledge sources and capture new technological opportunities. We represent size and growth in terms of firms’ connectivity (k) as measured by the number of collaborations established, seen as independent business opportunities of size unity arising over time (see Ijiri and Simon, 1977). Our empirical investigations on growth in networks in the life sciences (LS) and information and communication technologies (ICT) offer a neat picture, revealing the existence of scaling phenomena, with the firm connectivity distribution being well described by a power law of the form N = αK −γ , where N is the number of firms with more than K connections. This result, which is stunningly equivalent to well known empirical regularities on processes of growth in several domains of both natural and social sciences (see Simon, 1955; Albert and Barabási, 2001; Fujita et al., 1999), suggests that an apparently general phenomenon ought to be central in any modeling effort of firms, regions and networks growth. Along this way, we focus on the mechanisms behind the dynamic properties of growing networks and on firm growth in networks, unraveling striking analogies between processes of internal growth and processes of external growth through collaborative agreements. We do show that the scale-free behavior detected in networks of innovators can be accounted for by a very general and simple model, which is rooted in the ‘old’ stochastic approach to the analysis of firm growth. While growing, networks in LS and ICT selforganize into scale-free structures shaped by entry of new firms and by proportional growth of the connectivity of individual firms, with remarkable departures from a regime of universal random growth. In addition, departures from the Pareto distribution in the life sciences sector cannot be ascribed to ‘traditional’ explanatory variables (growth autocorrelation, mergers and acquisitions). In LS, different regimes of specialization and growth are found to be at work for originators versus developers, reflecting differences in the processes of generation versus absorption/ development of technological opportunities. In particular, the population of originators is characterized by a regime of proportional growth which corresponds to a ‘popularity is attractive’ mechanism (see also Zucker et al., 1998), while for developers this mechanism is attenuated by an additional random component. While our preliminary results cannot be fully explained given the present status of our knowledge, they are highly coherent with an interpretation of firm growth and networking activities which is rooted in a competence-based view of organizational growth and division of labor (Penrose, 1995; Richardson, 1972; Nelson and Winter, 1982; Dosi, 2000). The empirical findings presented in this paper—as well as in Orsenigo et al. (2001) and in Pammolli and Riccaboni (2002)—show that processes of network growth are sustained by dynamic complementarities between patterns of specialization in knowledge production (originators) and processes of diversification of in-house capabilities by large multi-product, multi-technological companies (developers, see also Granstrand et al., 1997; Pavitt, 2000). Our analysis points to some basic principles behind the growth of firms in technological networks, providing a simple benchmark for future investigations. In addition, one important feature of our work is related to the fact that, since we are dealing with the dynamics of a set of links, we can exploit the duality of the overall system, extracting topological information which can be used to uncover the underlying causal data generating mechanisms. That is to say, the study of firm growth in systems of division of labor is important also because it enables plausible restrictions on the acceptable classes of conditional predictive distributions and on the dynamics of the processes which generated them, contributing to a better understanding of firm growth in general.

In this paper, we have shown how an extension of stochastic explanations of internal firm size and growth fits a whole range of empirical findings. The scale-free structures that are in place in the two industrial networks that we have investigated can be considered as the outcome of a fairly general ‘popularity is attractive’ principle, which seems to sustain also the growth of systems of division of labor and of firms acting in them. Being very general, mechanisms sustaining external growth in networks do not seem to differ from the ones that sustain firm internal growth. This result is suggestive of the existence of organizational principles that are general in nature, and map on both the internal structure of firms and the structure of markets and networks. Moreover, we have shown how the dual nature of networks can convey information on topological properties of industries and roles/positions of firms within them (to begin with, the distinction between originators and developers), which can be used to understand some fundamental structures, mechanisms, and generative processes behind the growth of firms and industries, in the direction of building parsimonious and, at the same time, realistic, representations. At present, our analysis has some obvious limitations. First, apart from information on firms’ age and on the distinction between originators and developers, we did not take into account any node-specific attribute. Second, we have considered links of size unity, without addressing the properties of weighted networks and interactions strength. Third, the relational propensities of different nodes stay unchanged in our model. Finally, we do not dwell on decay and exit processes with the exception of mergers and acquisitions. These shortcomings notwithstanding, this paper provides a benchmark in the analysis of firm growth in networks. Despite its limitations, it gives a parsimonious and general framework to ‘reverse engineering’ and compare the growth of networks in different industries, as we attempt to make our models more realistic. Some of the current limitations of our analysis could be overcome, in the future, based on a higher availability of data on real systems and, in particular, of detailed topological and economic information on real-world networks. While at present, such data are relatively rare, the increasing interest in industrial networks is leading to the development of suitable data sets, offering further guidance for modeling and interpreting the growth of these complex and important economic systems.