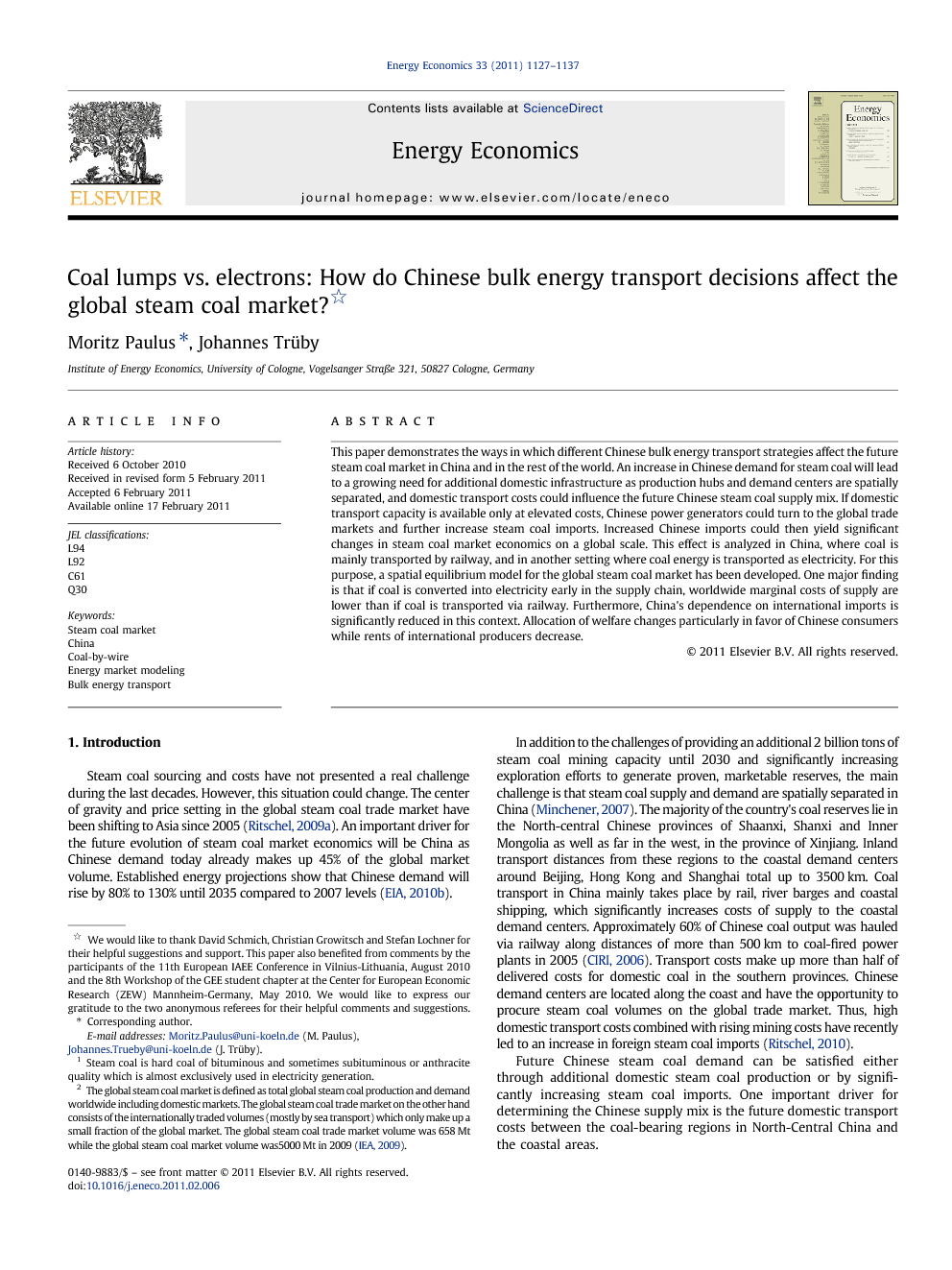 This paper demonstrates the ways in which different Chinese bulk energy transport strategies affect the future steam coal market in China and in the rest of the world. An increase in Chinese demand for steam coal will lead to a growing need for additional domestic infrastructure as production hubs and demand centers are spatially separated, and domestic transport costs could influence the future Chinese steam coal supply mix. If domestic transport capacity is available only at elevated costs, Chinese power generators could turn to the global trade markets and further increase steam coal imports. Increased Chinese imports could then yield significant changes in steam coal market economics on a global scale. This effect is analyzed in China, where coal is mainly transported by railway, and in another setting where coal energy is transported as electricity. For this purpose, a spatial equilibrium model for the global steam coal market has been developed. One major finding is that if coal is converted into electricity early in the supply chain, worldwide marginal costs of supply are lower than if coal is transported via railway. Furthermore, China's dependence on international imports is significantly reduced in this context. Allocation of welfare changes particularly in favor of Chinese consumers while rents of international producers decrease.

Steam coal1 sourcing and costs have not presented a real challenge during the last decades. However, this situation could change. The center of gravity and price setting in the global steam coal trade market have been shifting to Asia since 2005 (Ritschel, 2009a). An important driver for the future evolution of steam coal market economics will be China as Chinese demand today already makes up 45% of the global market volume.2 Established energy projections show that Chinese demand will rise by 80% to 130% until 2035 compared to 2007 levels (EIA, 2010b). In addition to the challenges of providing an additional 2 billion tons of steam coal mining capacity until 2030 and significantly increasing exploration efforts to generate proven, marketable reserves, the main challenge is that steam coal supply and demand are spatially separated in China (Minchener, 2007). The majority of the country's coal reserves lie in the North-central Chinese provinces of Shaanxi, Shanxi and Inner Mongolia as well as far in the west, in the province of Xinjiang. Inland transport distances from these regions to the coastal demand centers around Beijing, Hong Kong and Shanghai total up to 3500 km. Coal transport in China mainly takes place by rail, river barges and coastal shipping, which significantly increases costs of supply to the coastal demand centers. Approximately 60% of Chinese coal output was hauled via railway along distances of more than 500 km to coal-fired power plants in 2005 (CIRI, 2006). Transport costs make up more than half of delivered costs for domestic coal in the southern provinces. Chinese demand centers are located along the coast and have the opportunity to procure steam coal volumes on the global trade market. Thus, high domestic transport costs combined with rising mining costs have recently led to an increase in foreign steam coal imports (Ritschel, 2010). Future Chinese steam coal demand can be satisfied either through additional domestic steam coal production or by significantly increasing steam coal imports. One important driver for determining the Chinese supply mix is the future domestic transport costs between the coal-bearing regions in North-Central China and the coastal areas. The primary energy carrier coal can be transported via railway or can be converted on-site to electricity which is then transported via HVDC lines to the main consuming regions. Currently, China mainly relies on railway expansion projects to significantly increase its coal transport capacity (Sagawa and Koizumi, 2007 and Minchener, 2004) from the West to the Eastern regions. Even though China has been able to rapidly expand its railway infrastructure during recent years to cope with the majority of the rising coal transport, railway transport is comparatively expensive (Minchener, 2004). Another transport option for China is investment into large-scale HVDC transmission in combination with mine-mouth coal-fired power plants in the North-Central coal-bearing provinces. Such an energy transport system could significantly reduce variable transport costs and could supply coal-based energy to the Chinese coastal demand centers. Unfortunately, large-scale deployment has so far been hindered by weak central energy planning institutions as well as regulatory schemes that provide few incentives for Chinese grid companies to invest in power transmission (Fedor, 2008 and MIT, 2007). Nevertheless, the need for a coherent domestic energy transport strategy remains pressing, particularly regarding the continuing consolidation process in the Chinese coal industry (Peng, 2011). Initiated by national reform efforts to enhance work safety and efficiency of the entire industry, recent policy implementation has led to the closing or merging of small and inefficient coal mines, thus improving economies of scale (ESMAP, 2008 and NDRC, 2007). Consequently, the share of small coal mines in total domestic production dropped significantly from 19.9% (342 Mt) in 2003 to 2.1% (55 Mt) in 2008 (CIRI, 2008). In addition to the permanent increases in national coal trade volume in recent years, this might have proven to be an additional burden to the prevalent energy transport system, since the restructuring process results in a concentration of production in remote regions in the North and North West of China (Lester and Steinfeld, 2006). Taking these implications of the policy of increased efficiency in the coal industry into account, setting up HVDC transmission lines might as well be regarded as a logical extension in an overall strategy for improvement of energy efficiency. The analysis focuses on the two effects of the two outlined bulk energy transport investment strategies in China: firstly, how is the future Chinese steam coal supply mix affected by different bulk energy transport modes? Secondly, what are the implications of the change in the Chinese coal supply mix for the world steam coal market? Hence, the paper will look at the future Chinese coal supply mix, at the global long-run marginal costs of steam coal in China and several important world market regions, at the worldwide mining investments and utilization as well as at the global welfare effects. To analyze these parameters, a spatial equilibrium model which minimizes total costs of global steam coal demand coverage is developed and presented. This global modeling approach makes it possible to obtain answers to the proposed research questions, including feedbacks and interdependencies between worldwide market actors. The model is validated for reference years 2005 and 2006. Then, two scenarios for possible future transport infrastructure investment decisions in China are investigated: one scenario assumes further investment in railroad transport to move coal energy to the demand centers. The second scenario assumes large-scale investment in HVDC transmission lines combined with mine-mouth coal-fired power plants and transmission of electricity to the demand hubs. Then, steam coal flows and marginal supply cost patterns for both scenarios are projected up to 2030. The remainder of the paper is structured to include seven sections: after a round-up of relevant literature regarding supply cost modeling and coal market analyses in Section 2, the current situation in the steam coal trade market will be shortly described in Section 3. Then, the model is introduced in Section 4. Section 5describes the underlying dataset. Section 6 depicts the scenario assumptions, and Section 7reports model results. Section 8 concludes the paper.

This paper analyzes the influence of Chinese bulk energy infrastructure investment decisions on the steam coal supply mix in China and on investment and welfare spillover effects in the world market. A spatial equilibrium model which includes domestic markets for China and the U.S. as well as the main importers and exporters is presented. Proxies for future marginal costs of supply are based on a rigid cost structure decomposition which allows us to deduct future supply cost estimates based on assumptions of input price evolutions. The paper then analyzes two scenarios with different assumptions of future Chinese energy transport investment policy; in one scenario it is assumed that current railway expansion will continue in the future as rapid realization of HVDC transmission lines is hindered by existing organizational and regulatory barriers. In the other scenario, it is assumed that hurdles for HVDC investments in China are reduced. Thus, rapid implementation of transmission lines in combination with new coal-fired power stations close to the mines can take place on a very large scale. According to the results, such infrastructure decisions yield a significant change in LRMC for China by up to 33% in 2030. China is able to feed its domestic steam coal demand through own production in the scenario with HVDC build-up. Therefore, it crowds out foreign steam coal volumes mainly originating from Australia and Indonesia. In the case of coal transport by railway, China will have to import significant quantities that make up about 30% of the steam coal trade market volume in 2030. LRMC for steam coal in Europe and Japan change only moderately between both scenarios. The reason for this is that one high-cost supplier (USA) is exchanged for another (Russia). Analysis shows that large-scale investments into HVDC transmission until 2030 yield mostly positive economic effects, especially for China. This result should encourage Chinese policy makers to rapidly overcome the hindrances this large-scale infrastructure project currently faces; China's national institutions engaged in energy are fragmented and do not coordinate well. Aspects like setting electricity and fuel prices as well as the approval of large infrastructure investments are divided among many different departments. To give such a large-scale national infrastructure project a good chance of rapid realization, the national government would have to cut into this well-established web of local decision makers and form a central energy planning institution which has enough executive power. As steam coal consumers profit on a global scale of the Chinese HVDC transmission lines, results should encourage large utilities or energy-intensive industries to support Chinese grid investment efforts. Support could mean either helping to finance such projects or to provide, if needed, technological expertise in the field of high-voltage or even ultra-high-voltage transmission. International mining companies will face increasing price pressure from the higher competitiveness of Chinese steam coal supply in the case of HVDC investments. This implicates the need for mining companies to strengthen their exploration efforts in order to generate proven reserves which are cheap to mine. It is suggested that further research investigate in more detail how the steam coal supply mix of the other main world market actors like Europe, Japan and the U.S. is influenced by Chinese infrastructure decisions. In this context, it would be especially interesting to see how such feedback affects power plant investment decisions in the important import regions in the long run. Another research venue could be to investigate how potential future market players like Mozambique, Botswana or Madagascar influence these results, especially regarding spatial distribution of mine investment decisions.